The death toll from torrential rains in western Japan last week reached 200 on Thursday as more bodies were found following the downpours that have caused floods and landslides and left thousands still in shelters.

The number of casualties announced by the National Police Agency could grow further as dozens of others are still missing, according to local authorities. Of the 200 deaths, more than half occurred in Hiroshima and neighboring Okayama prefectures, according to a Kyodo News tally.

More than 70,000 rescuers continued to search for the missing in the affected areas, including the hardest-hit regions in Hiroshima, Okayama and Ehime prefectures.

About 7,000 people remained in shelters as of noon Thursday, according to the Fire and Disaster Management Agency. The number has dropped from 42,000 evacuated at one point Saturday.

Many aid supplies and volunteers began arriving in affected areas, although a local official in Kurashiki, Okayama Prefecture, said there are "not enough people or vehicles" to distribute the abundant supplies.

"Since they are supplies given by people nationwide, we want to deliver them swiftly to accommodate the needs of evacuation centers," the official said.

As the sky cleared up, temperatures rose above 30 C in many places, raising concerns about possible heatstroke and spread of infectious diseases among evacuees and rescuers as well as volunteer workers entering the areas.

"I get muddy and sweaty when I clean up my house, but I cannot do laundry or even take a bath," said Midori Yamaguchi, 72, in Kurashiki, where a water outage continued. 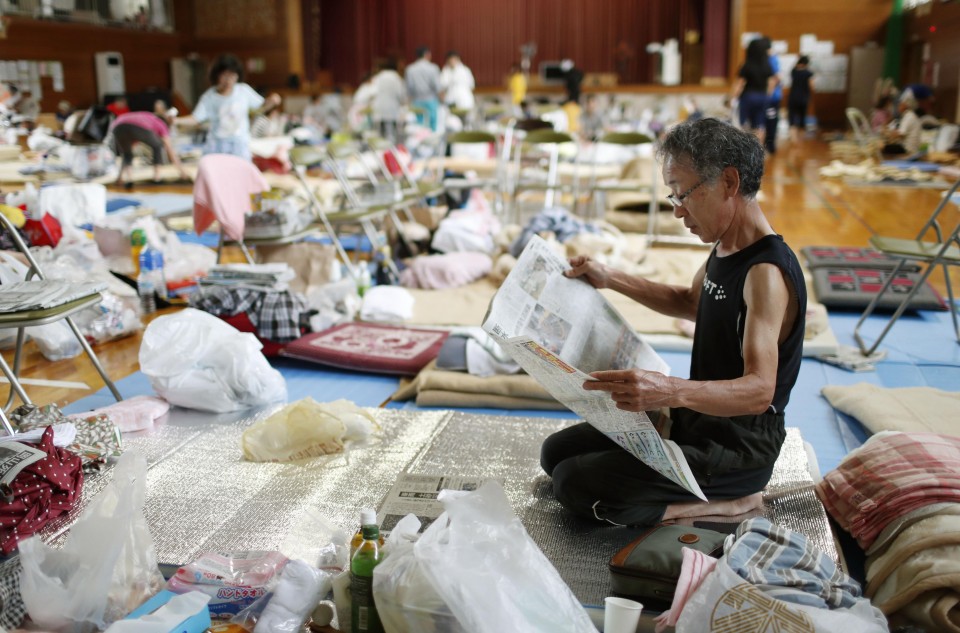 While electricity and gas supplies have been restored for almost all of the affected households, 235,000 homes were still without tap water on Thursday, a week after the downpours began.

"At first I was grateful just for my life being saved, but a week has passed and I started to feel more worried about the future," said Akiko Inuma, 62, at an evacuation center in the city of Okayama.

Many of the evacuation centers have been set up in school gymnasiums, where air conditioning is not in place, prompting evacuees to use paper fans.

Some people were already feeling unwell in the summer heat as they waited in line outside for a water supply truck at an evacuation center in Mihara, Hiroshima Prefecture, despite a portable air conditioning device cooling the spot.

To help efforts to maintain public health, the government's Disaster Health Emergency Assistance Team started working in Kurashiki on its first mission since its inception in March.

"We want to demonstrate what we have been training for as a center for summarizing and resolving problems such as food poisoning at evacuation centers and secondary damage accompanying prolonged evacuation," said doctor Yoko So, who leads the team of public health experts. 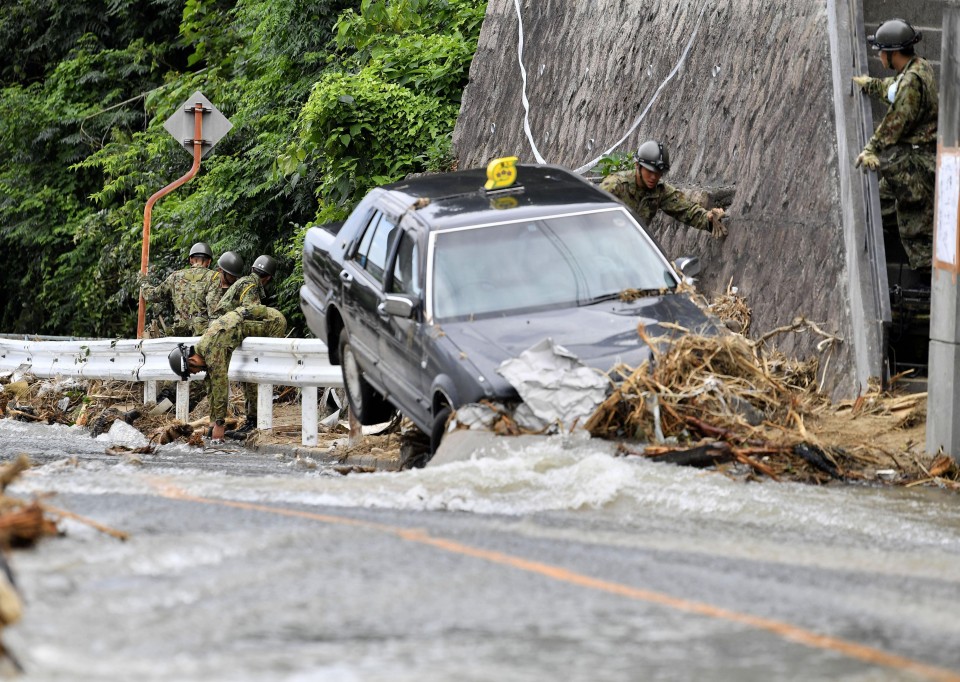 The government, which has also set up a disaster response task force, said Prime Minister Shinzo Abe will visit Ehime Prefecture on Friday after visiting Okayama Prefecture on Wednesday.

"I saw the tremendous scars (left by the rain)," Abe said about his Okayama trip in the task force's meeting, while revealing the government has secured about 71,000 dwellings as temporary housing for people affected by the disaster.

Parts of the region saw as much as four times the average July rainfall during 11 days through Sunday, the Japan Meteorological Agency said.

Many locations logged the heaviest rainfall on record for 24-hour, 48-hour and 72-hour periods as a rain front hovered over Japan and a typhoon neared the archipelago, according to the agency.

"The torrential rains that hit western Japan occurred with an extremely complex mechanism, and they cannot be explained by just one reason such as global warming," said Ryuichi Kawamura, a meteorology expert and a professor at Kyushu University.

The rain has severed transportation in the region, with the transport ministry saying West Japan Railway Co. and other railway operators of 27 train lines suffered damage at more than 100 locations.

As of Thursday morning, most of the operators said they were unable to resume train services within the next few days, with some struggling to gather enough people to check the safety of their tracks and related facilities. 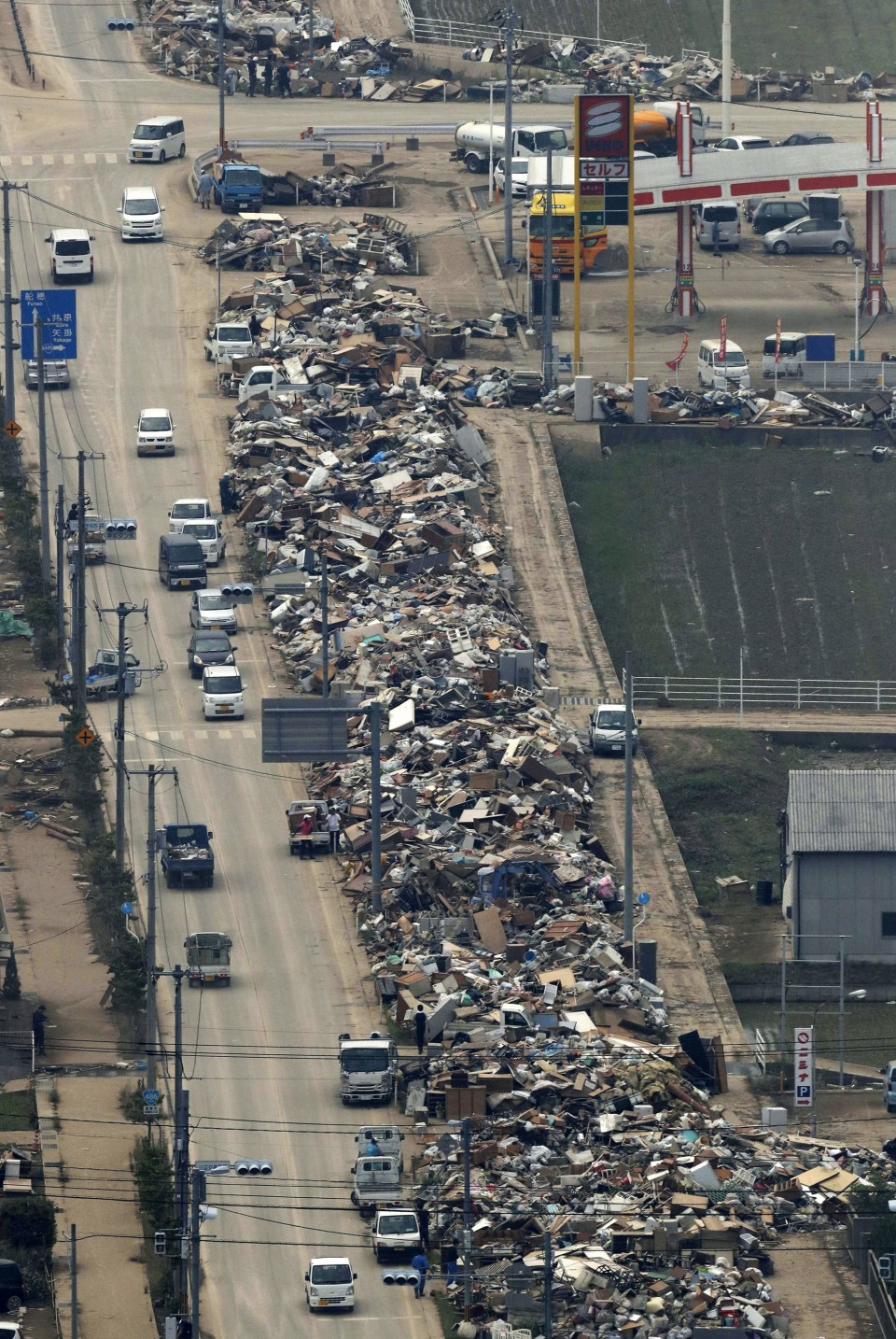 "This is the first time damage has extended to such a wide area since the (2011) Great East Japan Earthquake," said an official of the Land, Infrastructure, Transport and Tourism Ministry.

Many railway tracks have been hit by mudslides and floods while some suffered damage from trees and power poles falling over, according to the ministry.

Even after the rains stopped, the threat of reservoirs bursting continued to haunt the region.

Cracks were found on the banks of a reservoir in Hiroshima a few days after the torrents of rain, prompting local authorities to instruct residents nearby to evacuate.

"Even after the rain is gone, water carrying earth and sand continues to flow down from mountains. Even if it is sunny, we want people to be on alert and continue monitoring the ever-changing situation," an official at the Hiroshima prefectural government said.