Japan executed Thursday all six former members of the AUM Shinrikyo doomsday cult who remained on death row following the execution of founder Shoko Asahara and six other members earlier this month, the justice minister said.

The six were convicted of involvement in one or more of three crimes -- the 1995 sarin nerve gas attack on the Tokyo subway system, another sarin attack in Matsumoto, Nagano Prefecture, in 1994, and the murders of a lawyer, his wife and their baby son in 1989.

"The suffering of the victims, bereaved families and those who survived is unimaginable," she said.

Asahara, the mastermind of the series of crimes committed by the cult, was executed along with six of his former followers on July 6, nearly 12 years after his death sentence was finalized by the Supreme Court in September 2006.

The crimes, which courts said were committed to further Asahara's bid to "control Japan in the name of salvation," resulted in the deaths of 29 people among a total of over 6,500 victims.

While the first group of executions sparked criticisms from other countries and human rights groups, victims of the AUM crimes and their families largely welcomed them and the latest executions.

The unprecedented executions of 13 people in a single month were carried out as the country prepares for the abdication of Emperor Akihito in April 2019, which will end the current Heisei era that started after Emperor Hirohito's death in 1989. The authorities decided to draw the curtain on the most infamous crimes of the period before the era comes to a close, according to sources.

Chief Cabinet Secretary Yoshihide Suga told a press conference the justice minister "must have made the decision in light of upcoming schedules among various other factors." 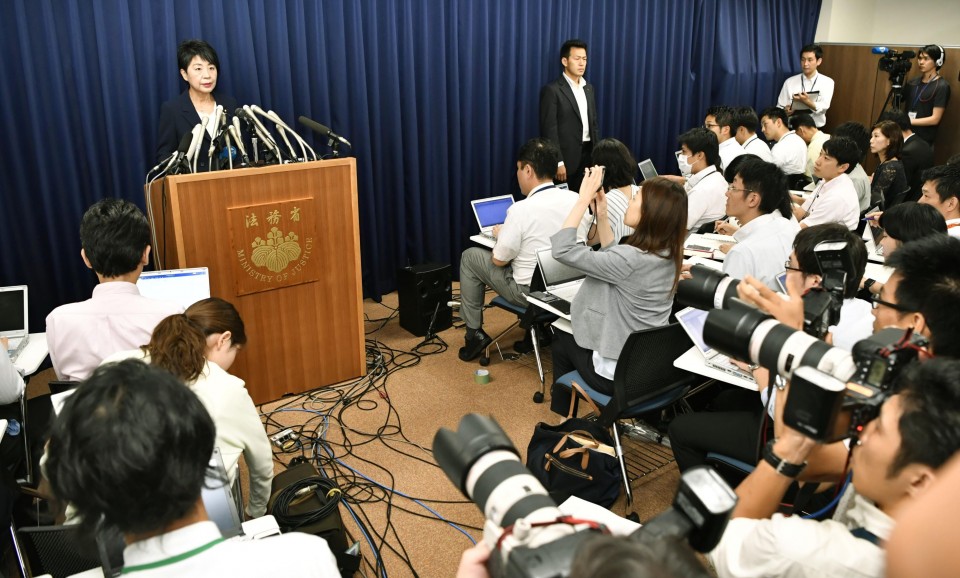 Trials over the cult's crimes ended this January, meaning there was no need to keep the executions of the 13 on hold for trials of accomplices.

All 13 AUM death row inmates were initially kept at the Tokyo detention center, but seven of them were transferred to other facilities across the country in March, fanning speculation they could be executed anytime.

The order in which the inmates were executed apparently reflects ranks within the cult as the first group of inmates put to death were the leader and senior members who were described as ministers or secretaries in the cult, which adopted an organizational structure resembling the national government.

The six hanged Thursday apparently knew of the executions of the first group, and some appeared to be calm and ready for their own executions, their supporters and people close to them said.

Yokoyama, who met with his lawyer on July 13, appeared unaffected by reports on the execution of the first group, agreeing with a smile to the lawyer's remark that he could also be hanged soon, according to the lawyer.

Hayashi's lawyer released a statement saying his client "felt sincerely sorry for the victims and bereaved families" until the end, saying he had been urging followers to leave the cult.

Lawyer Taro Takimoto, who was subjected to an AUM sarin attack, wrote on his blog he wondered how the latest six must have felt after the executions of Asahara and the others, and said just executing Asahara "would have sufficed" as the 12 others were merely working as hands and feet of the mastermind.

During their trials, some of the men's lawyers claimed they were under mind control. AUM followers at the time were forced to obey the orders of senior members and those who did not were confined, drugged or subjected to other punishments.

AUM evolved from a yoga school established by Asahara in 1984 and had about 1,400 live-in followers and over 10,000 lay followers at its height.

The doomsday cult also attracted over 30,000 other followers in Russia, which designated the group a terrorist organization in 2016. A senior member was arrested in Russia in May for recruiting others, indicating it is still active overseas.