While hailing the summit between the U.S. and North Korean leaders as a meaningful step toward the denuclearization of the North, Japan has grown uneasy over U.S. President Donald Trump's abrupt promise to halt U.S.-South Korea military drills.

For U.S. allies Japan and South Korea, military exercises conducted with the United States have been perceived as sending out deterrent messages to the region and serving as a tool to pressure North Korea into giving up its nuclear and missile ambitions.

But in what can be seen as a concession to North Korea, Trump said at a press conference after the summit on Tuesday in Singapore, "We will be stopping the war games (with Seoul), which will save us a tremendous amount of money, unless and until we see the future negotiation is not going along like it should." 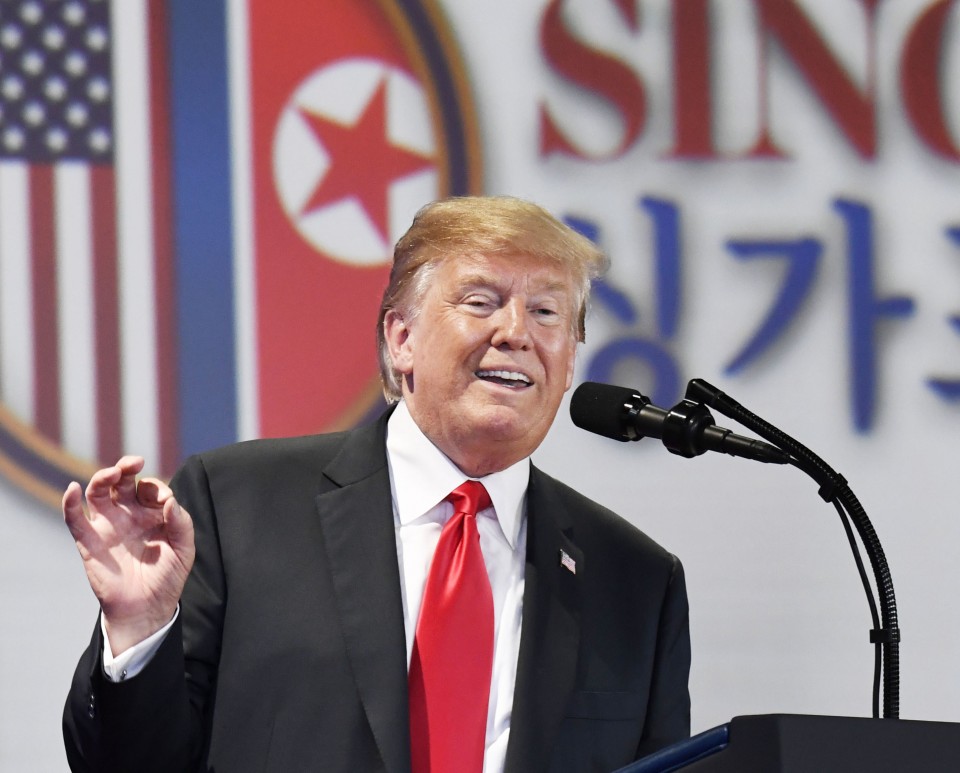 Trump also echoed North Korea's view that the exercises are "provocative" and even touched on his hope to see an eventual scaling back of the U.S. troop presence in South Korea, which remains technically at war with the North since the 1950-1953 Korean War ended in an armistice, not a peace treaty.

Defense Minister Itsunori Onodera said Wednesday Japan is not in a position to comment on the military drills of other countries, but added, "The U.S.-South Korean exercises and U.S. forces in South Korea play significant roles for the security of East Asia."

He also indicated that he had not expected the issue of U.S. forces in South Korea to be on the agenda during the Trump-Kim meeting, saying he had heard that the issue would not be raised from his U.S. counterpart Jim Mattis in a recent bilateral meeting.

"The unpredictable Mr. Trump has created a stir on a matter we had not expected," a Japanese Defense Ministry source said.

North Korea has traditionally linked its pursuit of nuclear weapons to what it calls "hostile" U.S. policy, referring to the 28,500 American troops stationed in South Korea and the provision of "nuclear umbrella" defense to Seoul in line with their bilateral alliance.

The U.S. forces in South Korea and the South Korean military have stood together for more than 60 years maintaining the armistice signed after the Korean War, in which the U.S.-led United Nations forces fought alongside South Korea against a North Korean invasion supported by China and the Soviet Union. 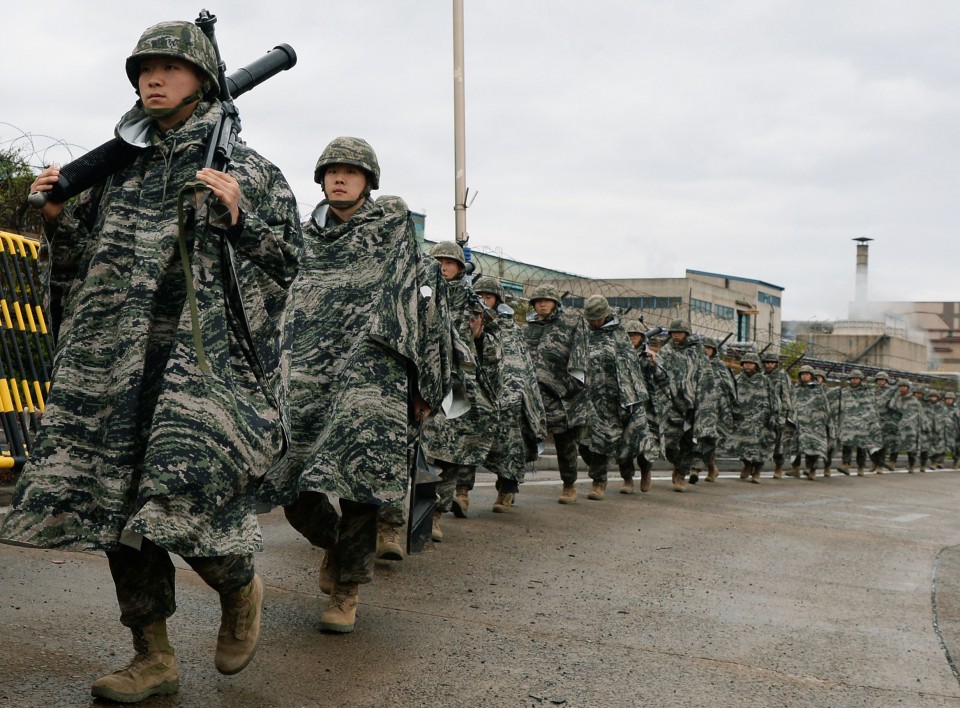 In the event of an emergency on the Korean Peninsula, the South Korean military would effectively operate as part of U.S. forces, which would take control of military operations. To improve their readiness, they conduct joint exercises, large and small, a few dozen times every year.

The joint exercises have also been used as a bargaining chip between the United States and North Korea.

Pyongyang at that time promised to freeze its nuclear program in return for aid, but the accord later collapsed when Washington accused Pyongyang of secretly enriching uranium.

While it is not clear whether Trump was referring to the halt of all military exercises with South Korea or only major ones, a senior Japanese Self-Defense Forces member expressed concerns that the absence of exercises could directly affect the two militaries' ability to fight in actual warfare.

A senior U.S. military official, meanwhile, has told U.S. media that military training can be carried out in Japan, if not South Korea, and that nuclear-capable bombers may frequently fly to Japan in that case.

During the press conference Tuesday, Trump also expressed hope that the Korean War "will soon end."

The formal end of the war may make it difficult to justify the need to maintain the U.S. military presence in South Korea, and its reduction would certainly affect the operations of the 50,000 U.S. troops stationed in Japan, also tasked with playing key roles during contingencies on the Korean Peninsula. 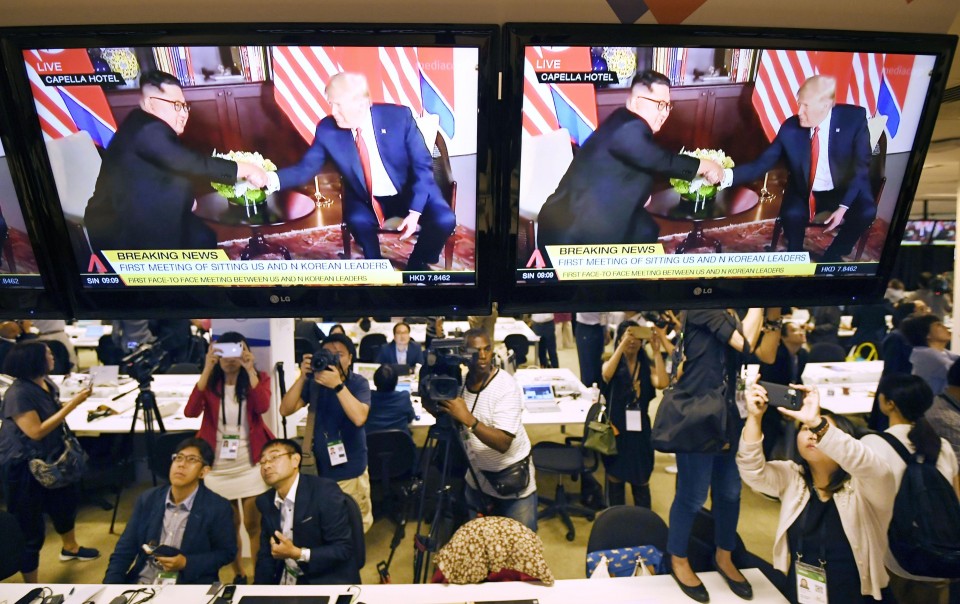 Some Japanese security experts were critical of the outcome of the landmark summit, with Yoji Koda, a retired vice admiral of Japan's Maritime Self-Defense Force, saying Trump appears to have won too little and given away too much through his talks with Kim.

North Korea's promise on denuclearization was vague in contrast with the U.S. push to achieve "complete, verifiable and irreversible denuclearization," while Trump's remarks on U.S.-South Korea military exercises and the U.S. forces stationed in South Korea were degrading enough to upset his own country's people in service, Koda said.

"Mr. Trump described the exercises as costing too much money and threatening to North Korea...These words must have been intolerable for service members. The president may have made the remarks as a result of being carried away by the elevated mood (of the historic event), but still they are the words of a president and cannot be discounted," Koda said at a symposium organized by Japanese think tank Genron NPO on Wednesday.