Chinese President Xi Jinping and North Korean leader Kim Jong Un confirmed Tuesday that it is important for an agreement signed by U.S. President Donald Trump and Kim to be steadily implemented to achieve denuclearization on the divided peninsula.

Xi and Kim held their third summit talks in as many months in Beijing, state-run television reported, just one week after the first-ever Washington-Pyongyang summit in Singapore, in the latest sign of the increasingly strong ties between China and North Korea.

Kim, meanwhile, was quoted by the state broadcaster as telling Xi that North Korea will realize nuclear disarmament in a phased manner, although Washington says economic sanctions against Pyongyang should be lifted only after it attains "complete denuclearization."

If the United States and North Korea can implement the agreement reached at their June 12 summit "step by step," denuclearization on the Korean Peninsula "will open up a new and important situation," Kim told Xi, according to the official China Central Television.

Xi was quoted as telling Kim that China "highly evaluated" the results of the U.S.-North Korea summit and that the country will "play a constructive role" in creating peace on the peninsula, indicating his eagerness to be actively involved in the issue.

At the Singapore summit, Kim reaffirmed his pledge to the complete denuclearization of the Korean Peninsula, while Trump promised to provide security guarantees to North Korea.

Kim is believed to be trying to secure concessions, such as the easing of sanctions, from the United States, in exchange for vowing to denuclearize in a "phased" and "synchronized" manner. 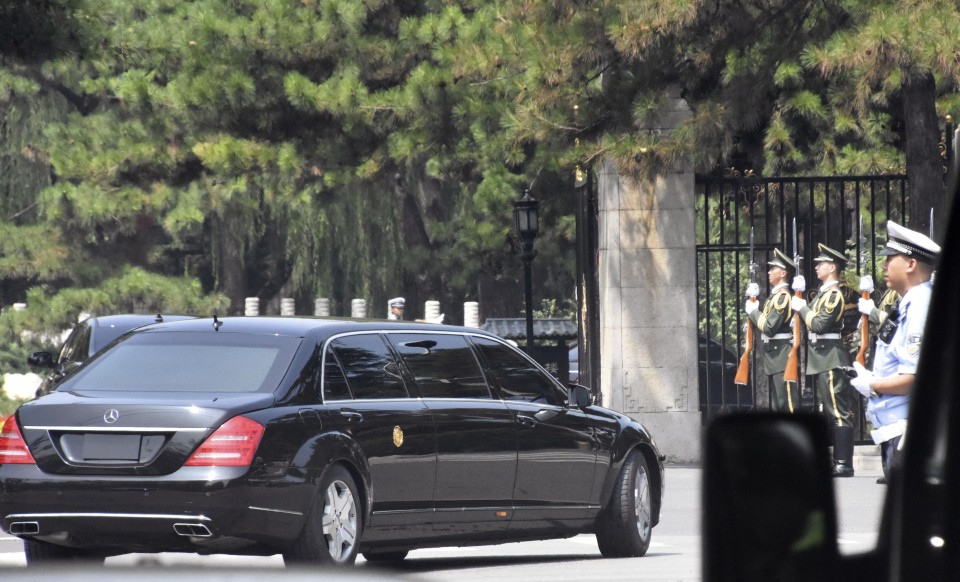 Kim is visiting China for two days from Tuesday, CCTV said in the morning, as a plane thought to be carrying him arrived in Beijing.

His wife, Ri Sol Ju, and high-ranking officials including Kim Yong Chol, a senior ruling party official who held talks with Trump at the White House earlier this month, are accompanying Kim.

The North Korean leader is making his third visit to China since assuming power in 2011.

A vehicle thought to be carrying Kim was seen entering the Diaoyutai State Guesthouse on Tuesday, where foreign dignitaries usually stay on their trips to Beijing.

Earlier in the day, an Air Koryo freight plane previously used to haul Kim's limousine to Singapore for the summit also arrived at Beijing International Airport.

In March, Kim met with Xi in Beijing on his first foreign trip since becoming supreme leader following the death of his father Kim Jong Il in 2011. The two met for two days in May again in the northeastern Chinese city of Dalian.

The arrival of the plane thought to be carrying Kim came within hours of the United States and South Korea announcing that they are suspending a major joint military exercise held every August, which North Korea has denounced as a rehearsal for invasion.

China is known as Pyongyang's main economic lifeline. It has shown willingness to be involved in U.S.-North Korean denuclearization talks, having provided chartered aircraft for Kim to travel to and from Singapore for the Trump-Kim summit.

China and North Korea, which fought together in the 1950-1953 Korean War against the U.S.-led United Nations Command, have been described as "blood brothers."

Relations between Beijing and Pyongyang have improved markedly since Kim's first trip to China in March.

Bilateral ties had, prior to then, grown distant and strained over Beijing's enforcement of crippling economic sanctions imposed by the U.N. Security Council for North Korea's continued development, in defiance of international warnings, of ballistic missiles and nuclear weapons.

Kim likely aims to obtain support from Xi ahead of full-fledged negotiations with the United States. Senior U.S. and North Korean officials, such as Secretary of State Mike Pompeo, are expected to hold talks as early as this week.

Pompeo met with Chinese Foreign Minister Wang Yi and Xi in Beijing on Thursday to brief them about the Trump-Kim summit.