A nuclear reactor at a trouble-hit complex in southwestern Japan restarted operations Saturday for the first time in more than six and a half years amid lingering safety concerns.

The No. 4 unit at the Genkai plant in Saga Prefecture is the fourth reactor of operator Kyushu Electric Power Co.'s to go back online and the ninth nationwide under stricter safety rules implemented after the Fukushima crisis in 2011. The utility aims to generate and supply electricity from Wednesday and start commercial operations in mid-July.

The restart sparked local protests, with around 100 people gathering in front of the plant.

Hajime Aoki, an 80-year-old farmer living about 6 kilometers away from the plant, said, "Everyone knows that nuclear plants are dangerous. If I think about the Fukushima nuclear accident, I certainly cannot agree to this."

Recognizing the opposition of the local residents, Saga Gov. Yoshinori Yamaguchi promised to deal with the issue seriously, while Michiaki Uriu, president of Kyushu Electric, separately said the plant's operation will proceed by taking into account "safety as a top priority."

At the same time, there were some residents who said that while they were worried about plant safety, they also saw the economic benefits to having such plants in the area. 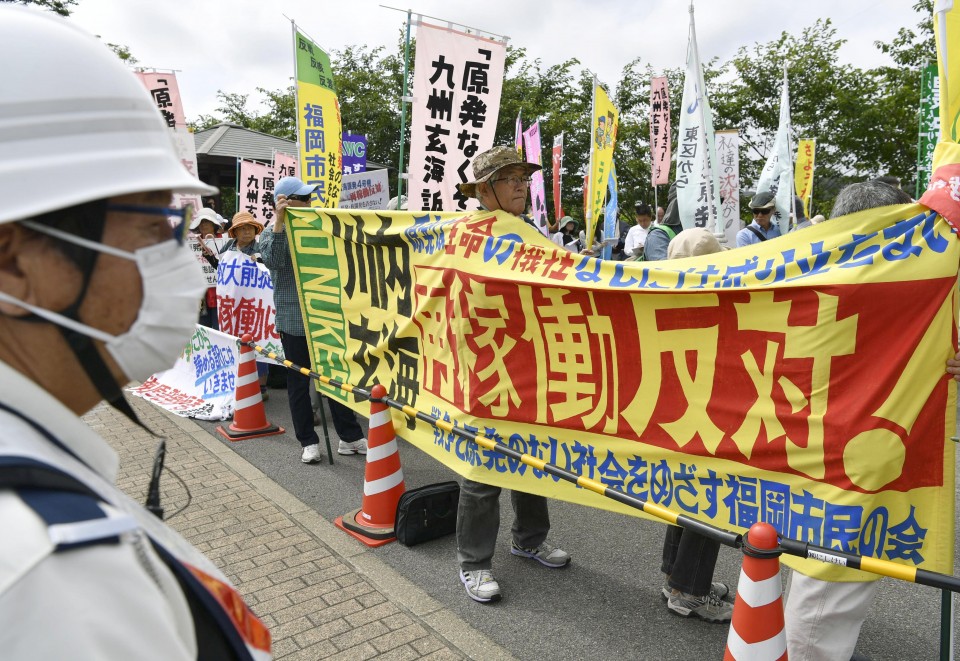 (Protesters in front of the entrance to Genkai nuclear plant)

The restart comes after the Genkai complex has been mired in troubles. In May, pumps installed to control the circulation of cooling water at the No. 4 unit suffered malfunctions, following a steam leak from a pipe at the No. 3 reactor just a week after it was reactivated in March.

Kyushu Electric estimates cost savings of 11 billion yen ($100 million) per month due to the restarts of the No. 3-4 units at Genkai, as this will reduce its reliance on thermal power generation.

The No. 4 unit, which began undergoing a regular checkup in December 2011, won approval for restart by the Nuclear Regulation Authority in January 2017 under the tougher rules implemented after the accident at the Fukushima Daiichi complex, triggered by the March 2011 earthquake and tsunami disaster.

Some local residents opposed to the Genkai plant's operation question the validity of safety standards and cite the risk of volcanic eruptions in the region. The Saga District Court rejected in March a request for an injunction to suspend the plant's restart.