North Korean leader Kim Jong Un and U.S. President Donald Trump arrived in Singapore on Sunday ahead of the first-ever summit between Washington and Pyongyang that could determine the future of peace and stability in the Asia-Pacific region.

Trump's Air Force One touched down at an air base at around 8:30 p.m., having flown some 17 hours from Quebec, Canada, where he cut short his participation in the Group of Seven meeting.

"The entire world is watching the historic summit" between North Korea and the United States, Kim told Lee through an interpreter.

At the summit, Kim is likely to discuss with Trump how to denuclearize on the Korean Peninsula and whether to formally end the 1950-1953 Korean War. 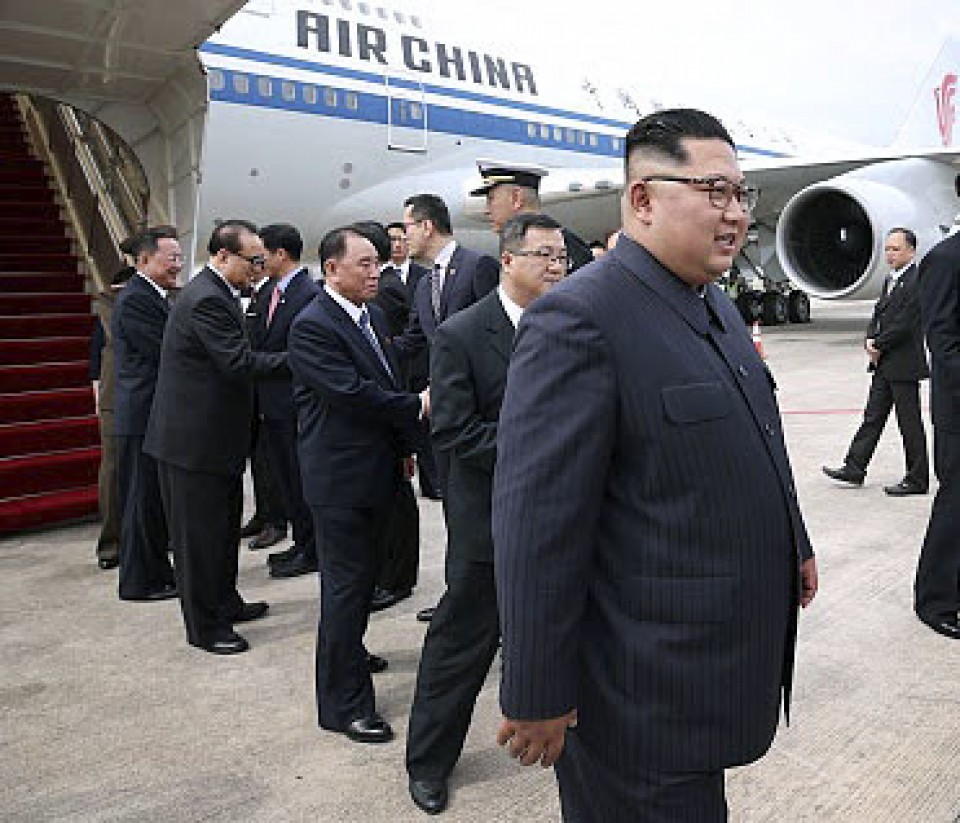 [Courtesy of the Singapore Government]

Prior to its abrupt diplomatic outreach in recent months, North Korea carried out ballistic missile and nuclear tests at a rapid pace in recent years in defiance of international warnings, escalating tensions between Washington and Pyongyang.

Kim landed around 2:30 p.m. at Changi airport. Kyodo News subsequently confirmed his arrival at the St. Regis Hotel in central Singapore, where he and his delegation are expected to stay.

Strict security was in place around the luxury hotel, with dozens of police officers and bodyguards being posted.

"Welcomed Chairman Kim Jong Un, who has just arrived in Singapore," Singapore Foreign Minister Vivian Balakrishnan said in a Twitter post with a picture of them shaking hands at the foot of an airplane boarding ramp.

Kim Yo Jong, Kim's sister and close aide, and Kim Yong Chol, a senior ruling party official who held talks with Trump at the White House earlier this month, were confirmed to be accompanying the leader.

U.S. and North Korean officials have been making final arrangements for the historic summit at the resort island of Sentosa, with the focus on whether Washington and Pyongyang will alleviate security tensions and eliminate the threat of war. 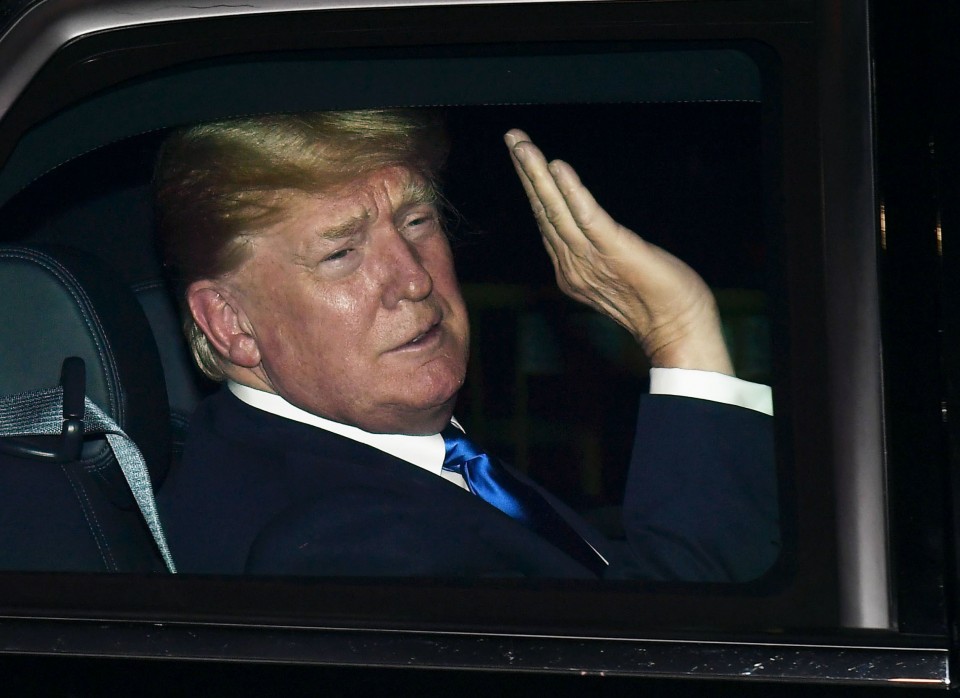 "I look forward to meeting (Kim) and have a feeling that this one-time opportunity will not be wasted!" Trump posted on Twitter while flying to Singapore.

After descending from Air Force One, the president shook hands with Balakrishnan and then got into his waiting limousine. Trump and the U.S. delegation plan to stay at the Shangri-La Hotel, another luxury hotel in the city-state.

Trump and Kim are set to discuss how to achieve "complete" denuclearization on the Korean Peninsula, which the North Korean leader agreed to pursue with South Korean President Moon Jae In at their summit on April 27.

The United States and North Korea are still at odds over how to realize the goal. Washington has sought swift denuclearization, while Pyongyang has been apparently aiming to gain concessions such as easing sanctions by vowing denuclearization in a "phased" and "synchronized" manner.

U.S. Secretary of State Mike Pompeo, however, has recently said that progress has been made in closing the gap between the United States and North Korean over the definition of denuclearization. Pompeo is slated to visit Singapore with Trump. 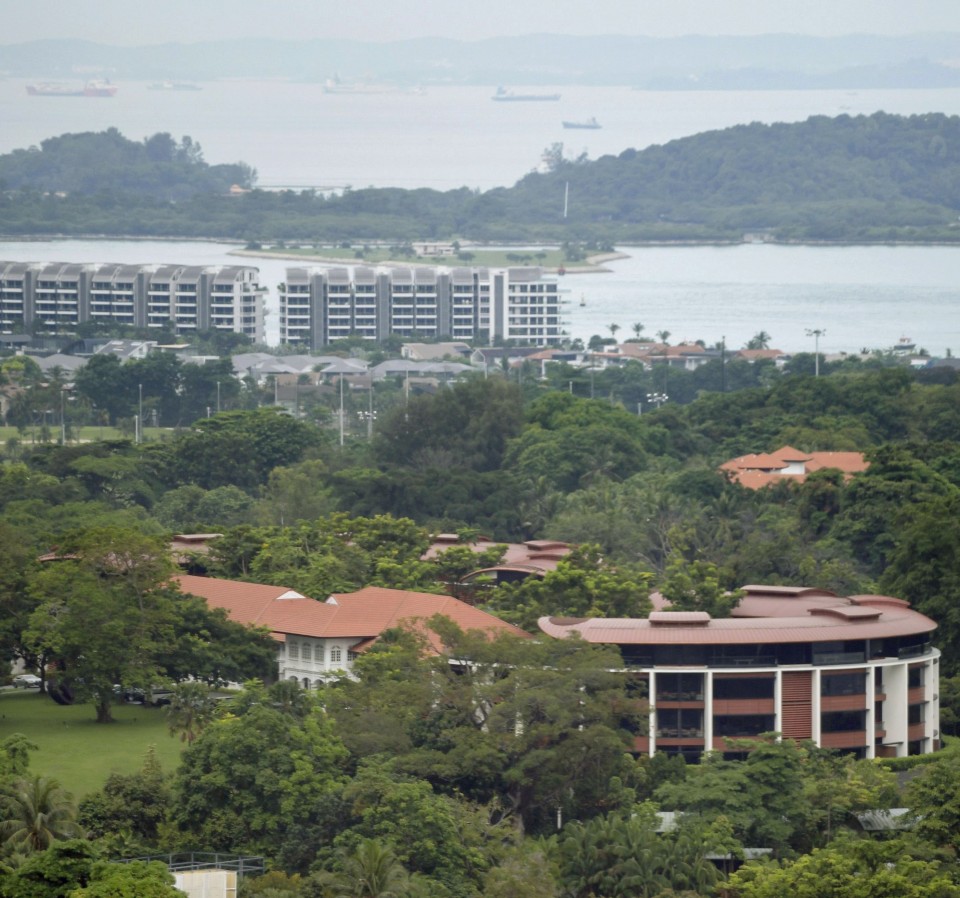 All eyes are also on whether Trump and Kim will sign an agreement to officially end the Korean War, as the two countries remain technically in a state of war due to the conflict ending in a cease-fire, but without a peace treaty.

Trump, meanwhile, reaffirmed in a meeting with Japanese Prime Minister Shinzo Abe on Thursday that he will push for resolving the issue of abduction of Japanese citizens by North Korea during his meeting with Kim.

Singapore, which has maintained diplomatic relations with North Korea for more than 40 years, has served as a broker between Pyongyang and Washington. The two nations have no diplomacy.

Trump is also scheduled to meet with Lee on Monday.