Embracing difference, Tokyo short film is a picture of inclusion

The scene: Tokyo. The plot: an Australian fan of Shakespeare with Down syndrome who sets out on a solo adventure to discover the city and escape the watchful eyes of his domineering older brother.

"Shakespeare in Tokyo" is the latest film by Australian director Genevieve Clay-Smith, a project she says aimed to open doors for the inclusion of marginalized groups in the filmmaking process.

The film casts Australian actor Gerard O'Dwyer in the lead role, alongside Japanese actors Sonny Chiba and Shioli Kutsuna, as well as participants in a workshop geared at people with Down syndrome that prepared them to be part of the film-making process. 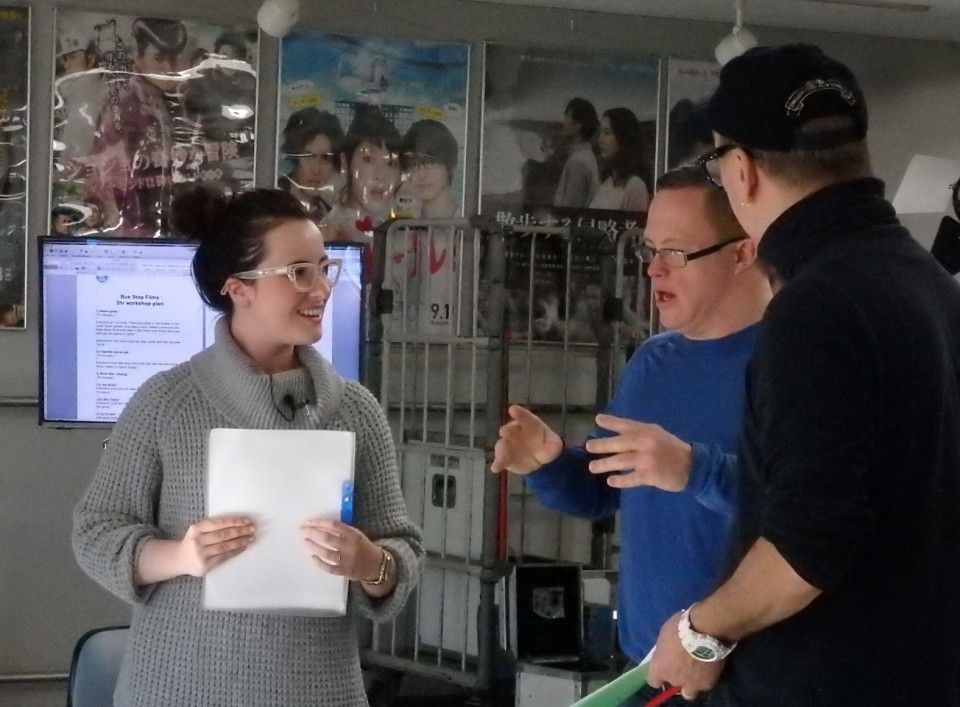 (O'Dwyer, center, speaks at a film workshop for people with Down syndrome held by Clay-Smith, left, in Tokyo on Jan. 14, 2018.)

O'Dwyer, who has Down syndrome and is from Sydney, Australia, was awarded best male actor at the Tropfest Film Festival for his role in "Be My Brother" in 2009. He was nominated for best actor at St. Kilda Film Festival for "The Interviewer" in 2013.

"When I first met (O'Dwyer), he recited the entire balcony scene from Shakespeare's 'Romeo and Juliet' and I knew that he could do it, he could be an actor," Clay-Smith recalled in a recent interview with Kyodo News in Tokyo.

"It's so easy to be inclusive. If I can do it in the film industry, we can do anywhere," she said.

Several months earlier, a group of colorfully clad people had gathered at a studio in Tokyo for the workshop in preparation for this month's Short Shorts Film Festival & Asia in Japan.

Kenta Abe, 30, was among six Japanese with Down syndrome with acting or other stage experience taking part in the workshop. Abe appeared in the film as an extra.

Clay-Smith has won over 50 international awards for her films, including the Audience Award for "The Interviewer" at the Short Shorts Film Festival & Asia in 2013.

"I enjoyed it very much," said Abe after the workshop, saying he was "nervous at first" but relaxed later and was able to look forward to the filming. 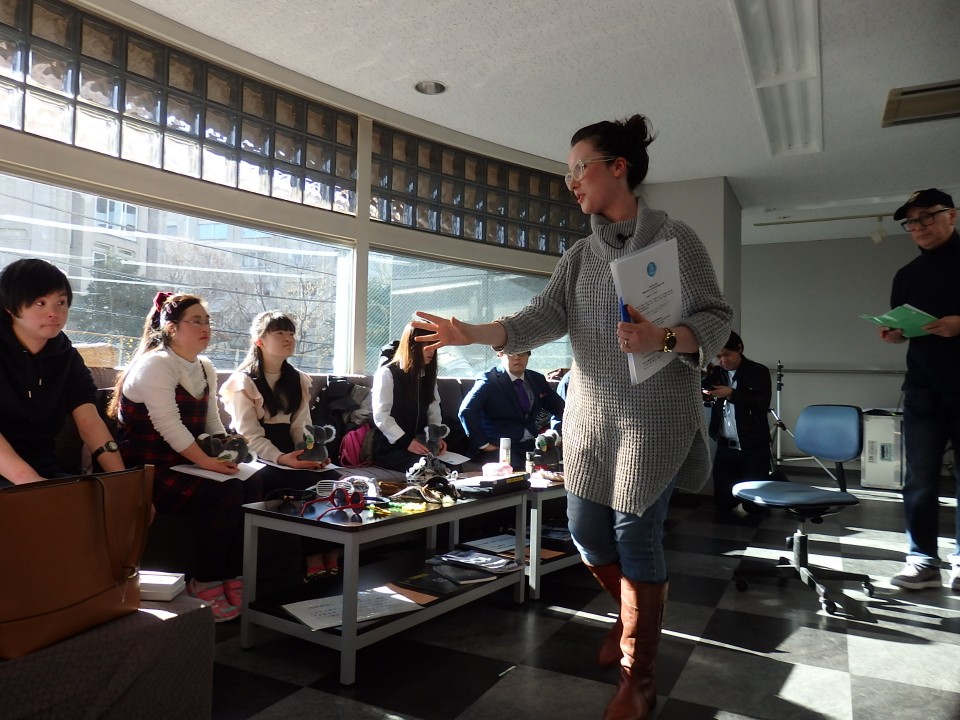 (The workshop is held to prepare for filming "Shakespeare in Tokyo" for the film festival.)

O'Dwyer came to the three-hour workshop, where Clay-Smith, an actor herself, explained about makeup, costumes and other aspects of the filmmaking process.

"Filmmaking is not just about turning on cameras," she told the participants. She explained the film's story, its lessons and issues each character faced.

The film was shot at various venues in Tokyo, including Shibuya and Hama-rikyu Gardens.

The roughly 20-minute film takes the audience through the Japanese capital as O'Dwyer, playing the part of Ben, escapes his brother to view the city on his own, encountering various people and attractions while also offering the people he meets his own perspective.

The film was created under a project sponsored by the Tokyo government for a special screening at the annual Short Shorts Film Festival and for the promotion of the city's tourism. The Tokyo film festival, celebrating its 20th anniversary this year, runs through June 24. 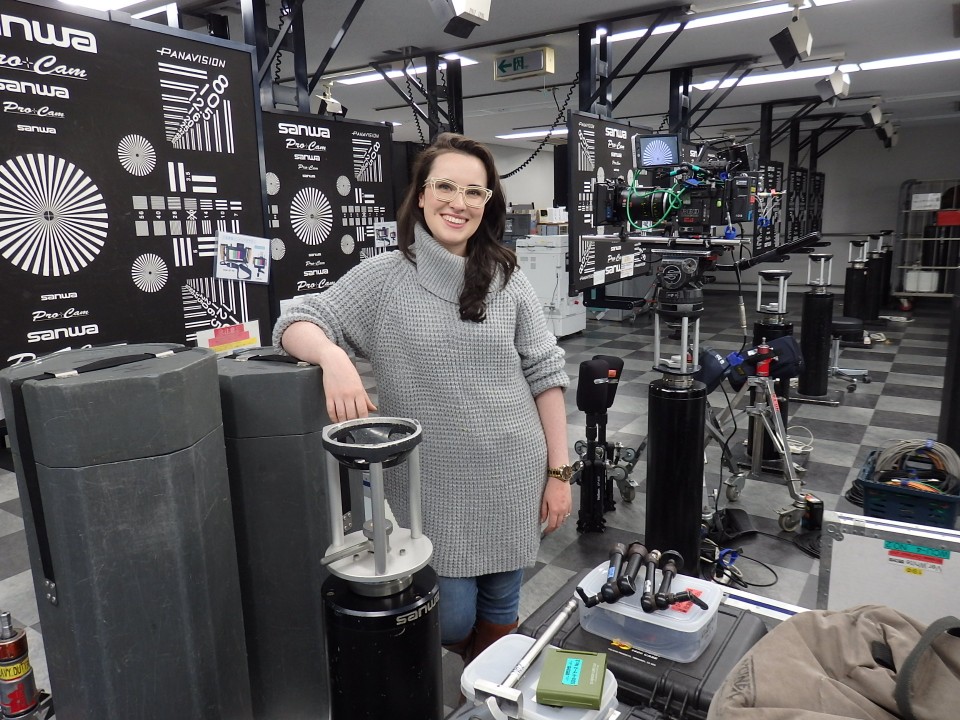 (Clay-Smith poses at a studio in Tokyo ahead of the filming.)

As the 2020 Tokyo Olympic and Paralympic Games approach, Japan has pledged to become a more "inclusive society." Some experts believe the film can help educate people about inclusiveness across a range of disabilities ahead of these major international events.

"The Paralympics tend to draw people's attention to those with physical disabilities, but the film is great in that it allowed people with intellectual disabilities to be a part," said Mayumi Mitogawa, a board member of the Japan Down Syndrome Society, who was involved in the project.

JDS is a nonprofit organization helping people with Down syndrome, also known as trisomy 21, and their families. It has around 6,000 members.

Mitogawa said the workshop made it easier for participants to get involved in filmmaking and hopes the Japanese film industry will allow other people with disabilities to have such experiences.

"Although we cannot make direct comparisons, Japan is still behind other countries (in being inclusive), so we hope the film will serve as a catalyst to bring about change," Mitogawa said, adding that introducing foreign culture to Japan through O'Dwyer's character also offers an enlightening perspective. 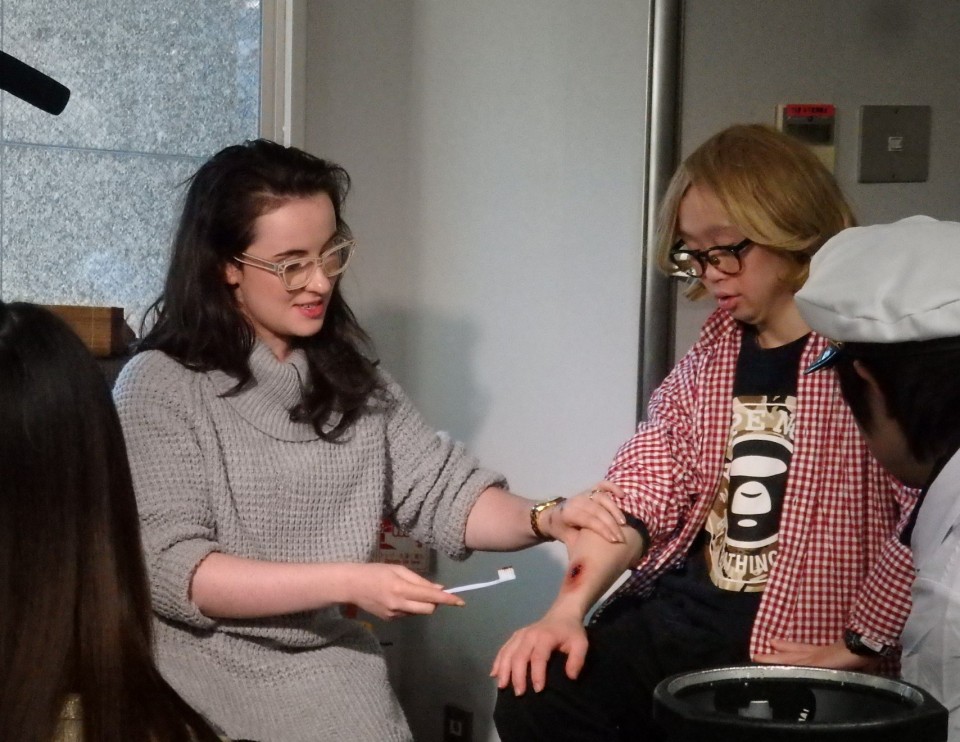 Those with disabilities have faced severe discrimination in Japan in the past, particularly under the eugenics protection law, which authorized the sterilization of people with mental disabilities and illness or hereditary disorders to prevent the birth of "inferior" offspring. It also allowed for forcible abortions.

The legislation, which drew on a similar Nazi Germany law, was scrapped in 1996 and replaced by the maternal protection law on abortions, but people who have been subjected to forcible sterilization have recently come forward to file lawsuits against the state in a sign of social change.

"A lot of people think that including people with intellectual disability in the workforce would slow them down or compromise quality and be too hard, but...(this is) not true," said Clay-Smith, who has held hundreds of workshops geared to those with Down syndrome since her first film on the genetic disorder 10 years ago.

Sharing her experience working with O'Dwyer over the years, Clay-Smith called for embracing people for who they are and believing in them. This, she argues, is the enabling force.

"When you are faced with a difference, no matter what the difference is, if they are not the same as you, people immediately lower expectations, and that is a disabling force in itself," she said.