Hosting the Olympic and Paralympic Games comes with a massive environmental footprint.

In fact, the Tokyo 2020 Organizing Committee believes that making the Games sustainable can only be achieved if it intensifies its efforts to showcase green technology innovations in a world where climate change is the prevailing reality.

"The climate change problem, that is to say cutting carbon emissions, is a top priority worldwide," Yuki Arata, senior director of sustainability for Tokyo 2020, said in a recent interview with Kyodo News.

"The Paris Agreement starts in 2020 and the goal set forth is towards zero carbon. But as long as people live in a modern society, it is impossible to have absolutely no emissions of greenhouse gases. What's important is being able to ascertain the GHGs we ourselves are emitting, and finding ways to avoid or reduce them," she said. 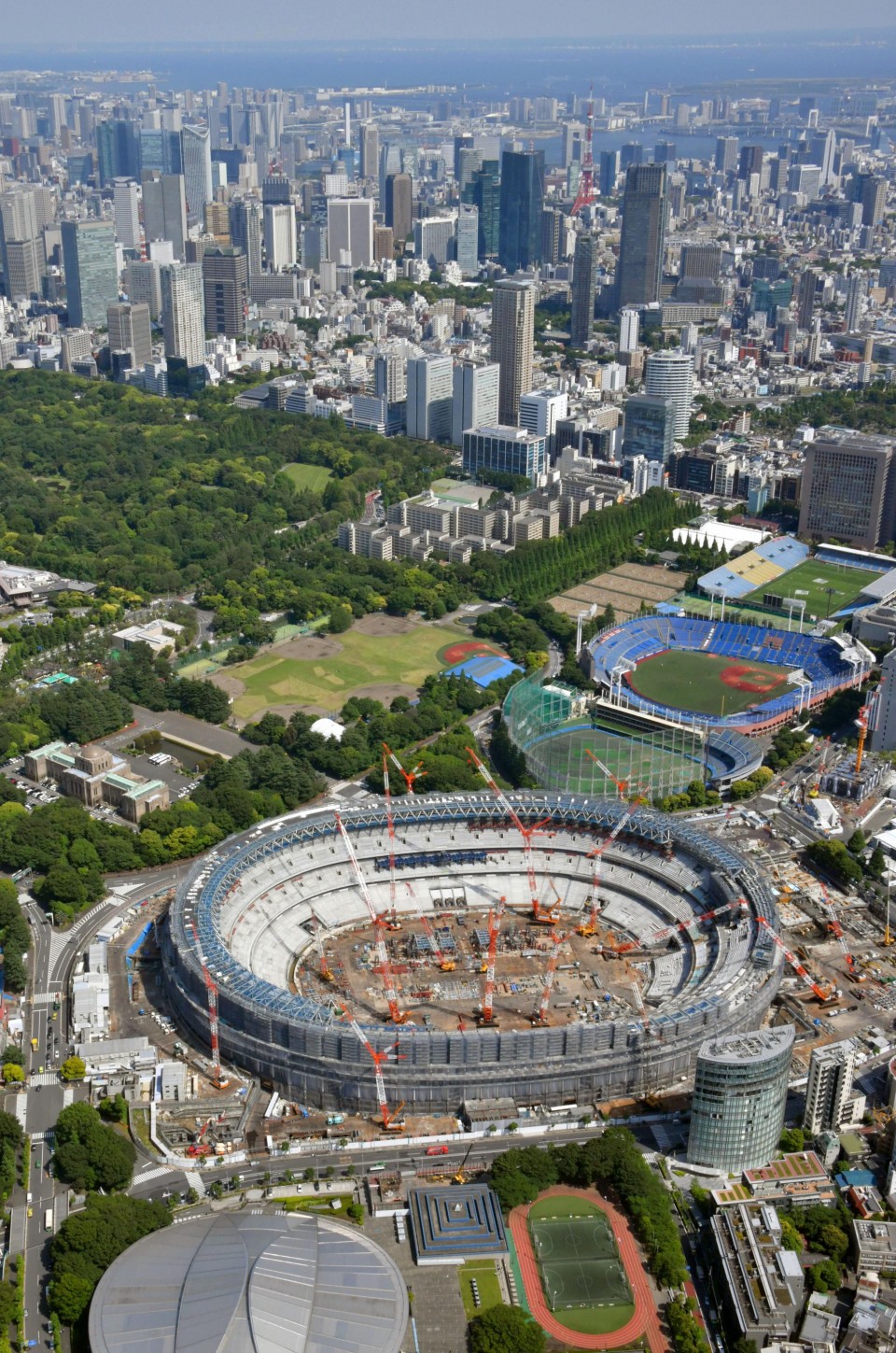 (Japan's new National Stadium under constrution, the main venue for the Olympics)

The Tokyo Organizing Committee of the Olympic and Paralympic Games released a sustainability operation plan on June 11, announcing its intention to work "Towards Zero Carbon" during the preparations for the Games and when they take place.

Its ambitious plan, which seeks to contribute to the United Nations' 17 sustainable development goals (SDGs) addressing such issues as climate change, and sustainable consumption and production, calls for the maximum use of renewable energy sources during the Games.

Tokyo 2020 intends to have all electricity used at competition venues and the athletes' village generated by renewables.

The Tokyo metropolitan government will cooperate with Tokyo 2020 so that the credits of the Tokyo cap-and-trade program can be used to offset Games-related GHGs.

Flying in thousands of athletes, staff and officials not to mention millions of spectators to and from the Games leaves a huge carbon footprint.

"The Olympics and Paralympics are mega sports events, and the carbon emissions related to having thousands of athletes and millions of spectators participate aren't negligible. But with the focus being on Japan, we see this as an important opportunity to showcase how to reduce greenhouse gases," Arata said.

Under the slogan "Be better, together," she said that Tokyo 2020 has laid out five main themes -- climate change, resource management, biodiversity, human rights, and communication and engagement -- so as to "reduce adverse impact and maximize positive impact for the planet and the people."

Tokyo 2020 also plans to use carbon offsets to significantly compensate for its GHG emissions.

"We plan to implement energy-saving measures and CO2 reduction methods in the preparation stage and during the Games and utilize renewable energy for further reductions," Arata said, adding that having nearly 60 percent of competition venues use existing facilities would produce a reduction of about 80,000 metric tons of carbon emissions.

Toward its goal of "zero wasting," included under the theme of resource management, Tokyo 2020 aims to achieve 99 percent reuse or recycling across all procured items and goods in the delivery of the Games to minimize resource waste and degradation of ecosystems.

For example, approximately 5,000 medals to be awarded at the Games will be forged from recycled precious metals recovered from used smartphones, digital cameras, computers and other small electronic devices handed in by consumers for that purpose in a program that has already begun.

While Olympic medals have been made from recycled metals previously, this is the first time a country's citizens have been involved in the endeavor.

"Getting citizens involved in the project to become aware of the problems of resource circulation has the effect of leading them to take action," Arata said.

According to Tokyo 2020, as of March 2018, more than 70 percent, or 1,404, of municipalities had taken part in the nationwide medals project, recovering about 14,636 metric tons of metals from electronic devices. NTT Docomo shops had collected about 3.3 million used mobile phones, smartphones and tablets.

Tokyo 2020 plans to cut down on food waste through the use of information and communications technology and introducing portion controls.

"For example, we can find out how many dinners are needed in the athletes' village through our ICT technology. We will work to reduce the amount of containers and packaging in cooperation with sponsors, licensees, suppliers and shops at venues," Arata said.

Elsewhere, Tokyo 2020 sees the Games as a testing ground for Japan's long-term goal of realizing a "hydrogen society." Although Tesla founder Elon Musk may have dismissed hydrogen fuel cells as inefficient and expensive, companies like Toyota Motor Corp. and other leading Japanese manufacturers are betting on hydrogen as the wave of the future for sustainable and clean technology.

"Hydrogen can be applied not only for electric power and transportation but also various industrial processes, including heating," says Arata. "It also offers a great opportunity for us to showcase how we can transport athletes and officials using fuel cell vehicles."

Rather than concerns over the costs of hydrogen as a prospective energy, Arata said Tokyo 2020's aim is to get people thinking about "decarbonization." "Of course, the cost will come down as more people start using it. So rather than costs we have to look at how we solve the problems facing us now."

The International Olympic Committee's Olympic Agenda 2020 urges Tokyo 2020 to host the first "SDGs Olympics" from the planning stage. The IOC has stated its commitment to reduce the environmental and economic burden on potential host cities arising from the large construction projects required to host the Games.

The Tokyo 2020 Games will use 43 venues, including 25 existing, 10 temporary and eight new permanent venues -- most of which are in two central zones of the capital.

According to Tokyo 2020, the new Olympic Stadium and other permanent venues are slated to become community facilities that will enhance the quality of urban life after the Games -- creating a sustainable legacy for future generations.

Although technology enables host cities to reduce the carbon footprint, it goes without saying that "any new construction will have a footprint," economics professor Andrew Zimbalist of Smith College in Northampton, Massachusetts, who has written extensively about the risks of hosting the Olympics, said in an email.

Zimbalist, author of "Rio 2016: Olympic Myths, Hard Realities," suggests having the Games hosted by just one or two cities that already have the infrastructure and venues in order to reduce greenhouse emissions. He recommends the International Olympic Committee change its own structure to promote sustainability.

"Sustainability is a nice-sounding word, but the IOC must change its structure to truly address the problem. For instance, having its 100-odd voting members who have no technical background in environmental science make the decision on hosting is a poor way to demonstrate true commitment to sustainability," Zimbalist said.