Protest held in Okinawa against landfill for U.S. base transfer

Okinawa residents held a protest demonstration at sea Monday against scheduled land reclamation work for the relocation of a U.S. military base within Japan's southernmost island prefecture.

While the full-fledged landfill work for moving U.S. Marine Corps Air Station Futenma is expected to start as early as Aug. 17, many residents are against the plan as they want the base moved out of the prefecture.

Some 70 canoes and several small vessels were used by the protesters as they faced off patrol vessels of the Japan Coast Guard off the Henoko coastal area of Nago, where the base is scheduled to be relocated from densely populated Ginowan.

More than half of the canoes entered the off-limits construction work area and were subsequently evicted. Protesters held placards carrying messages such as "Don't construct a base," and "Don't dump gravel."

"I don't want them to reclaim this beautiful sea," said a man in his 40s from the village of Ogimi who was among the protesters.

A protest gathering of hundreds of people was also scheduled to take place on land in the afternoon, but it was canceled due to poor weather.

Since the state government began constructing seawalls in April last year, protesters have clashed with security forces a number of times around the U.S. Marine Corps' Camp Schwab, located next to the relocation site.

Okinawa Gov. Takeshi Onaga has said he will retract the approval given to the state's landfill plan by his predecessor, a move that is certain to reignite the legal battle between the state and the local government over the project.

The two sides have already fought in courts a number of times. In March, the Okinawa prefectural government lost a suit it had filed against the state to stop the construction work as the Naha District Court rejected the suit, saying local governments cannot bring a suit seeking others to comply with ordinances or rules.

Onaga, who was elected on an antibase platform, recently underwent pancreatic cancer surgery and has not said whether he will run in the November gubernatorial election. 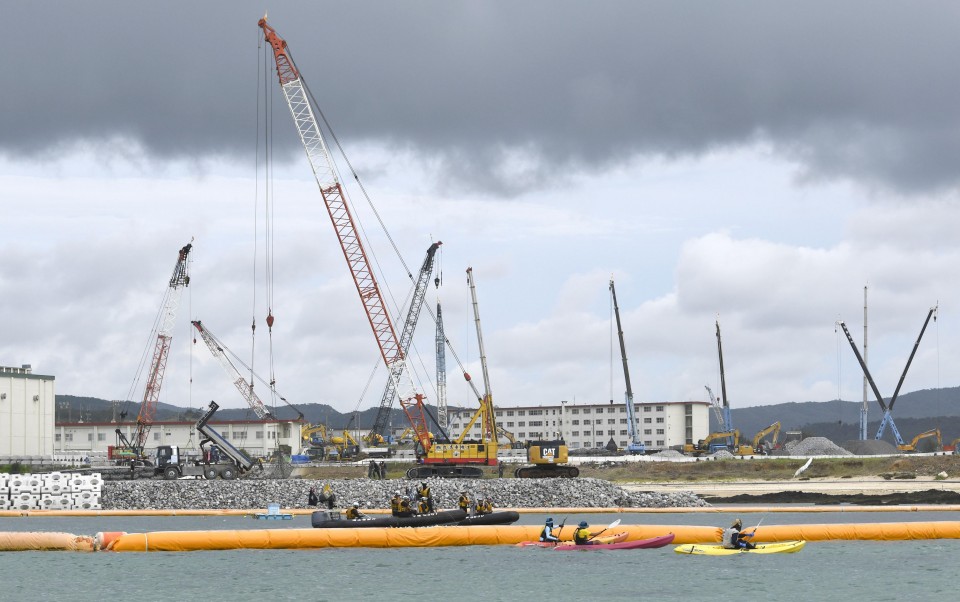 The state government initially planned to begin land reclamation work from July, but the decision to protect an endangered species of coral inhabiting the area has delayed the start.

Okinawa hosts the bulk of U.S. military facilities in Japan, a situation that many local residents say puts an unfair burden on the prefecture.

The state maintains that the relocation of the Futenma base to the Henoko area is the only solution for removing the dangers it poses without undermining the perceived deterrence provided by American troops under the Japan-U.S. alliance.