OPINION: Be a player to abolish nuclear weapons

All people of East Asia and beyond need to join the nuclear disarmament game. You must not remain a passive audience to the crucial talks between two men with nuclear buttons.

If the Singapore Summit fails, we all face the real threat of a nuclear war over the Korean Peninsula. The consequences would be catastrophic, with no winners. Your lives are being threatened, taken hostage. We must all work for our own survival.

This first-ever U.S.-North Korea Summit must become a genuine negotiation toward the abolition of nuclear weapons. That is why the International Campaign to Abolish Nuclear Weapons (ICAN) has prepared a set of recommendations toward the summit.

The U.N. Treaty on the Prohibition of Nuclear Weapons (TPNW), which was adopted by 122 states last July, provides the way ahead. The treaty comprehensively prohibits all activities related to nuclear weapons, from developing, possessing, deploying and using them, as well as assisting these acts in any way.

It also provides clear pathways for nuclear-armed states that decide to part with their weapons to dismantle their nuclear arsenal under strict international monitoring. The U.S. government is talking about "comprehensive, verifiable and irreversible disarmament." This is just what the TPNW provides for. Why not use it?

Our proposal contains five steps, what we call the "5Rs."

First, Recognize the unacceptable humanitarian consequences of nuclear weapons. Leaders of states must listen to the survivors of Hiroshima and Nagasaki, including the tens of thousands of Korean Hibakusha.

Third, Remove nuclear weapons with a verifiable and irreversible plan. As part of this effort, ways to mitigate environmental and health impacts of nuclear detonations in North Korea should also be investigated.

Fourth, Ratify the Comprehensive Nuclear-test Ban Treaty (CTBT). We are calling on both the United States and North Korea to do so.

Fifth, Rejoin the Nuclear Non-Proliferation Treaty (NPT) and the international community. This means not only that North Korea gains development in exchange for nuclear disarmament, but also that the United States must implement its disarmament obligations. 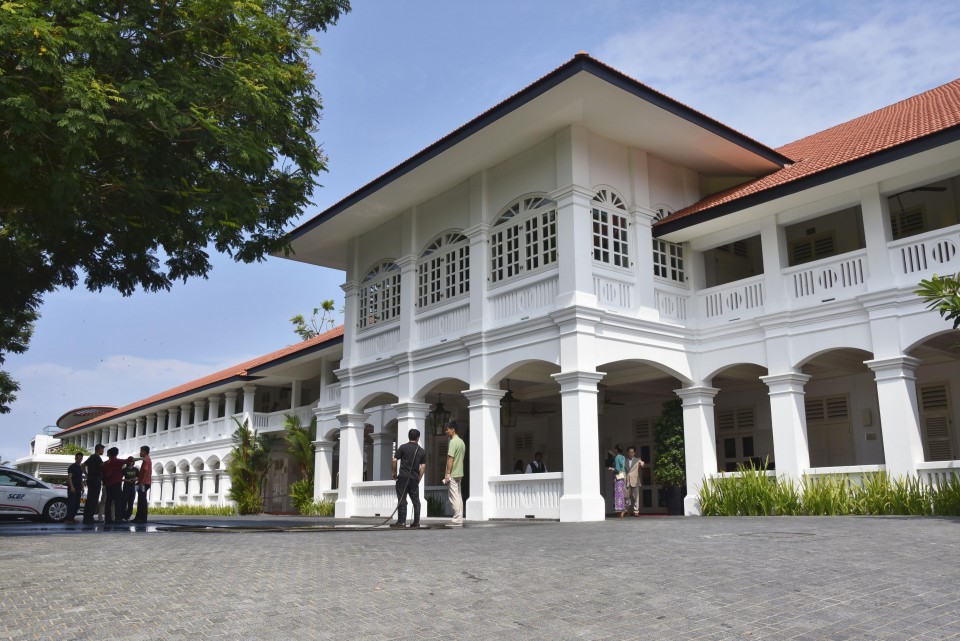 (The Capella Singapore, the venue of Trump-Kim summit talks)

This proposal is not limited to the two states now under the spotlight. South Korea and Japan must also take active steps. They should leave the illusion of the nuclear "umbrella" and join the TPNW.

By doing so, they would make legally-binding commitments not to deploy nuclear weapons on their soil, nor to assist any nuclear use by the United States toward North Korea. This would remove the nuclear threats long perceived by the isolated North Korea.

Likewise, North Korea's joining the TPNW would remove nuclear threats to South Korea, Japan and the world. These steps would change the security paradigm of East Asia. China and Russia should also participate in nuclear disarmament talks for the region.

President Moon Jae In of South Korea has proven to be one of the bravest leaders, not waiting but instead pro-actively working for change. We now encourage him to go a step further, by declaring that South Korea will join the TPNW.

Unfortunately, we have not seen any equivalent leadership from Prime Minister Shinzo Abe of Japan. But surely, people of the country that experienced the inhumane devastation of nuclear weapons will not wait, but will act, and demand that their own government too rejects nuclear deterrence and joins the TPNW.

Ending the Korean War would remove the root causes of nuclear weapons on the peninsula. A peace treaty would therefore create firm conditions for nuclear disarmament.

Conversely, nuclear disarmament creates conditions for peace. Too often, the lack of peace and trust has been used as an excuse to refuse nuclear disarmament. This is a recipe for an arms race, for nuclear proliferation, and ultimately for catastrophe.

The United States and Japan have publicly been seeking a "credible nuclear deterrence" for their national security. This assertion just mirrors the appeals of North Korea. It is time for us to take firm actions to end this vicious cycle.

We at ICAN have been mocked as idealists, as dreamers. However, together with likeminded governments, we made the nuclear ban a reality.

Skeptics went on to say that the treaty does not actually eliminate nuclear weapons. Yet now, talks for the disarmament of a nuclear-armed state are actually taking place.

Whether this opens the door for a new era free of nuclear weapons for East Asia and beyond depends on your action.