An exhibition by leading Japanese photographer Mika Ninagawa showing 15 women who work as geiko -- the word typically used in Kyoto for geisha -- recently graced the Museum Eki Kyoto at JR Kyoto Station.
Ninagawa, known for her use of brilliant and vivid colors, spent about two years working toward the April 14-May 13 exhibition titled "Utage". During this time she visited Kyoto and created special settings for a selected group of geiko women and their apprentices, called maiko, from the five major "kagai"  entertainment districts in the city.
Ninagawa also photographed scenic views in the western Japan city in each season, taking the number of her pieces displayed in the exhibition to around 80.
The following is an excerpt of a recent interview with Ninagawa.
-- What inspired the "Utage" exhibition?
In 2016, I took shots of a few geiko and maiko women for an exhibition in Malaysia that was aimed at raising public awareness of Kyoto as well as overall Japan. The experience made me feel I want to take more photos of female performers in the Kyoto entertainment industry. I made this event happen thanks to various connections. I paid many visits to Kyoto over the two years.
-- You took a number of photos of geiko and maiko. What do you think is the appeal of the performers?
Geiko and maiko are so mysterious that it makes me feel that although they do exist there, they look unreal. With the performers I also see a culture that has been developed for a long time and the sheer beauty and toughness of the women who are determined to preserve it.
Of course, sometimes I saw them relax and behave like next-door girls. But once they posed before camera, they took on an aura of drawing power, which was totally different from what I had felt through my previous works with a number of actresses and artists.
-- Did you find the culture of kagai your kind of thing?
Kagai is a breathtaking world where a girl's heartbeat easily quickens. Even a look at "kanzashi" floral hairpins could make that happen. I created different settings for each geiko and maiko for photo shoots, using the inspiration I gained from factors such as their names. I think I could successfully synchronize the quality of the artificial world and that of the dreamy world.
-- You also photographed scenes in Kyoto in all seasons.
Most photographers may find it difficult to work in Kyoto and Paris as the cities are in a high level of completion. I have visited Kyoto often since I was young but I felt I was not skillful enough to shoot the city and "I may lose out on Kyoto." This time, however, I was able to face Kyoto straightforward and release the set of photos of the city as well as geiko and maiko.
-- How did you like it?
During the photo shoot I only tried my best. But I feel very good to see my photos compiled in a book showing the women's characters more vividly and making them appear more powerful than the reality. 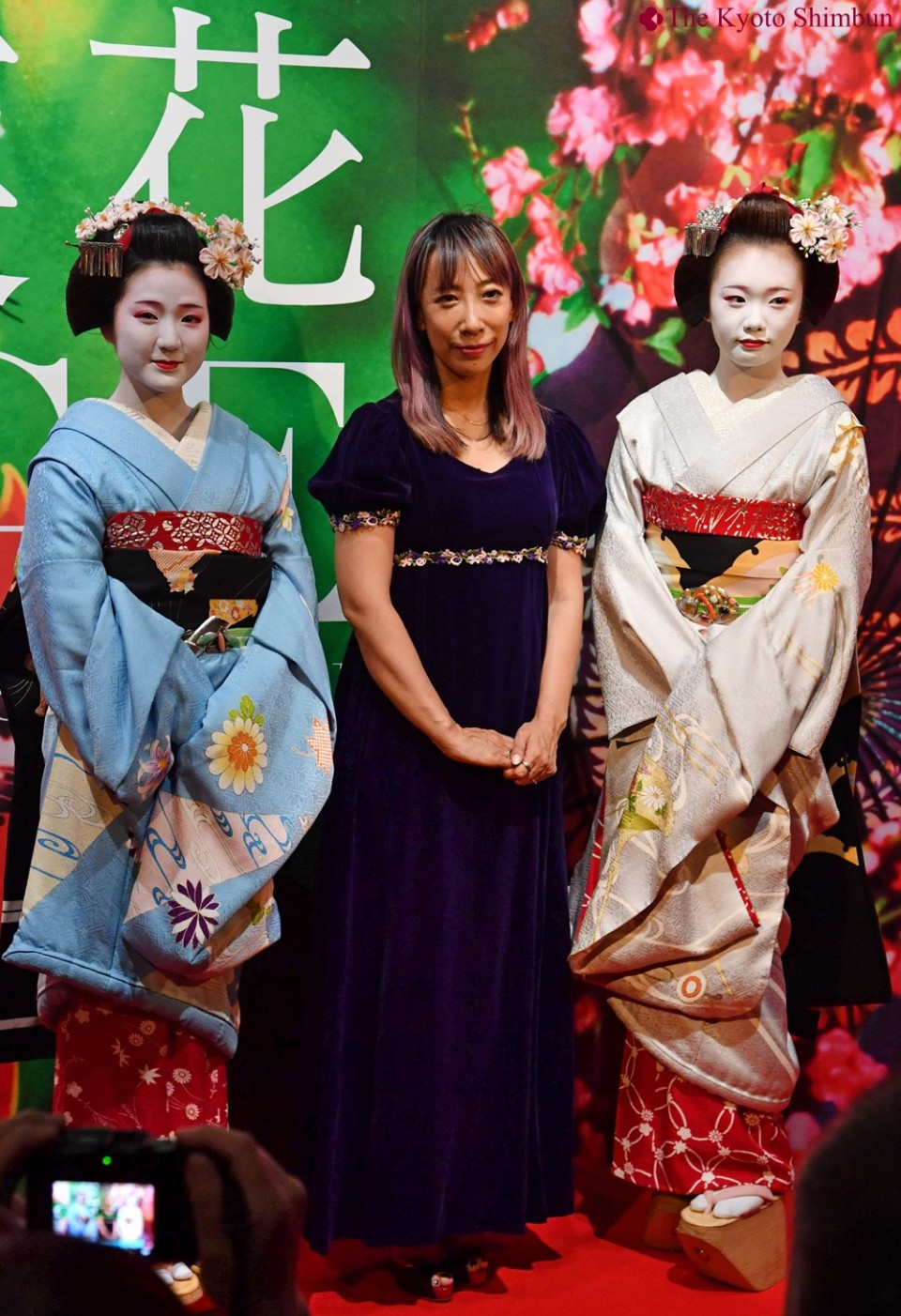 Mika Ninagawa (C)
Shigeo Goto, producer of the exhibition, said, "Women's viewpoints are important today. I hope the event would encourage any change to the men-oriented set of values."
The professor at Kyoto University of Art and Design regards Ninagawa, who has represented "girls' culture" since she debuted in the 1990s, as an artist who is "not only consumed but fosters the new culture."
Goto said the exhibition was something like "a chemical reaction" after Ninagawa interpreted the traditional kagai world with the viewpoint of a contemporary woman.
"Ms. Ninagawa can even communicate with geiko and maiko via her photos," Goto said.
"Kagai is a dreamy world. Photography exists between fiction and reality."
The aim of the Utage exhibition was to express what the models and the photographer felt to each other, according to Goto.
He hopes men and women will discuss what they feel after seeing the exhibits together.
The Kyoto Shimbun
More from The Kyoto Shimbun:
Old but new, a Kyoto designer is redefining kimono tradition
Prayer for peace: Japan's "Kids' Guernica" murals headed to Paris
Kyoto makeup artist nominated for Oscar