At a press conference after their summit talks in the Kremlin in Moscow, Putin said, "What is important is to seek a solution (to the peace treaty issue) that meets national interests of both sides and is mutually acceptable."

Abe said he and Putin confirmed the two countries will work closely together toward North Korea's denuclearization, adding, "This is the stance shared by Japan and Russia."

Abe and Putin met amid uncertainty over whether U.S. President Donald Trump and North Korean leader Kim Jong Un will hold a summit and after South Korean President Moon Jae In and Kim met earlier in the day for the second time in a month.

In their 21st face-to-face meeting, Abe and Putin discussed how to foster joint economic activities in five areas on disputed islands controlled by Moscow and claimed by Japan, as agreed to last September.

The two leaders agreed to accelerate consultations to create business in the areas and dispatch business missions to the islands in the summer.

Japan hopes the activities will pave the way to settling a decades-long territorial row over the islands, and ultimately to signing a post-World War II peace treaty. For its part, Russia aims to attract Japanese investment in the underdeveloped Far East region.

Abe is banking on Putin, who secured another six-year term in a presidential election in March, to make a landmark decision over the contested isles off Japan's northernmost main island of Hokkaido.

In a joint interview with Kyodo News and other news agencies Friday in St. Petersburg, Putin said a peace treaty is possible if bilateral relations deepen through planned joint economic activities. 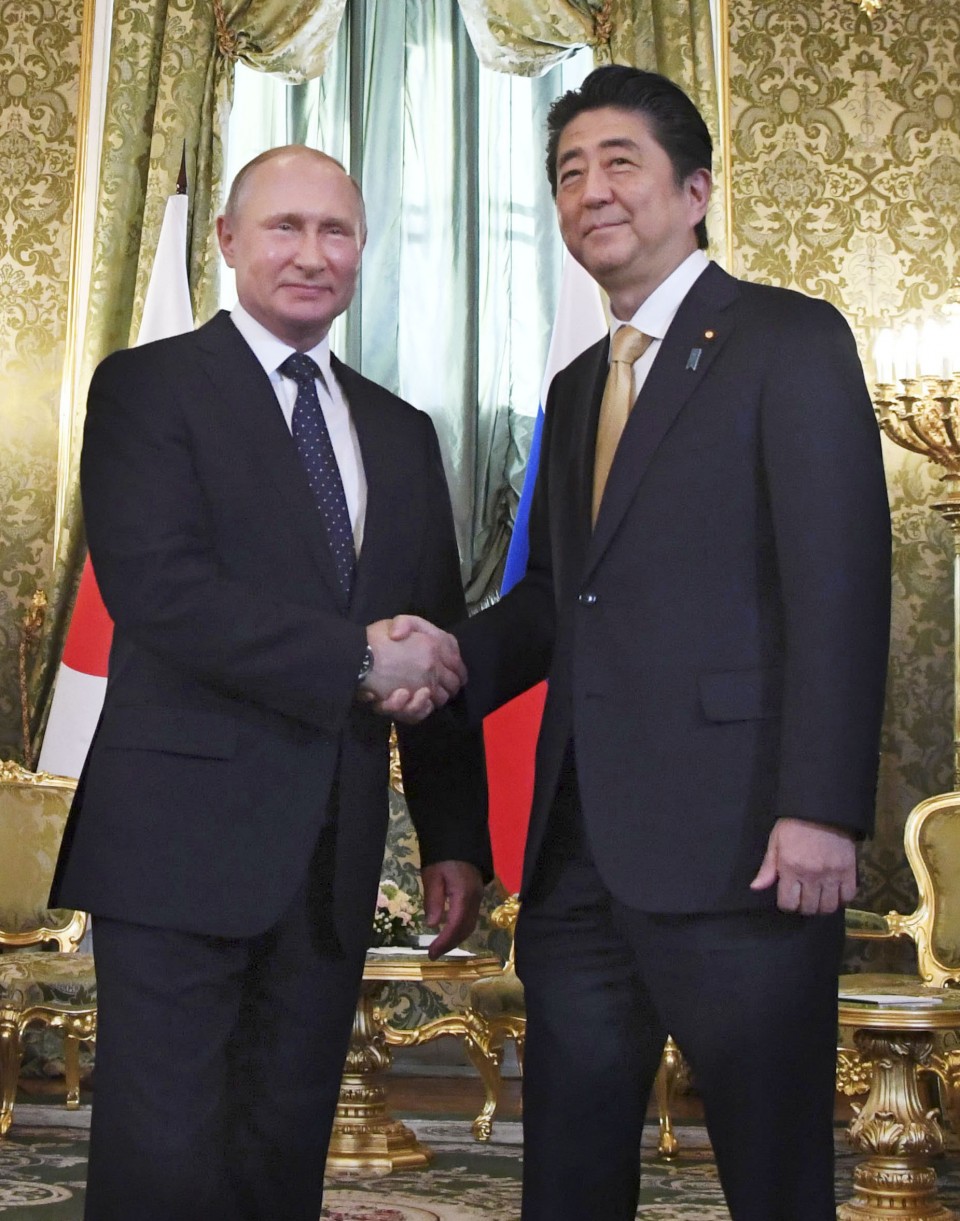 But when it comes to the disputed islands, it is still unclear whether the two countries will be able to come up with a "special framework" that does not compromise either side's legal position on the islands' sovereignty.

The islands of Etorofu, Kunashiri, Shikotan and the Habomai islet group, called the Northern Territories in Japan and the Southern Kurils in Russia, were seized by the former Soviet Union at the end of the war.

As part of humanitarian measures, Abe and Putin agreed to allow former Japanese residents of the islands to travel by aircraft to the islands this year to visit relatives' graves, as was allowed last year for the first time.

Abe and Putin also confirmed how far the eight-point economic cooperation package, which Abe proposed two years ago, has advanced.

On North Korea, Abe underlined that Tokyo and Moscow will closely cooperate so that Pyongyang will "head in the right direction."

Putin, meanwhile, said the North Korean issue should be addressed "in a political and diplomatic manner," as opposed to Japan's stance to maintain, along with the United States, "maximum pressure" on the country.

Abe said he believes Putin understood Japan's stance to comprehensively settle the issues of North Korea's nuclear weapons, ballistic missiles and Japanese nationals abducted by the North in the 1970s and 1980s.

Japan has been performing a delicate balancing act in pursuing improved relations with Moscow amid deteriorating ties between Russia and Western countries, particularly the United States, Japan's major ally.

Deputy Chief Cabinet Secretary Kotaro Nogami, who briefed reporters, said Abe and Putin confirmed they will provide support for the success of what would be the first-ever U.S.-North Korean summit. Trump, having once cancelled the talks, has now indicated they could take place as initially planned on June 12 in Singapore.

In an attempt to boost security cooperation, the two leaders agreed on the next round of so-called two-plus-two talks involving the two countries' foreign and defense ministers later this year following a session in March 2017 in Tokyo.

Abe and Putin did not take questions from reporters despite an initial arrangement to do so during the press conference after the summit, which started around 40 minutes behind schedule.