With 99.66 percent of votes counted by the National Election Commission, the Alliance for Change and Progress, or AMP, a coalition of Gusmao's National Congress for Timorese Reconstruction, or CNRT, and two smaller parties, captured 49.41 percent.

The Revolutionary Front for an Independent East Timor, better known as Fretilin, won 34.37 percent of the vote.

In a 65-seat parliament, AMP will secure 34 seats while Fretilin will fill 23 seats. The rest will go to smaller parties and coalitions.

It was East Timor's second general election in less than a year.

Fretilin won the July 2017 election by a narrow margin, forcing it to join with the smaller Democratic Party to form a government headed by the larger party's secretary general, Mari Alkatiri.

With only 30 seats in the parliament, Alkatiri's minority government twice failed to pass a budget, prompting President Francisco Guterres to dissolve parliament in January and call a new election. 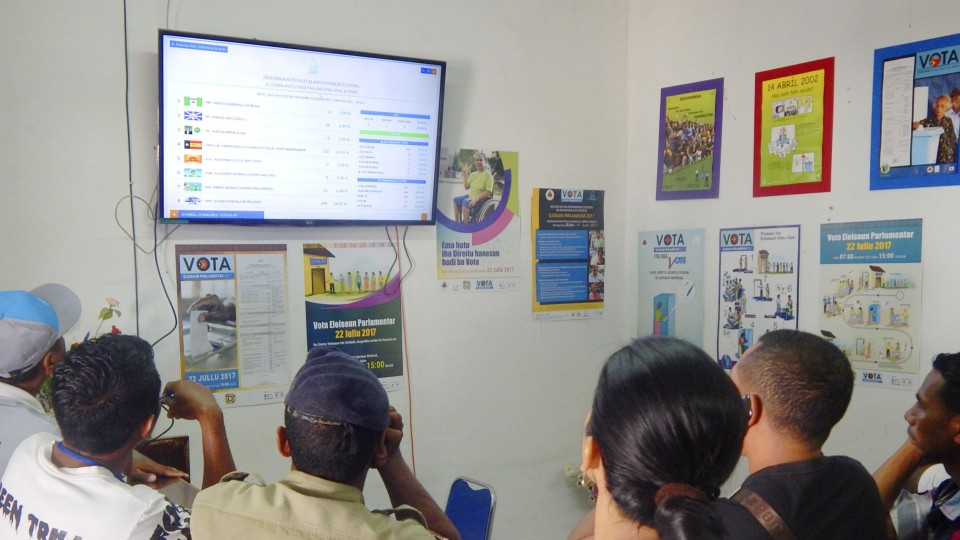 (Citizens in Dili tune into the East Timorean general election. )

The decision of Guterres, who is also Fretilin president, came after months of political gridlock between the government and the CNRT-led opposition.

A CNRT member and former Cabinet minister said on condition of anonymity that Gusmao, who turns 74 next month, is set to become prime minister for a third time since East Timor gained full independence in 2002.

He added that the deputy prime minister position will be taken by former President Taur Matan Ruak, who now heads the People's Liberation Party, one of the coalition parties in the AMP.

Both men were high-profile commanders of guerrilla forces during the armed struggle for liberation from over two decades of Indonesian occupation that ended in 1999.

"After being defeated in this election and becoming an opposition in Parliament, Fretilin may take a revenge against the CNRT-led government," he said, such as by having its lawmakers block its attempts to pass a budget and various programs in the body, or by having Guterres exercise his presidential veto power.

"As long as the same politicians remain in East Timor politics, we can't expect much change," he said.

Jesuino Marcal, who works with a local online media outlet in the capital Dili, said he believes the election result will bring a good future to all East Timorese.

"Today's main political actors remain the same old leaders. They only exchange positions. This shows that they are still trusted by many people to lead this young country," Marcal said.