Hundreds of protesters marched Tuesday in Bangkok on the fourth anniversary of the junta's 2014 coup, demanding that it hold a general election this year.

Led by the Democracy Restoration Group, the protesters, who stayed overnight at Thammasat University, began their 3-kilometer march to Government House, where Prime Minister Prayut Chan-o-cha's office is located, in the morning.

Some of them managed to get close to the compound but were blocked by barriers and police officers, and forced to disperse.

Five protest leaders who tried to submit a letter of demands to the government were arrested there by the police, while three other leaders surrendered themselves later in the day.

The protesters demanded that the National Council for Peace and Order, as the junta is formally known, return democracy to the people through an election, while they criticized it for delaying the election from November this year to early next year.

A Cabinet meeting on Tuesday was held as usual despite the rally going on at the same time Prayut told a press conference afterward that the schedule of holding the election remains unchanged. 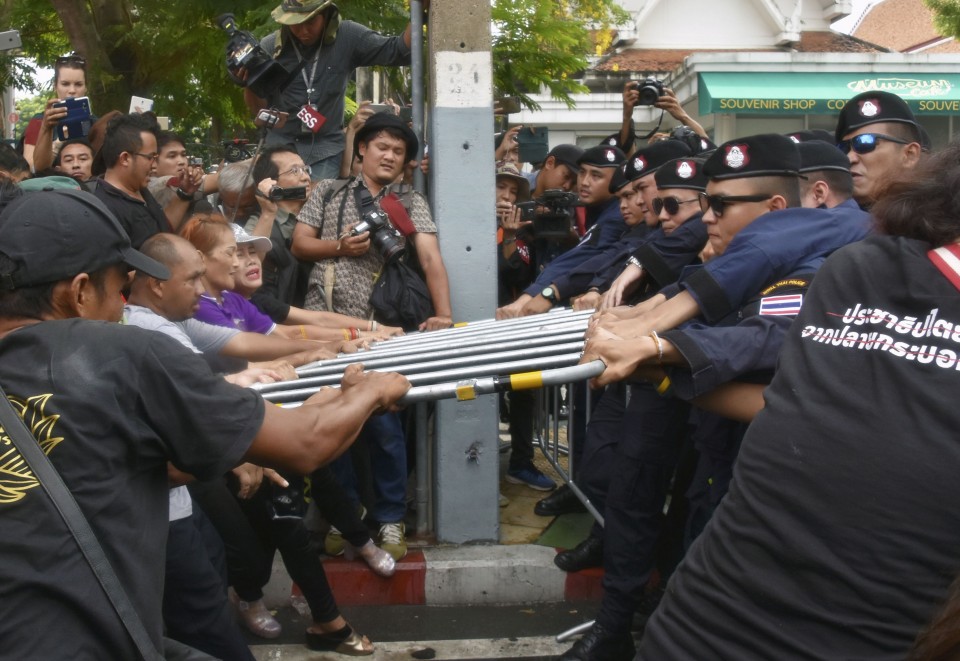 (Protesters attempt to remove a fence placed by police)

Ahead of the march, the police declared a radius of 50 meters around Government House to be a controlled area. They deployed around 1,800 officers at government headquarters and another 1,200 at the university.

The tight security comes after the police said they had received intelligence that hardliners supportive of former Prime Minister Thaksin Shinawatra, ousted in a previous military coup in 2006, could resort to violence.

In three incarnations, their political party has won every election since 2001.

Deputy Prime Minister Prawit Wongsuwon earlier told reporters protesters would not be allowed to stage a rally and only two to three representatives could submit the letter.

He said Tuesday's gathering violated an NCPO order that prohibits assembly of five or more people.