As many questions remain unanswered in connection with a suspected chemical weapons attack in Syria, a gas cylinder found on top of a building has sparked controversy.

A lack of hard evidence has led discussions to go back and forth over the main issue -- whether President Bashar al-Assad's regime used it as a barrel bomb containing chemical agent to kill civilians or cornered opposition fighters staged the attack in a bid to draw anti-Assad action.

Hope that the truth will come out has been quickly diminishing as an investigation by the Organization for the Prohibition of Chemical Weapons has been blocked by the Assad regime.

"This is where the chemical bomb landed. Look," Nasr Hanan, 20, said, pointing to a yellow cylinder --  some one meter in length and some 30 centimeters in diameter -- on the roof of his apartment building in a Damascus suburb during a media tour organized by Syrian authorities. 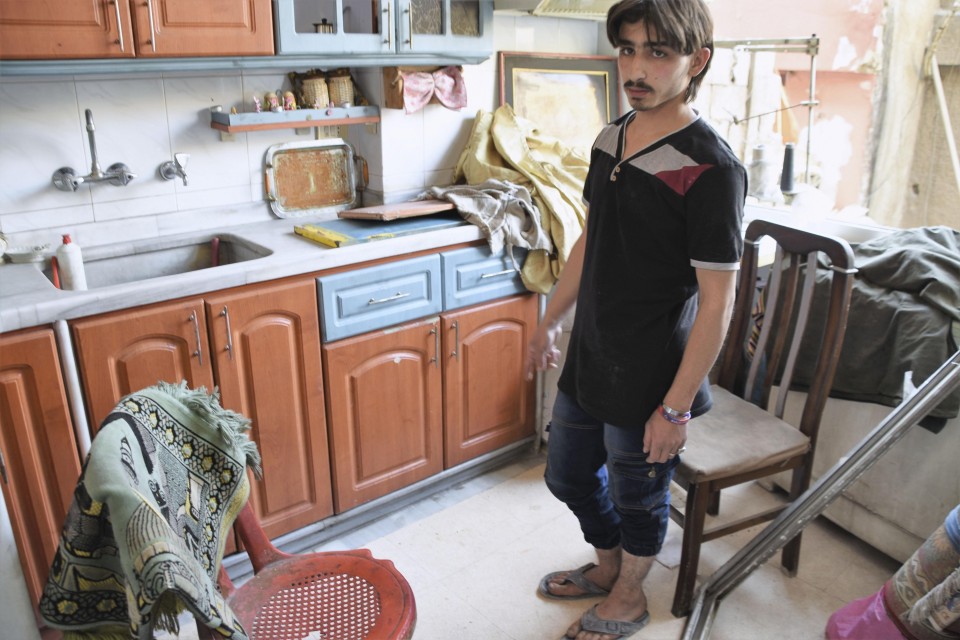 A bomb or two fell on the building in Douma on the night of April 7 but no one heard an explosion, residents in the area told Kyodo News. The participants on the tour were accompanied by information ministry officials. 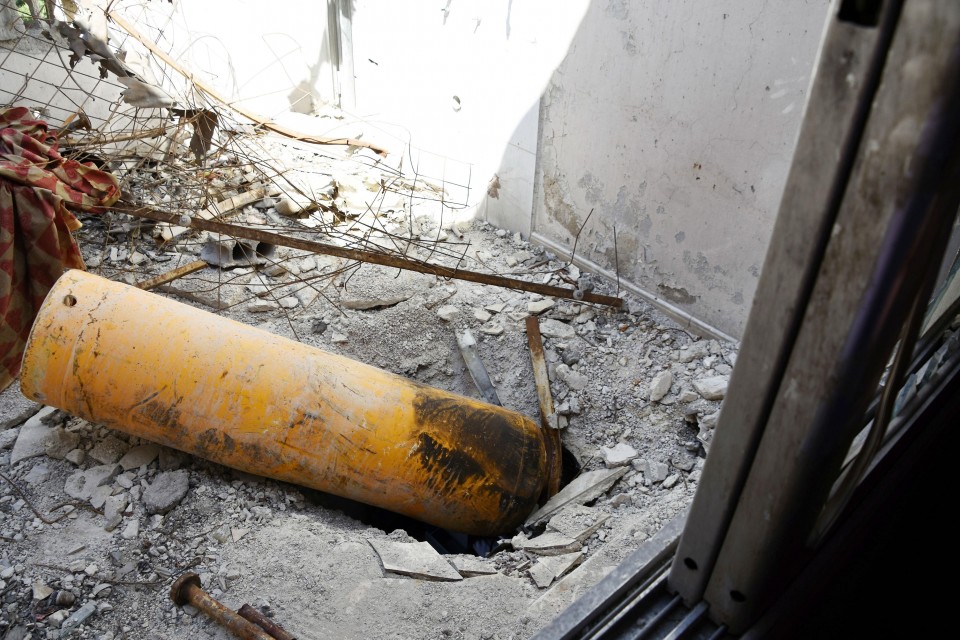 Victims showed symptoms suggesting chemical weapons may have been used against civilians, which led to strikes on Syria by the United States, Britain and France.

Abu Mohammad, 35, said shells landed on the apartment around 7 p.m. and then "yellow smoke filled the cellar."

"It had a very strong smell like a mixture of detergent and bleach," said Abu Mohammad who refused to disclose his real name, fearing repercussions. The apartment is located near Shuhada Square (Martyrs Square) in central Douma. 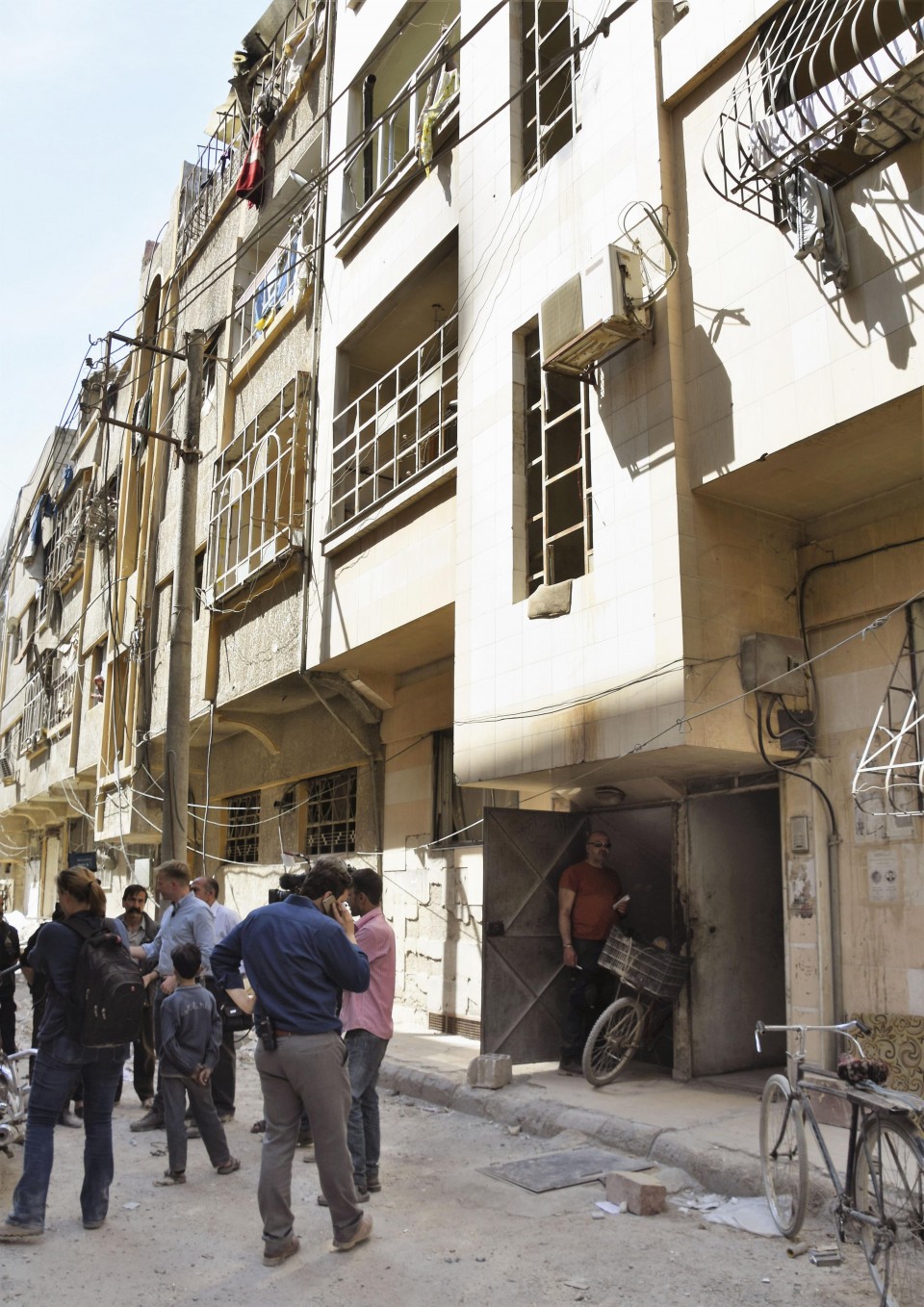 According to some residents, dozens of people, including many women and children, were hiding in the basement of the building as heavy airstrikes by regime and Russian forces resumed the previous day.

Hopes for reconciliation with Jaish al-Islam, the remaining opposition force in Douma, faded and the regime and allied forces engaged in a full-scale offensive.

Hanan and his neighbors said that after the gas entered, the residents tried to get out of the cellar and then escaped to other rooms in the apartment building.

Within hours, 25 people had died in a room on the first floor and nine others died in Hanan's apartment on the third floor. Some died on the street. The total number of dead reached around 50, the residents said.

Ichiro Akiyama, a former OPCW official, said he suspects the cylinder could be a new type of barrel bomb developed by the Russian military or the regime.

"You cannot fly a helicopter or drop (such a weapon) unless you control the air," said Akiyama who formally headed the inspectorate division of the organization based in The Hague.

Takahide Inoue, professor emeritus of Kyushu University in Japan who is well versed in chemical weapons, said the stories told by the Douma residents indicated that it was highly likely that chlorine gas was used in the attacks.

The odor, respiratory tract symptoms and the fact it took some time before the victims died backed such a conclusion, Inoue said.

"Since chlorine gas is heavy, it can reach the basement after landing on the roof of a four-story building.

If about 50 people died, the amount and concentration must have been very high," Inoue said.

The U.S. government suspects sarin was also used in the incident in Douma, which Inoue disagreed with.

"Sarin is light so it does not go down but goes up. It has no smell and kills immediately after absorption."

Another expert on chemical and biological weapons said after being shown photos of the apartment building that it doubtful the cylinder found on the roof played a role.

The container appeared too small for the amount of agent that could kill 50 people, the expert said.

Given many people died in the underground level, someone could have released the gas from several containers on a vehicle in front of the apartment building, the expert said, implying that anti-Assad people may have been involved.

Brig. Gen. Haytham Kharraj of the Assad regime forces told Kyodo, "I assert that the poisonous gas was used by the opposition, with the backing of the United States, Britain, France and Zionists," referring to Israel. He did not provide any basis for his claim.

The United States, Britain and France have said the Assad regime used chemical weapons without presenting hard evidence related to this attack.

"We don't expect any hard evidence to come out. No one can know the truth," a source close to the OPCW said.