A female mayor was forced to give a speech outside a sumo ring on Friday after being refused entry because of her sex, just two days after the Japan Sumo Association drew heavy criticism for telling women to leave the ring even though they were trying to rescue a collapsed man.

The raised ring, called dohyo, is regarded as sacred and women, considered "ritually unclean" in the male-only sport of sumo, are forbidden from entering.

"Female mayors are also humans. I am frustrated that I cannot give this speech on the dohyo just because I am woman," Tomoko Nakagawa, mayor of Takarazuka, Hyogo Prefecture, said in her speech from a platform set up beside the ring at a sumo event in the western Japanese city.

Nakagawa, 70, saw on TV that the collapsed man -- also a mayor -- was giving a speech on the dohyo in a similar sumo event on Wednesday when he suffered a stroke, and told the JSA she would like to speak from the ring. Her request was turned down, as the JSA has done so over the past 30 years when approached by female politicians.

"The times have changed and the number of female mayors is increasing. One day, we might have a female prime minister," Nakagawa said. "It is important to have courage to change what should be changed," the mayor said while the audience applauded. 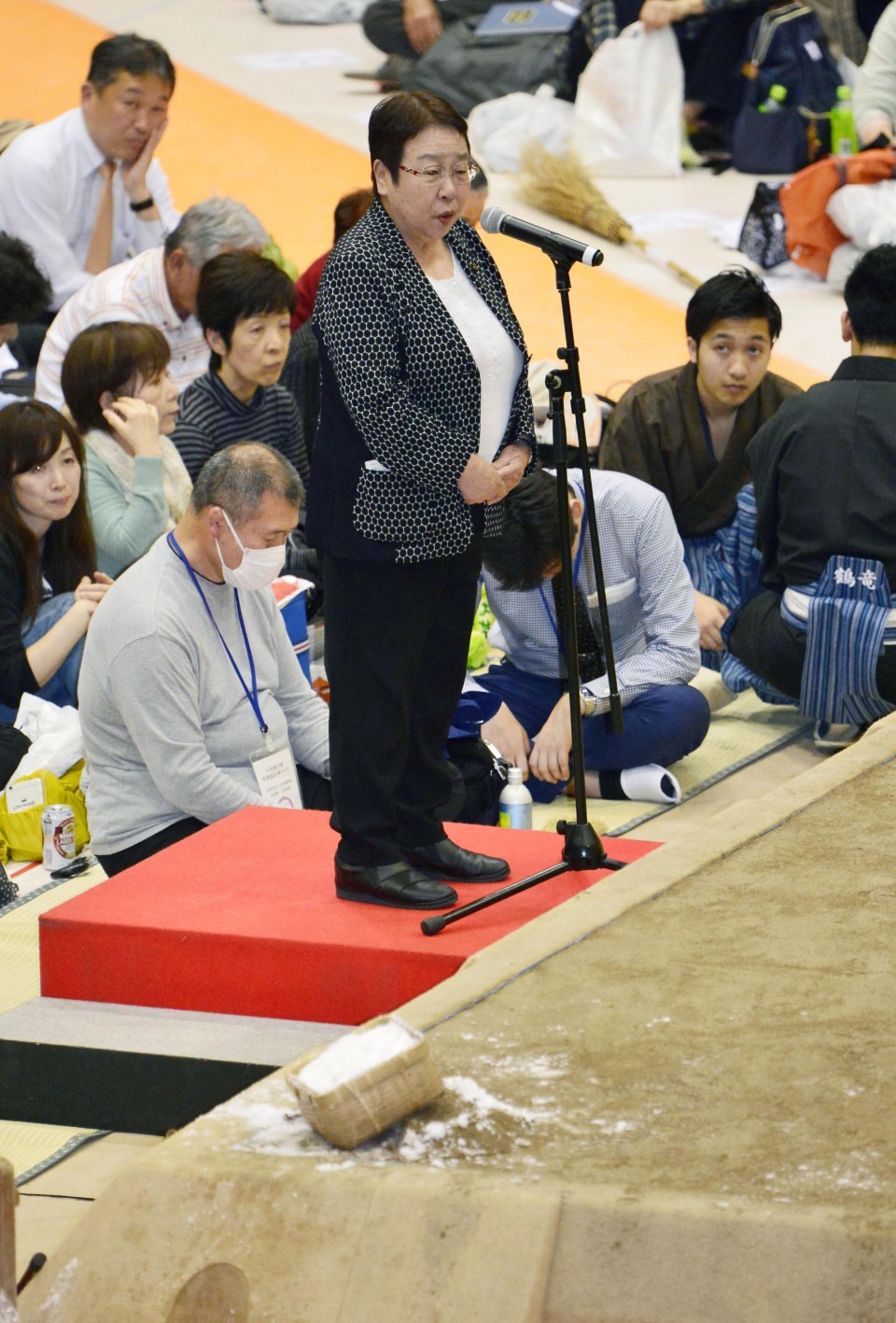 Nakagawa's disappointment follows Wednesday's incident in Kyoto Prefecture, where a referee requested female spectators, including a nurse, to leave the ring where they were providing emergency treatment to Maizuru Mayor Ryozo Tatami.

According to Maizuru officials, the nurse climbed into the ring from spectators' seats, identifying herself as a nurse who could give a heart massage.

While the incident made headlines overseas as symbolic of Japan's discrimination against women, Chief Cabinet Secretary Yoshihide Suga said he is "aware of various opinions on the matter, which should be judged voluntarily by the JSA."

The top government spokesman also said rescuing a human life "should be given the top priority."

Seiko Noda, minister in charge of women's empowerment, said the JSA "should decide on its course of path following the latest incident." 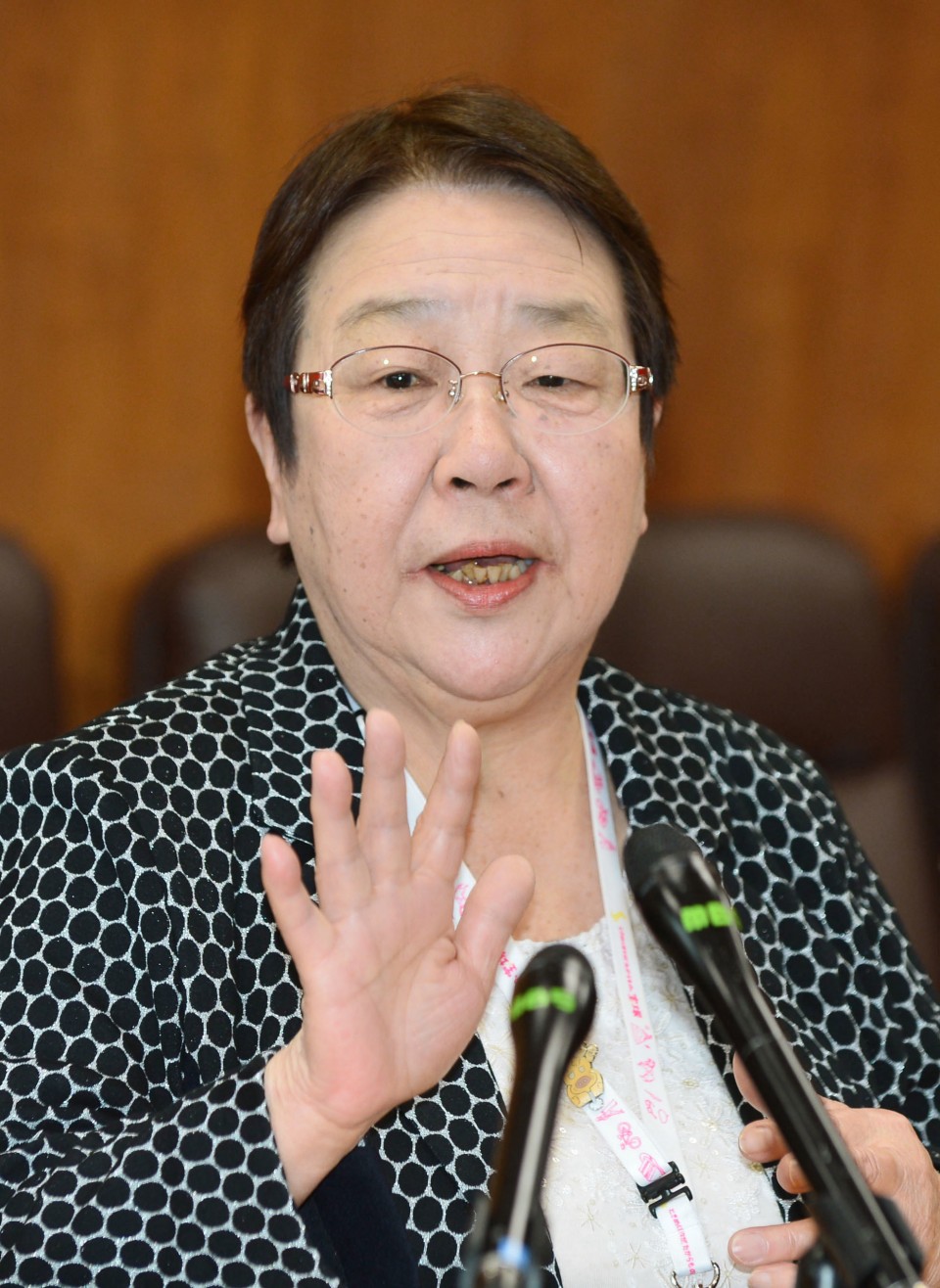 (Nakagawa lets out her frustarations during a press conference after the event.)

Noda also said she was previously banned from entering a tunnel construction site because a female presence would anger the god of mountains.

Yuriko Marumoto, a gynecologist who is also involved in protection of women's rights, said, "If I were in the same situation I would have also gone onto the dohyo" to save the mayor.

"I would never have a moment to hesitate by thinking, 'since I am a woman I shouldn't go onto the dohyo. I should have a man do it.'"

The JSA, acknowledging that the referee's call for women to leave the dohyo was inappropriate, offered an apology and has said it will consider measures to be taken in emergencies.

However, Mitsuru Yaku, an illustrator who was formerly a member of a sumo association committee, said the JSA should not just deal with the issue by saying that life-saving circumstances will be an "exception" to the policy of banning women on dohyo.

"Even if the ban on women is abolished, there will be no negative influence on sumo events or on its nature as a religious ritual. It should be abolished at once," he said.

More on women being barred from sumo ring: