Pyongyang has confirmed with the South that it shares the common goal of realizing a nuclear-free Korean Peninsula, North Korean state-run media said Saturday, in the first local report about its leader Kim Jong Un's intention to move toward complete denuclearization.

At the historic summit on Friday, the leaders of the two Koreas also made an agreement to declare the end of the 1950-1953 Korean War later this year and move from the existing truce to a peace agreement, the Korean Central News Agency said.

KCNA reported a joint declaration released after the summit between Kim and South Korean President Moon Jae In. The contents of the "Panmunjom Declaration" reported by the news agency are almost the same as those announced by the South Korean government.

Ahead of a meeting between Kim and U.S. President Donald Trump, expected to be held by early June, North Korea expressed a serious intent to make its first summit with the United States a success, with Washington urging Pyongyang to give up all its nuclear weapons. 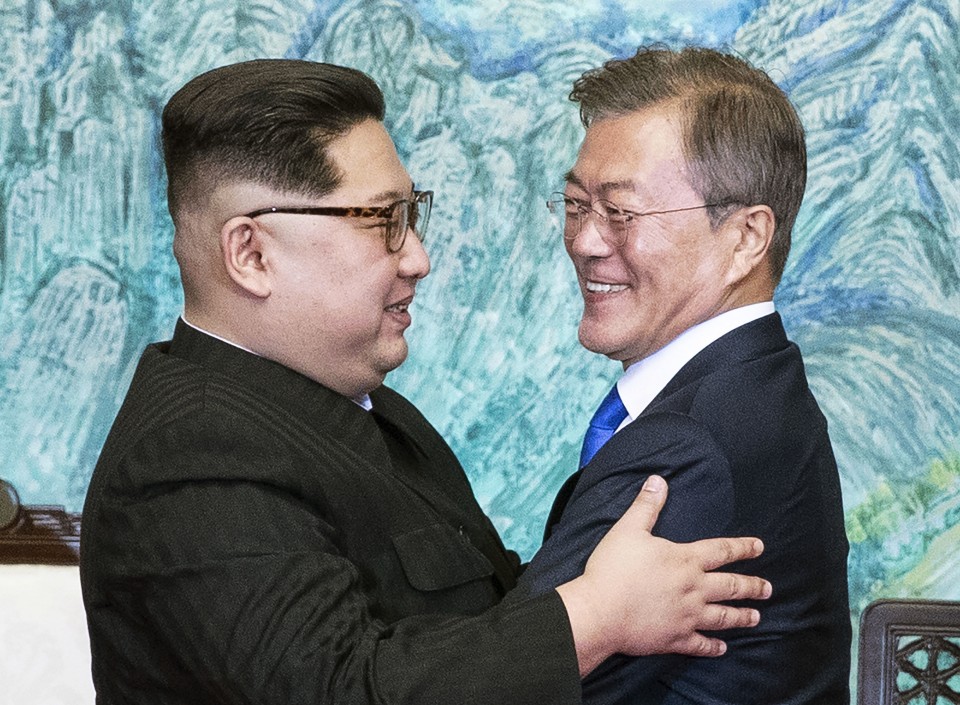 During a joint press announcement with Moon after Friday's summit, Kim said he will implement the agreement reached with Moon, but he did not specify concrete steps to attain the goal, raising skepticism about whether Trump will be persuaded by Kim's decision.

"At the talks, both sides had a candid and open-hearted exchange of views on the matters of mutual concern, including the issues of improving the North-South relations, ensuring peace on the Korean Peninsula and the denuclearization of the peninsula," KCNA said.

Kim was quoted by the news agency as telling Moon that he felt "the national mission and duty to usher in a new era of peace and reunification after putting an end to the history of division and confrontation."

At a plenary meeting of the Central Committee of the Worker's Party of Korea earlier this month, North Korea decided to dismantle its Punggye-ri nuclear test site in the country's northeast, as well as suspend nuclear and missile tests.

The ruling party also said it "will concentrate all efforts on building a powerful socialist economy," KCNA reported, indicating Kim will put more emphasis on economic improvement than on the development of nuclear weapons.

Pyongyang, however, has kept mum about whether it will discard its existing weapons of mass destruction.

North Korea remains technically at war with South Korea and the U.N. Command, led by the United States, after the Korean War ended in a cease-fire.

The meeting between Kim and Moon was the first inter-Korean summit in over a decade. The two countries' leaders had held formal talks only twice, in 2000 and 2007.

At the envisioned summit with the United States, North Korea is likely to call on Washington to accept the continuation of its hereditary regime, Pyongyang's cherished goal.

Kim reportedly told Chinese President Xi Jinping during their summit last month that the issue of denuclearization of the Korean Peninsula can be resolved if South Korea and the United States create a peaceful and stable atmosphere.

Friday's summit took place at a South Korean facility known as the Peace House in the truce village of Panmunjeom. Kim became the first North Korean leader to cross the border with the South after the Korean War.

In a conciliatory gesture, Kim and Moon jointly planted a commemorative pine tree on the Military Demarcation Line that runs through the middle of the Demilitarized Zone and had dinner together with their wives.

After months of missile and nuclear tests that raised tensions on the Korean Peninsula, Kim suddenly extended an olive branch, saying in his New Year's address on Jan. 1 that he would prepare for his country's participation in the Feb. 9-25 Pyeongchang Winter Olympics hosted by South Korea.

In March, Kim met with Moon's special envoys in Pyongyang and held a surprise summit with Xi in Beijing later in the month during his first foreign trip since becoming North Korea's leader following the death of his father Kim Jong Il in 2011.