The approval rate was down 5.4 percentage points from the previous survey conducted two weeks ago and is the second lowest poll result since Abe commenced his second stint as prime minister in 2012. The figure fell below 40 percent for the first time since a survey in mid-March.

A total of 79.4 percent of respondents were dissatisfied with Abe's explanation about a local government document which, when its existence was confirmed, showed that his then secretary called the veterinary school project a "matter concerning the prime minister" during talks with local government officials in 2015.

Abe has so far denied issuing any instructions that would have benefited his friend's campaign to secure government approval to open Japan's first veterinary department of a university in half a century.

The disapproval rate for the Cabinet stood at 52.6 percent, up from 47.5 percent. The government has also been mired in scandals of document-tampering linked to another favoritism allegation leveled at Abe in connection with a state-owned land sale and coverup of activity logs of a past Self-Defense Forces mission in Iraq.

A total of 67.7 percent said the Abe Cabinet is responsible for the series of instances of inappropriate handling of official documents.

The scandals may also overshadow Abe's bid to be re-elected in September as the leader of the ruling Liberal Democratic Party. His return would allow him to continue pursuing his conservative agenda to revise the Constitution, drafted by the U.S.-led occupying forces after World War II.

On the question on who should be elected in the LDP presidential election, Abe remained respondents' third preference after former defense minister Shigeru Ishiba and Shinjiro Koizumi, a rising star in the ruling party and a son of charismatic former Prime Minister Junichiro Koizumi.

Ishiba and Shinjiro Koizumi won 26.6 percent and 25.2 percent of support, respectively, while Abe secured 18.3 percent. It is the first time that Abe's support has slipped below 20 percent.

About 57 percent opposed any constitutional revision while Abe is serving as prime minister and 32.3 percent expressed support.

By party, the LDP remained dominant with 36.8 percent backing, but it was down 2.3 points from the previous survey.

Meanwhile, 66.3 percent said the former secretary Tadao Yanase, who has come to the public's attention due to the document on the veterinary school project, should be summoned to the Diet to offer an explanation, while 27.6 percent said that is not necessary.

Yanase has insisted that he has no memory of meeting the local government officials as recorded in the document.

Natsuo Yamaguchi, the head of the LDP's junior coalition ally Komeito party, indicated that Yanase should speak at the Diet over the issue, saying in a speech in Aomori Prefecture on Sunday that he cannot "overlook" the existence of the document. 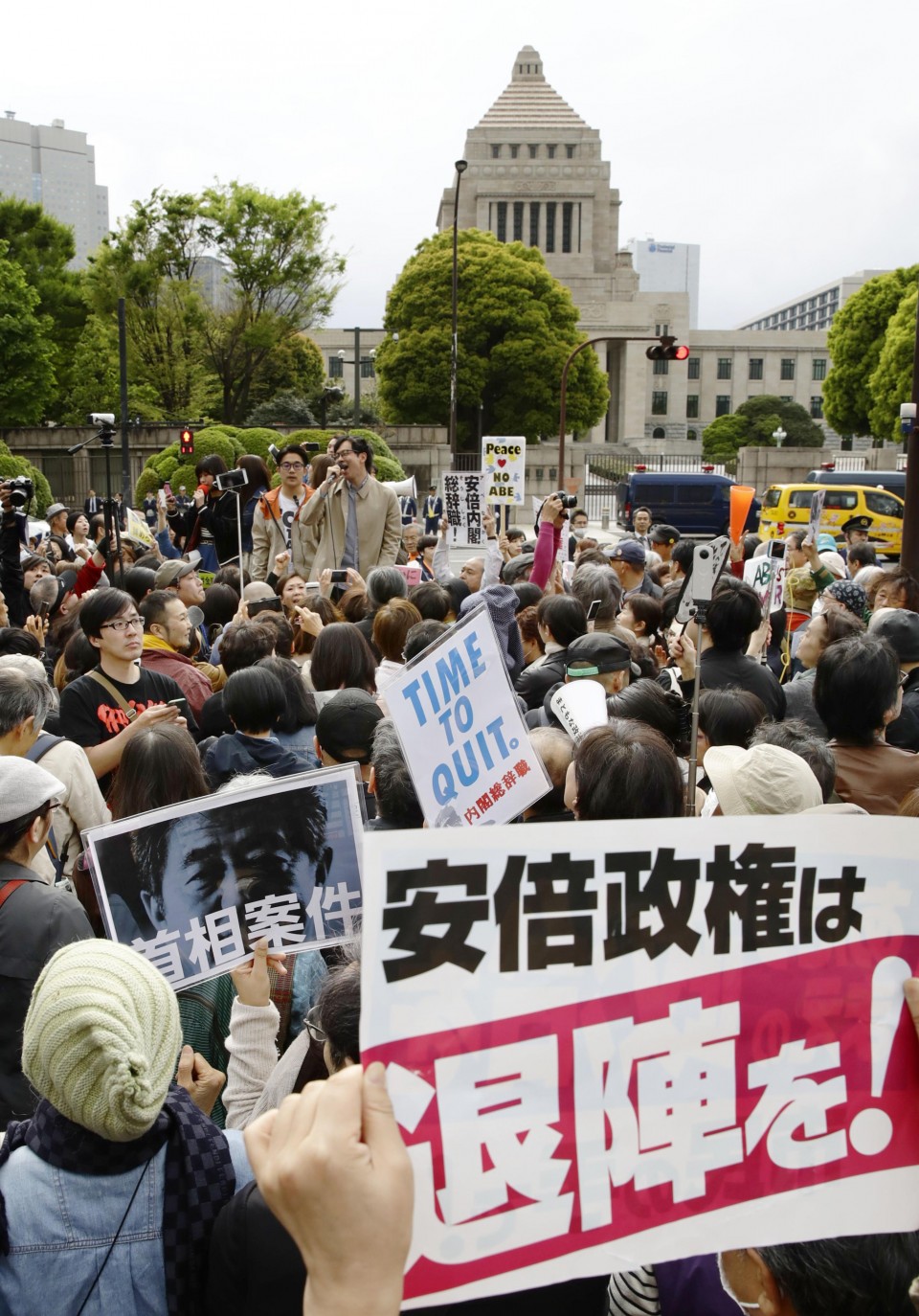