Malala says she dreamed for years of returning to Pakistan

Nobel Peace Prize laureate Malala Yousafzai said Thursday she dreamt the past five years of returning to Pakistan, and her return Thursday morning -- for the first time since being shot in the head at age 14 -- was a dream come true.

"While walking on the roads of New York and London, I always imagined that I'm in Pakistan. This is a dream come true," she said at a "Meet Malala" conference at the Prime Minister's Office.

"I never wanted to leave Pakistan," she said with tears in her eyes.

Malala was flown to Britain by the Pakistan government for surgery after being shot in the head at point blank range in October 2012 by a Taliban assassin who had boarded her school bus and asked, "Who is Malala?"

Malala had enraged local Taliban leaders where she lived in the Swat valley in remote northwestern Pakistan with her fierce advocacy of educating girls.

She is now 20, and studying at Oxford University for a bachelor degree in philosophy, economics and political science.

Details of Malala's first trip back to Pakistan are cloaked in secrecy, presumably due to security concerns.

After she was shot, The New York Times quoted a Taliban spokesman, Ehsanullah Ehsan, as confirming that she had been targeted for crusading for the education of girls, which he described as an "obscenity."

"She has become a symbol of Western culture in the area; she was openly propagating it," Ehsan reportedly said, before adding that if she survived, the militants would certainly try to kill her again. 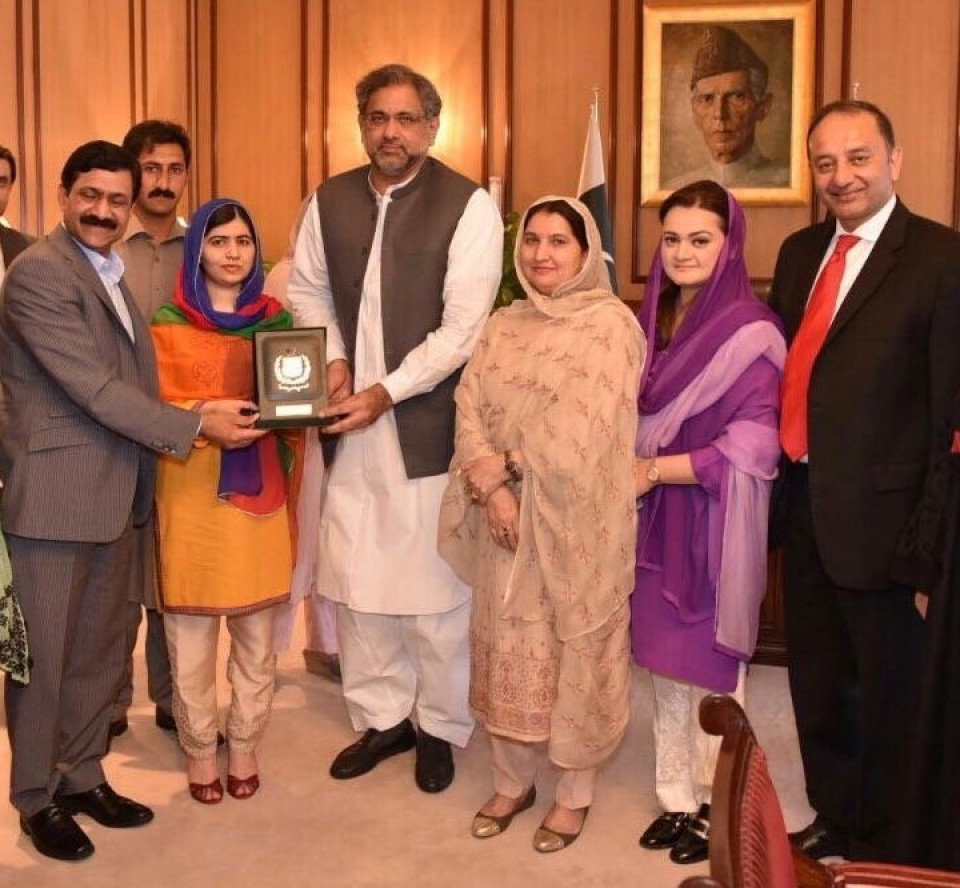 Speaking at the "Meet Malala" conference, attended by parliamentarians, senior government officials and activists championing human rights and girls' education, Prime Minister Shahid Khaqan Abbasi described Malala as "our daughter who is famous all over the world."

"The world has given you respect and so do we. You are not an ordinary citizen now and your security is our responsibility which we will provide. Pakistan is your home. You can come back anytime you want," he said in his welcome speech.

"Please visit your hometown," Amir Muqam, a parliamentarian from where Malala is from in Swat, said in his welcoming remarks.

In his remarks, the prime minister noted the terrible toll in lives that terrorism has taken in Pakistan.

"We have fought a very difficult war," Abbasi said. "Six thousand soldiers and 25,000 civilians were sacrificed in this war. We are still fighting and we will fight. Pakistan is fighting the biggest war against terrorism throughout the world," the prime minister said.

Malala is staying at a five star hotel in Islamabad with full security and protocol provided by the government. No meeting with the press is planned so far. It was also not clear if she would visit Shangla in Swat where the Malal Foundation has built a school whose first students began attending class this month.