The Justice Ministry began transferring seven of 13 former AUM Shinrikyo cult members on death row from the Tokyo detention center to other facilities across the country, government sources said Wednesday, likely moving them one step closer to execution.

With the AUM-related trials wrapping up in January, the ministry is considering when they should be hanged for the series of crimes they committed that left 29 people dead. While the transfer was completed for six death row inmates Wednesday, the seventh person is set to arrive on Thursday.

All 13 inmates sentenced to death for crimes committed while members of the doomsday cult had been housed in the Tokyo detention facility, including AUM founder Shoko Asahara, 63, who masterminded the 1995 sarin nerve gas attack on the Tokyo subway system that killed 13 people and left over 6,000 people ill. 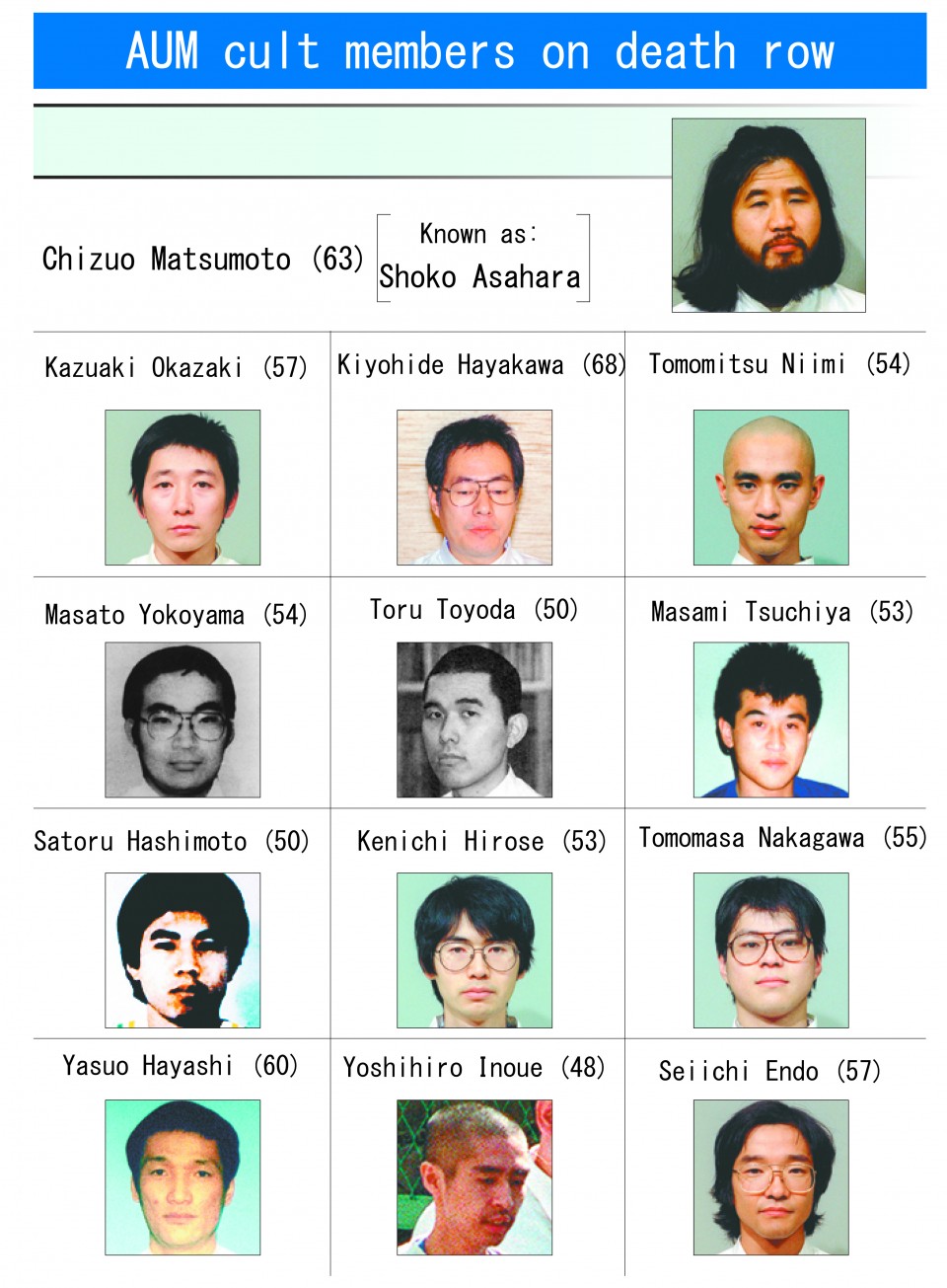 Asahara, whose real name is Chizuo Matsumoto, remains at the Tokyo detention center, the sources said.

The seven death row inmates who were transferred are Tomomasa Nakagawa, 55, Tomomitsu Niimi, 54, Yasuo Hayashi, 60, Kiyohide Hayakawa, 68, Yoshihiro Inoue, 48, Masato Yokoyama, 54, and Kazuaki Okazaki, 57. Hayashi and Okazaki are currently known as Koike and Miyamae as they have changed their surnames.

There are execution facilities in Sapporo, Sendai, Tokyo, Nagoya, Osaka, Hiroshima and Fukuoka.

Of the seven death row inmates, two each were sent to either Nagoya or Osaka while one arrived in Sendai and another in Hiroshima. The seventh person is set to arrive at the Fukuoka detention center on Thursday.

It is unclear who went to which facility, except for Inoue who was sent to Osaka. Inoue met with his mother after the transfer and she said Inoue looked "shaken."

Inoue, who was involved in 10 AUM-related crimes including the subway attack, filed Wednesday at the Tokyo High Court for a retrial.

Japan has long tended to avoid executing death-row inmates while their retrial pleas were pending, but then Justice Minister Katsutoshi Kaneda said last year such a plea does not impede execution.

Around 190 people with ties to the cult were indicted. In addition to the 13 sentenced to death, six others were given life sentences.

The 13 inmates were involved in the Tokyo subway attack; the 1989 murders of Tsutsumi Sakamoto, an anti-AUM lawyer, his wife and son; and another sarin gas attack in Matsumoto, Nagano Prefecture, in 1994.

Toxicologist Anthony Tu, 87, who is investigating the AUM incidents, visited Nakagawa at the Tokyo detention center on Tuesday. Nakagawa told him that he could be transferred and that it could be their last meeting, according to Tu.

Families of the victims of the AUM attack expressed their emotions ahead of the inmates' likely executions.

Minoru Kariya, 58, who lost his father in the 1995 notary clerk abduction and confinement case, welcomed the ministry's move. "It has been frustrating that the taxes the victims and their families have paid are used to keep the inmates alive."

The first batch of trials ended when the ruling on former senior AUM member Seiichi Endo, 57, was finalized in December 2011. But court actions resumed when three former AUM followers, who had been on the run for nearly 20 years, were arrested in 2012.

The series of trials finally came to a close in January after the Supreme Court upheld a high court life sentence for Katsuya Takahashi, 59, one of the three who had been on the run.

In Japan, it is customary not to hang death row inmates until the sentences of their accomplices are finalized.