A 69th-minute winner from substitute Oleksandr Karavayev proved the difference Tuesday as Ukraine defeated Japan 2-1 in the second of two World Cup warm-ups for the Samurai Blue in Belgium.

Tomoaki Makino equalized for Japan after a Naomichi Ueda own goal put Ukraine ahead, but it was the Eastern Europeans who created the most chances on a damp afternoon in the eastern Belgium city of Liege.

Japan is "still not ready" but will be in a better position for its next matches in preparation for the World Cup in Russia starting in June, coach Vahid Halilhodzic said. 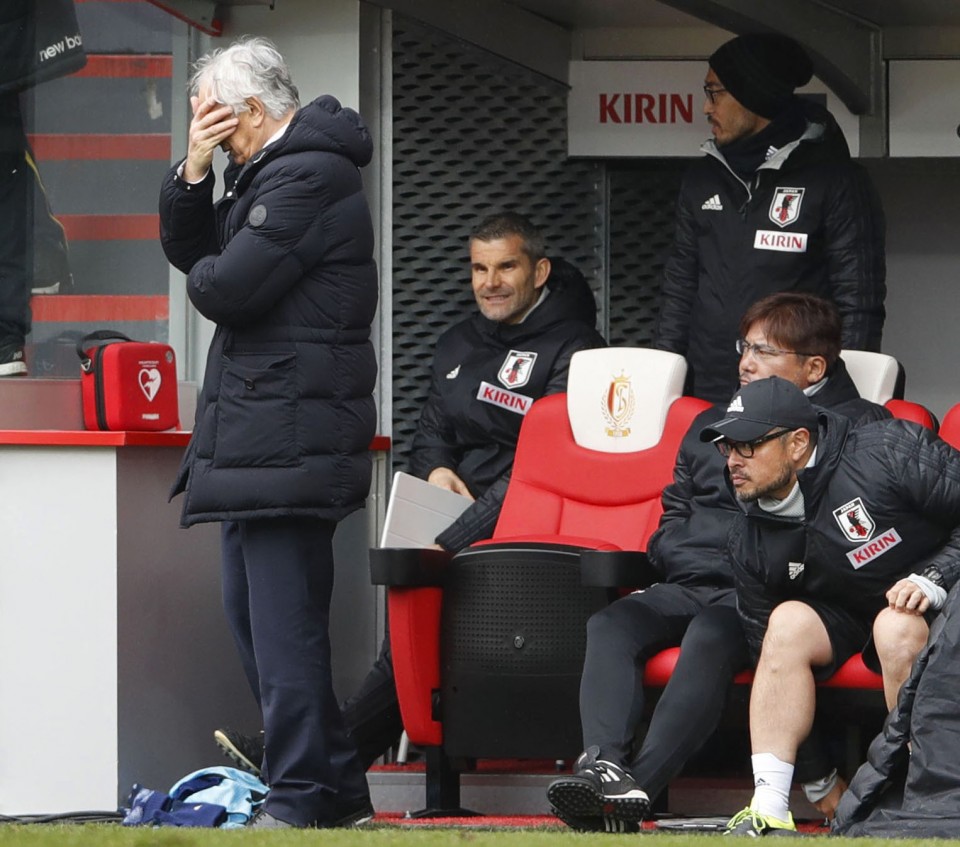 "We lost, but it was a better game than last time," Halilhodzic said, referencing Japan's previous friendly, a 1-1 draw Friday against Mali. "We had a few chances to score, but unfortunately they did not result in goals."

Halilhodzic retained just three players from the starting eleven from the game against Mali on the same ground. Among the notable inclusions was veteran playmaker Keisuke Honda, making his first start for the national team in six months.

The Pachuca midfielder was in the thick of the action early, cutting off an attempted cross from the left wing by Ukrainian attacking midfielder Marlos with one of his first touches.

He then looked to create Japan's first chance in the sixth minute, making a run down the right wing before picking out Genki Haraguchi in the box. However, the Fortuna Dusseldorf forward lost possession with a heavy first touch. 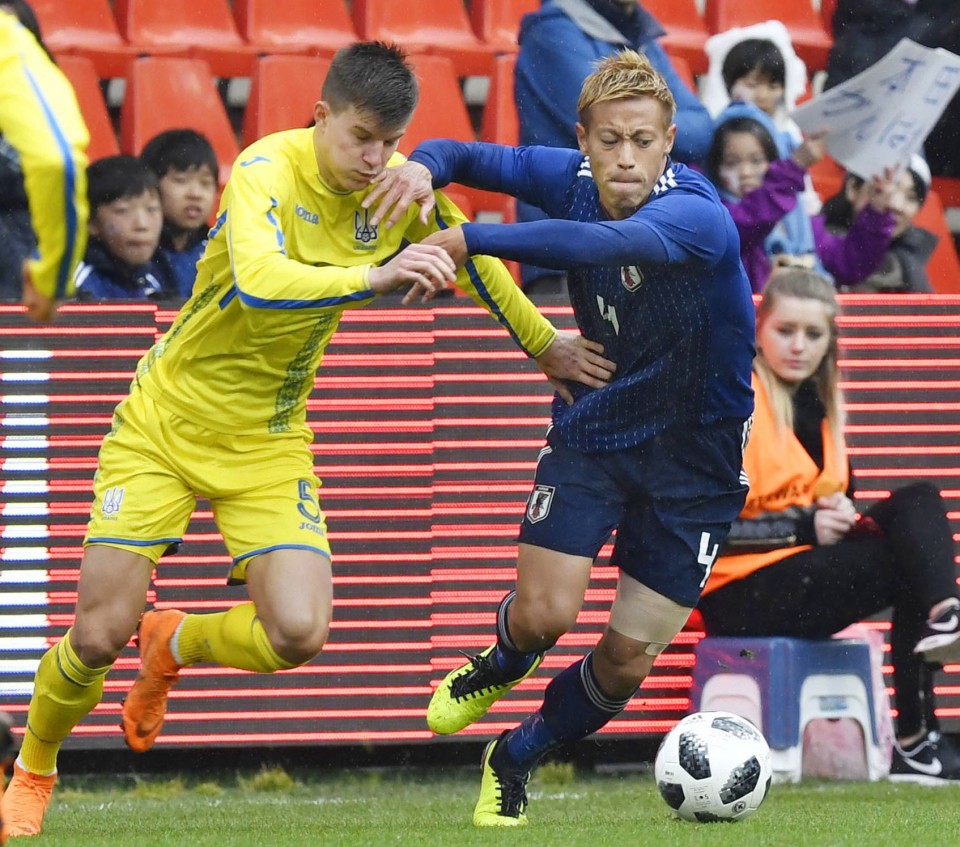 It was the Ukrainians who were more adventurous early, exploiting a lack of defensive organization to repeatedly put Japan under pressure, particularly on the left side.

Ukraine took the lead in the 21st minute when Shakhtar Donesk defender Yaroslav Rakitskiy unleashed a shot from 5 meters outside the box that left goalkeeper Eiji Kawashima flat footed after it took a deflection off defender Ueda, who was credited with the own goal.

Ukraine nearly doubled their lead in the 30th minute after Marlos made a storming run through midfield before putting Ruslan Malinovskiy through inside the box, but the Genk midfielder launched his shot high and wide under pressure from Ueda.

Defender Makino -- one of the three players to start both friendlies in Liege, along with captain Makoto Hasebe and wing-back Yuto Nagatomo -- equalized for Japan in the 41st minute. 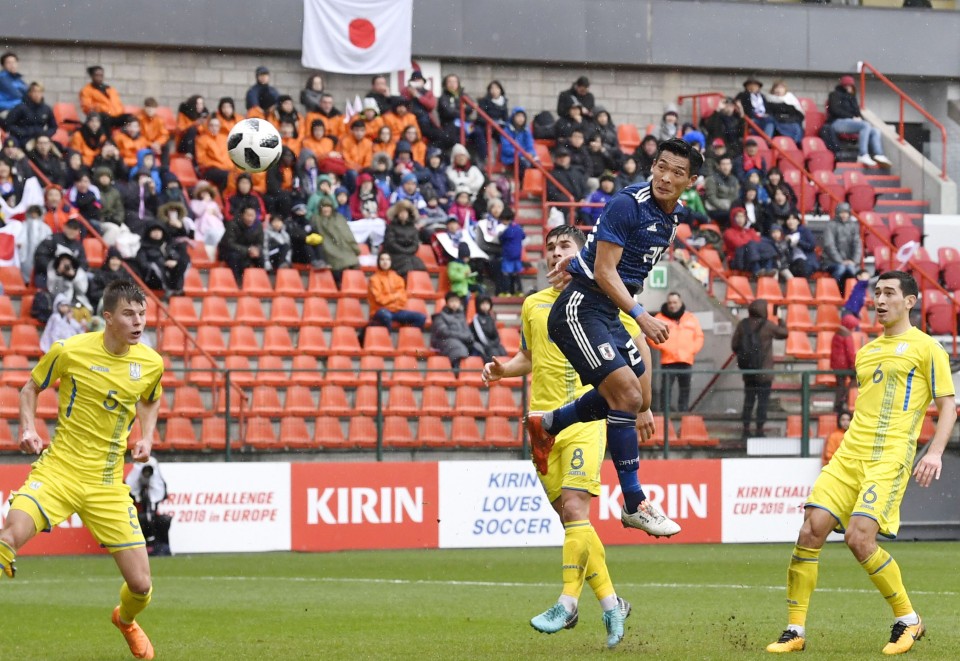 The Urawa Reds center back shook off his marker and rose to meet a well-placed free kick from Gaku Shibasaki, heading home from directly in front.

Gotoku Sakai came within inches of opening the scoring with an own goal in the 16th minute after the Hamburger SV defender's attempt to corral a cross saw the ball ricochet into his own crossbar.

Japan were let off the hook in the 40th minute after Mykola Matviyenko penetrated the defense before playing a cross from the left side of the box to striker Artem Besyedin, who was unable to connect at full stretch directly in front of goal.

Japan showed greater attacking intent at the start of the second half, but a lack of precision saw the Samurai Blue repeatedly give away possession cheaply.

Ukraine scored the winner after Schalke winger Yevhen Konoplyanka beat multiple defenders as he streaked down the left touchline before crossing from inside the box. 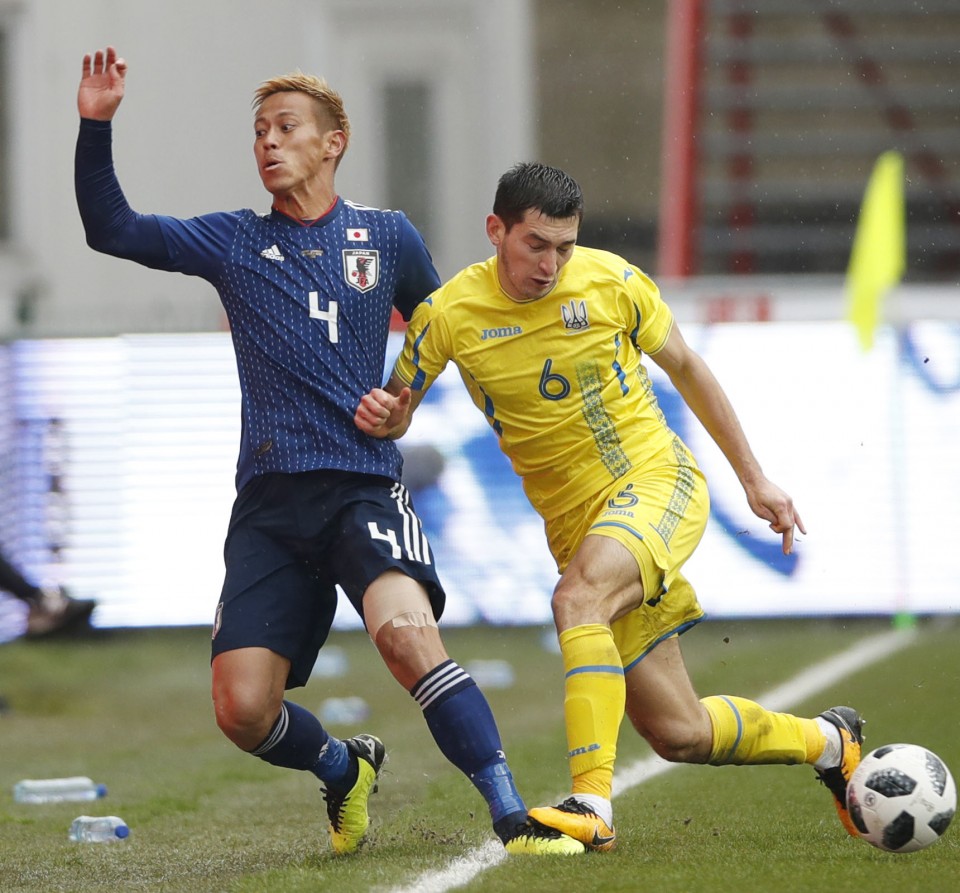 After missing its initial target the ball found its way to Karavayev, who fired home from just inside the right side of the penalty area.

Midfielder Shoya Nakajima, who scored the last-minute equalizer on debut against Mali, had two shots in quick succession in the 87th minute but was unable to draw Japan level. The first, from just inside the box, was blocked by defender Ivan Ordets, with the ball rebounding straight back to Nakajima. The midfielder, who came on for Shibasaki as an 80th-minute substitution, put his next shot straight at Ukraine keeper Andriy Pyatov.

Nakajima, who plays club football for Portuguese side Portimonense on loan, put on another impressive display in his late cameo. In the third minute of injury time, he pounced onto an attempted clearance from Pyatov and ran toward the box, drawing a free kick just on the edge of the penalty area.

Nakajima took the subsequent free kick, curling it around the wall, but it was batted away by a diving Pyatov. 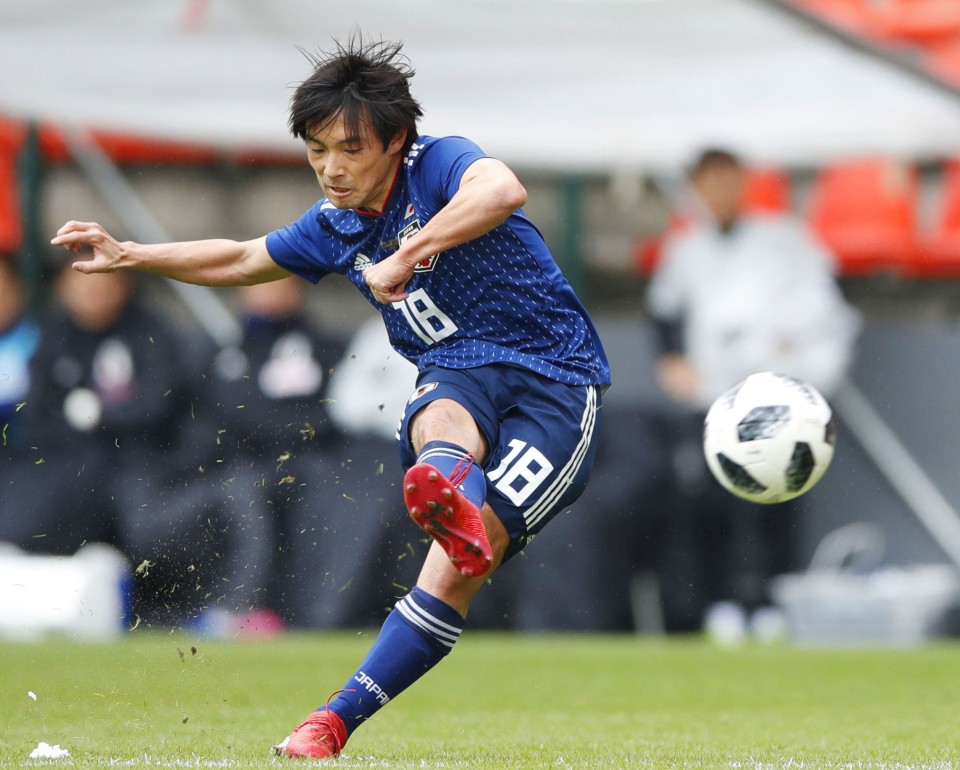 The 23-year-old striker created Japan's final chance of the game, launching a diagonal cross from the left of the box to a streaking Yuya Kubo, who was unable to put a shot on target.

The Samurai Blue open their World Cup campaign against Colombia on June 19 and play Senegal on June 24 before the final group match against Poland on June 28.