Japan's Ground Self-Defense Force underwent its biggest organizational shake-up Tuesday, in the midst of a challenging security environment, with its command streamlined for flexible operations nationwide and the creation of amphibious forces tasked with defending remote islands.

The launch of the Ground Component Command to provide unified command over regional armies and the Amphibious Rapid Deployment Brigade, Japan's version of the U.S. Marines, came as Tokyo seeks to beef up its defenses against North Korea's nuclear and missile programs and China's maritime assertiveness.

"We are expecting more situations in which the Ground, Maritime and Air Self-Defense Forces have to work together to rapidly respond at a nationwide level against ballistic missile launches, attacks on islands and major disasters," Defense Minister Itsunori Onodera said at a press conference, emphasizing the role of the Ground Component Command on such occasions.

A senior GSDF member said earlier that establishing a central command headquarters was a "deep desire" of the organization, which was established as part of the Self-Defense Forces in 1954.

Unlike the air and maritime services, the GSDF had no central headquarters to control its units, which belong to five regional armies, each operating under commanding generals. Therefore, orders had to be issued to each regional army to mobilize its divisions and brigades.

The GSDF's command structure remained decentralized amid bitter memories of the Imperial Japanese Army's intervention in politics and its role in wartime military aggression, some political experts say. 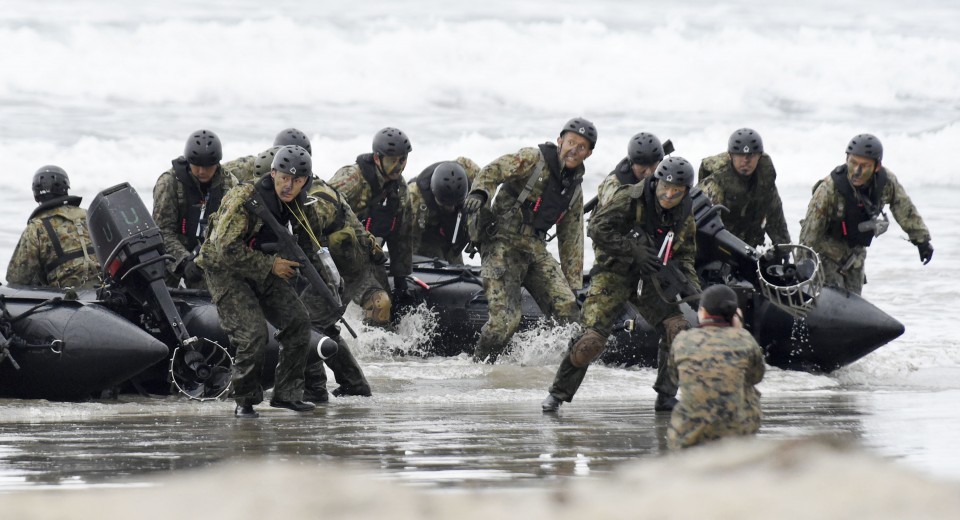 But a tougher security environment surrounding Japan has pushed the government to launch the Ground Component Command under its medium-term defense buildup plan approved in 2013.

Onodera asserted that civilian control over the military will be properly maintained "based on prewar lessons."

Headquartered at the GSDF's Asaka base that straddles Tokyo and Saitama prefectures, the Ground Component Command will play the role of coordinator not only with other SDF units but also with the U.S. military.

The GSDF's first full-scale amphibious operations unit -- the other highlight of the reorganization -- was launched with around 2,100 members mainly drawn from the Western Army's infantry regiment stationed at Camp Ainoura in Sasebo, Nagasaki Prefecture.

The GSDF amphibious brigade would be tasked with retaking Japanese islands, stretching southwest from Kyushu toward Taiwan, if they are illegally occupied.

The isles include the Japan-controlled Senkaku Islands in the East China Sea that are claimed by China, which calls them Diaoyu. Chinese government vessels have repeatedly entered Japanese waters around the islands, creating tension. 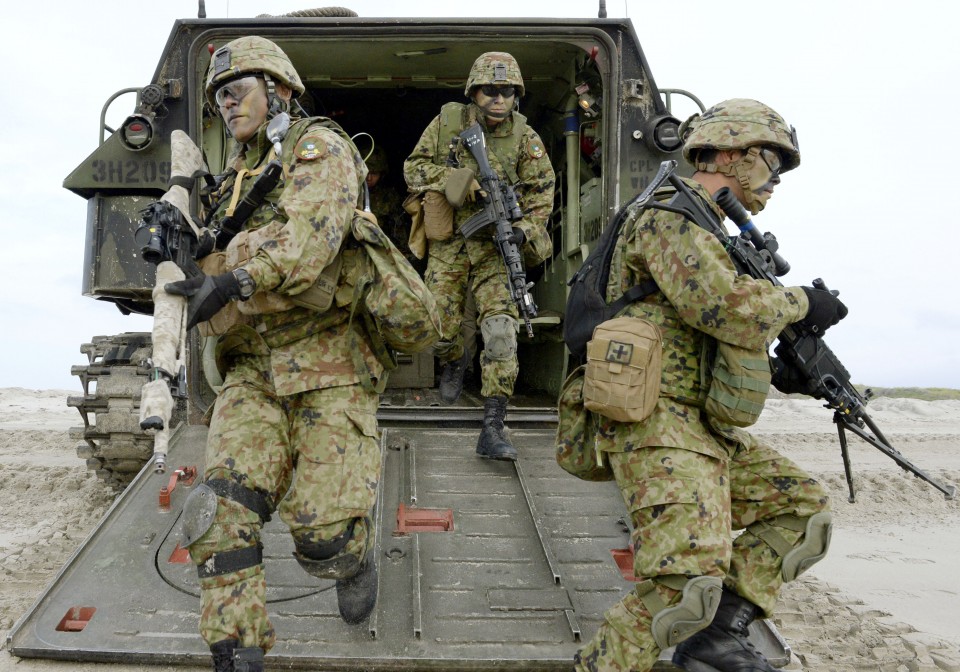 But the amphibious brigade still appears to be a fledgling unit, with the government yet to secure a permanent base for the Osprey tilt-rotor aircraft that will play a key role in the transportation of troops.

The government plans to deploy 17 newly acquired U.S.-made V-22 Ospreys at Saga airport in southwestern Japan, with their delivery to Japan expected from around the fall. But the government has not won local consent and is not in a position to push through the plan following a GSDF helicopter crash in Saga Prefecture in February.

A government source said Tuesday that it is considering tentatively placing the Ospreys at a GSDF base in Kisarazu, Chiba Prefecture, southeast of Tokyo. But uncertainties remain over the plan.

Kisarazu Mayor Yoshikuni Watanabe reacted negatively, saying at a press conference, "It doesn't make sense to pick Kisarazu when Saga airport won't do." But he also admitted that "it is the role of municipalities to cooperate with defense policy."

The central government hoped to find a site closer to Camp Ainoura to temporarily deploy the Ospreys, but it is leaning to the view that there is no alternative to Camp Kisarazu that also functions as a regular maintenance service site for Ospreys, currently those belonging to the U.S. military in Japan, according to the source.