The two Koreas agreed to hold their first summit in over a decade in late April, with the North voicing a readiness to hold denuclearization talks with the United States, the South said Tuesday, in a breakthrough that has lifted hopes for peace on the Korean Peninsula and beyond.

While vowing to suspend missile and nuclear activities during the period of dialogue with Washington on denuclearization and normalization of bilateral ties, Pyongyang also said there is no reason to possess nuclear weapons in the presence of security guarantees and the absence of threats, according to South Korean officials briefing reporters.

As North Korea has shown an intention to move in the direction of denuclearization, the possibility is sharply increasing that Washington and Pyongyang will sit at the same table in the near future.

The agreements were reached in talks held in Pyongyang on Monday between North Korean leader Kim Jong Un and special envoys of South Korean President Moon Jae In.

"Conditions have been fully met" for the early resumption of U.S.-North Korea dialogue, said Chung Eui Yong, head of the National Security Office, who led the delegation. 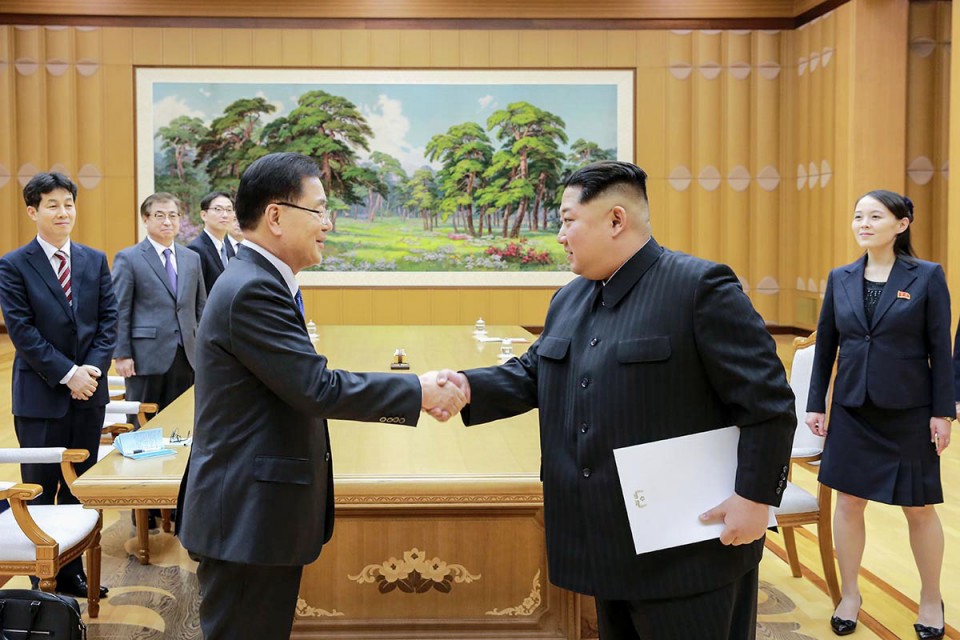 Responding to reports of the agreements, U.S. President Donald Trump wrote on Twitter, "Possible progress being made in talks with North Korea. For the first time in many years, a serious effort is being made by all parties concerned."

"The World is watching and waiting! May be false hope, but the U.S. is ready to go hard in either direction!" he added.

The two Koreas also agreed to establish a hot-line between Kim and Moon and to use it to hold their first phone conversation before the summit, which would be the third so far and the first since 2007. The summit will be held at the truce village of Panmunjeom.

As for U.S.-South Korea joint military drills scheduled to resume in April after the Winter Paralympics conclude, Kim was said to have told the envoys that he understands the South's stance that it is hard to postpone them again or suspend them.

Washington and Seoul agreed to suspend their joint drills during the Feb. 9-25 Winter Olympics in South Korea's Pyeongchang and through the March 18 end of the Pyeongchang Winter Paralympics, to which Pyongyang has vowed to also send its athletes.

North Korea has denounced the drills as rehearsals for invasion, but it may have turned around with an eye on possible talks, where Pyongyang could try to make Washington accept the continuation of the country's hereditary regime, some analysts say.

The United States has reiterated any dialogue with North Korea must focus on it giving up its nuclear weapons programs.

The North's official media said earlier Tuesday that Kim pledged to prepare for a summit with South Korea, expressing willingness to ease military tensions in talks with the envoys.

The meeting between Kim and the delegation of Moon's envoys took place "in a compatriotic and sincere atmosphere," the Korean Central News Agency said.

It was the first time Kim had direct talks with South Korean officials since he became North Korea's supreme leader following the death of his father Kim Jong Il in 2011.

"Hearing the intention of President Moon Jae In for a summit from the special envoy of the south side, (Kim Jong Un) exchanged views and made a satisfactory agreement," KCNA said.

Kim "gave the important instruction to the relevant field to rapidly take practical steps for it," the news agency added, as Moon has asked North Korea to resume dialogue with the United States as a condition for an inter-Korean summit.

As the two Koreas remain technically at war after the 1950-53 Korean War ended in a cease-fire, their leaders have held formal talks only twice, in 2000 and 2007.

Late last month, North Korea surprisingly told the South that it is "fully open" to talks with the United States.

The United States and Japan have been worried that Pyongyang is aiming to weaken international sanctions against it by cozying up to Seoul and buy more time to advance its missile and nuclear technologies, warning against North Korea's "smile diplomacy."

The South Korean envoys arrived in the North on Monday afternoon and returned to the South on Tuesday.

On Monday, Kim hosted a dinner for the visiting delegation, which delivered a letter from Moon to the North Korean leader, KCNA said, adding that he had a photo session with the special envoys.

The delegation was composed of five special envoys and five working-level officials. Chung is in charge of communication with U.S. government officials. 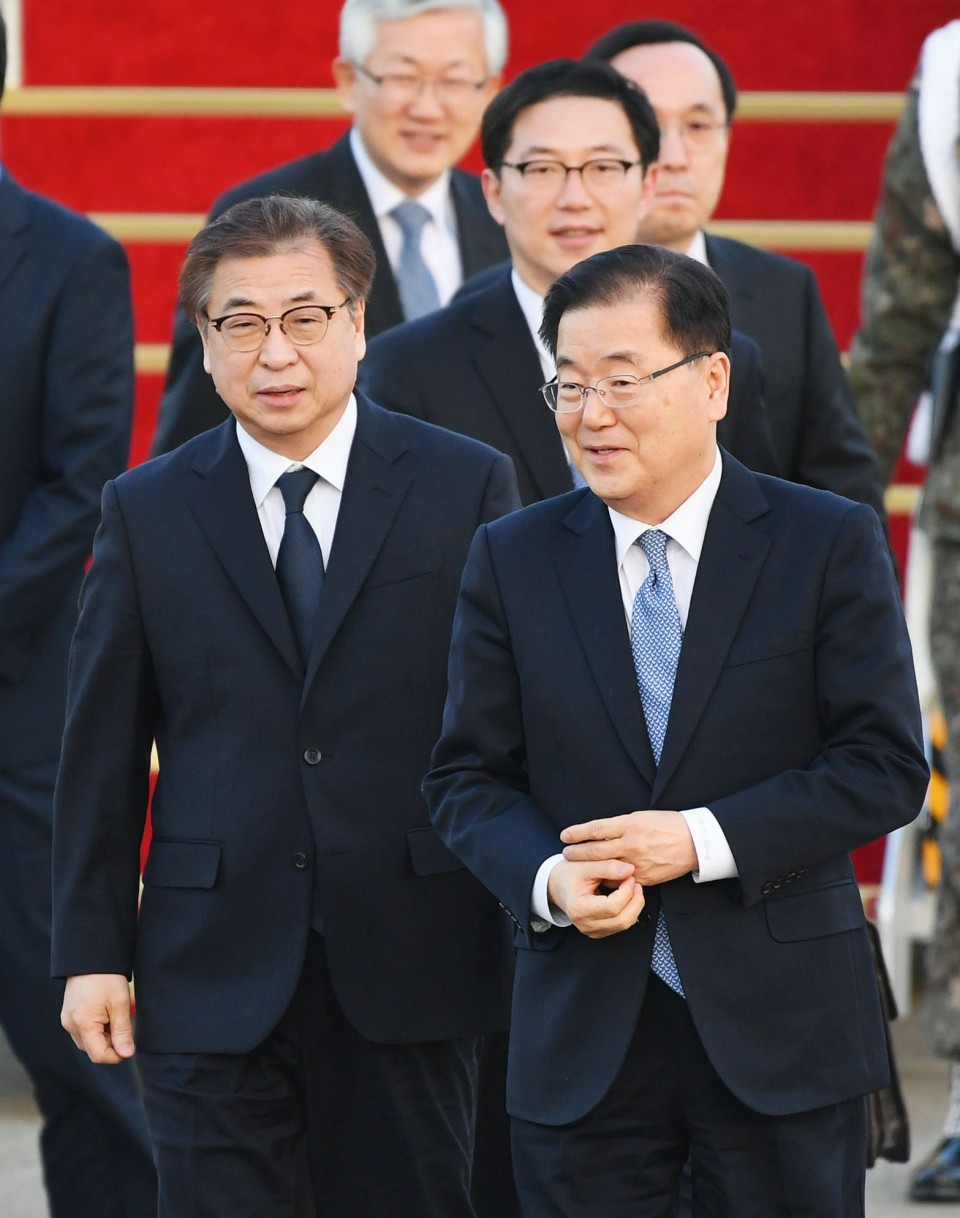 The envoys also include Suh Hoon, director of the National Intelligence Service. Suh, known as a specialist on North Korea, coordinated summits between the two Koreas in 2000 and 2007.

The envoys will visit the United States to explain the outcome of their trip to North Korea, the presidential office said.

All eyes are on how Trump's administration will respond to South Korea.

The delegation visited North Korea to reciprocate its dispatch of Kim Yo Jong, Kim Jong Un's younger sister and close aide, as part of Pyongyang's high-level delegation to the Pyeongchang Winter Olympics.

Kim Yo Jong and Kim Yong Chol, the head of the ruling party's United Front Department, who led a high-ranking North Korean delegation to the closing ceremony of the Olympics, also attended Monday's meeting, the news agency said.

Inter-Korean relations have been apparently improving after Pyongyang decided to join the Pyeongchang Olympics.