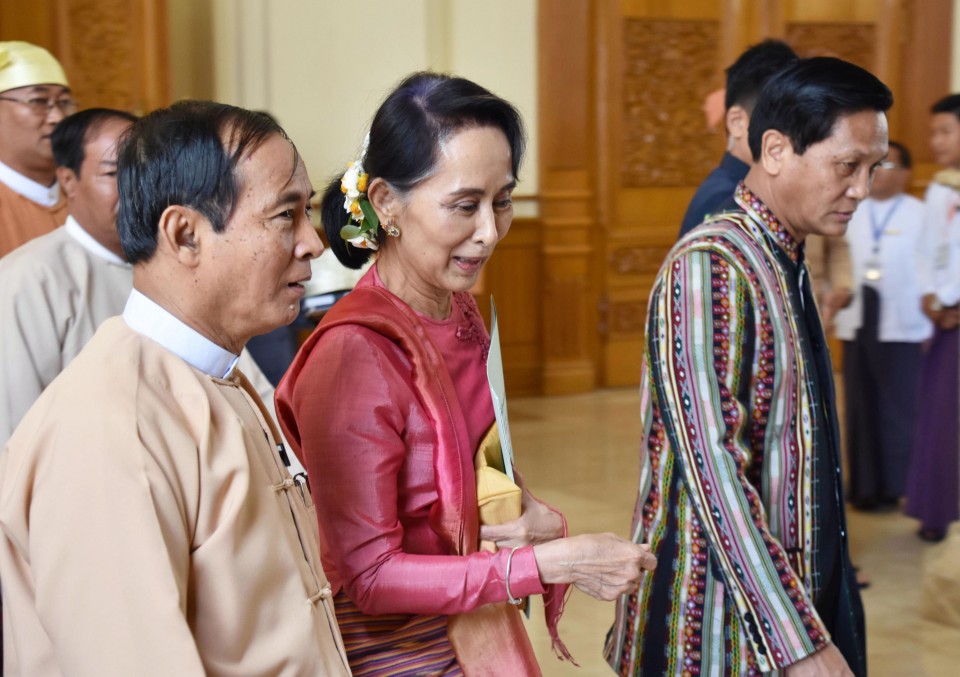 Win Myint collected 403 of the 636 votes cast by elected civilian members and appointed military members of both houses of parliament. The other contenders were Myint Swe of the military, and the upper house's Henry Vanthio.

Htin Kyaw's resignation is believed to have been prompted by ill health. But his wife has denied reports that his health was a factor, saying his departure was meant to make way for a more experienced and capable leader.

After the election result was announced, Win Myint vowed to work diligently for the people as the new president of Myanmar, which despite being resource rich is one of the poorest countries in Southeast Asia due to a half-century of misrule by military governments and rebellions against central government rule by its many ethnic minorities.

"I will try my best to fulfill my duty to the people," Win Myint told reporters as he waved his hands before rushing away from parliament by car.

Win Myint, a senior member of the ruling National League for Democracy party led by Suu Kyi, was the former speaker of the powerful lower house of parliament. He resigned that post on March 21, the same day Htin Kyaw resigned.

The lower house made him a vice president only on Monday, so that he could run in Wednesday's presidential election. Under Myanmar's constitution, only the country's vice presidents -- there are currently three, one appointed by the military members of parliament and the other two separately by the elected members of the upper and lower houses -- are eligible to run for president.

Win Myint has been a lawmaker of the lower house since 2012, and was appointed Speaker in February 2016.

Formerly a lawyer, Win Myint became a political prisoner for his role in a 1988 popular uprising against military rule. He later joined Suu Kyi's party and won a seat in the 1990 general election, whose results the military later nullified.

Although Win Myint now becomes the president, Suu Kyi is expected to continue to rule the country as the de-facto leader. But colleagues hope Win Myint's presidency will strengthen the Suu Kyi-led administration by dint of his vast political experience and strong character.

"He is a politician who had been involved (with democratic struggle) since the beginning. I believe and hope that he knows how to strategically maneuver and bring (democratic) changes," said Aung Kyi Nyunt, a senior executive of the ruling NLD.

The government led by Suu Kyi came to power after her party's sweeping victory in the 2015 elections, winning around 80 percent of the seats in both houses of parliament. But she was barred from becoming president by a constitutional provision drafted specifically against her, which prohibits a person with a foreign spouse or children with foreign nationality from becoming president.

Htin Kyaw, a close friend of Suu Kyi, was an academic, civil servant and writer who had never engaged in politics, but became president in March 2016 with her endorsement.

Myanmar was ruled by the military for decades until 2011, when it voluntarily stepped down after installing a quasi-civilian government led by former army generals.