Japan pulls out stops to improve nightlife for foreign tourists

Many foreign tourists to Japan often wonder why public transportation, especially in areas of Tokyo renowned for their nightlife, is so limited after the last trains of the night.

Now local officials are brainstorming for ideas to address this dissatisfaction and others among foreign tourists and boost their spending by encouraging more night outings to shows, restaurants and scenic spots in the country.

Toshima Ward centering on Ikebukuro, one of Tokyo's busiest hubs, recently came up with such ideas to enhance the appeal of its nightlife. It even launched a committee last December whose members, including TV personality Tomoe Shinohara, are considering various ideas for nightlife entertainment.

The ward is building an outdoor theater at a park near Ikebukuro Station to attract more visitors with artistic and cultural interests and is hoping to liven up the area so that people spend time and money there after the shows have ended.

"We want to realize the proposals, starting with those deemed most viable," said Toshima Ward mayor Yukio Takano.

According to Japan's Tourism Agency, a record 28.69 million foreigners visited Japan in 2017, with their total spending reaching an all-time high of 4.41 trillion yen ($41.8 billion).

But given a cooling off of Chinese tourists' shopping binges, once dubbed "bakugai" or "explosive shopping," spending per foreign traveler at about 150,000 yen is on the decline.

Tourists, especially from Europe and the United States who emphasize nighttime entertainment when traveling, complain that Japan's nightlife can be dull -- meaning there is a huge potential for promoting more spending by foreign travelers.

Club Piccadilly, which puts on Friday night shows featuring ninja dancers and performances of Japanese taiko drumming and electric shamisen instruments in Osaka's busy Umeda district, was one of those chosen and proved popular with foreign tourists. 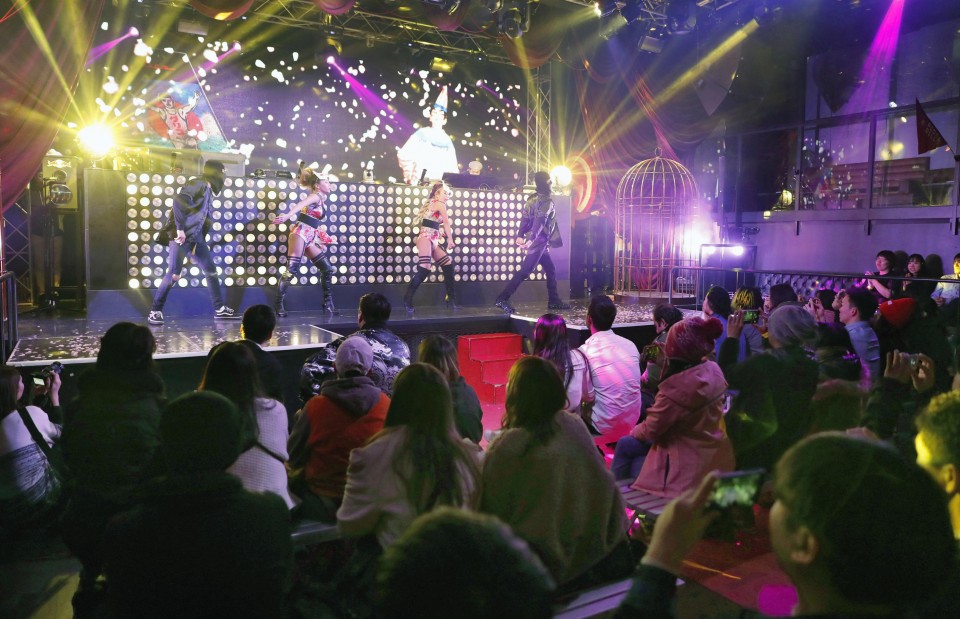 The annual festival commemorating the 1998 Nagano Olympics, which attracts hundreds of thousands of visitors in February, features crafted paper lanterns lining the streets and Zenkoji temple lit up in dazzling lights.

"If we can create opportunities to go out at night not only in big cities but also in places like ski and hot spring resorts, that could boost spending on food, beverages and other things," said an official of the agency.

Although the downtown areas of Shibuya and Ginza are bustling with shops and entertainment, the drawback is that Tokyo train and bus services end relatively early -- usually around midnight or a little later -- when the night is still young.

This leaves foreign revelers with few transportation options, either having to stay out and wait for their first train or pay for an expensive taxi ride back to their hotel.

This is in stark contrast to regional cities, such as Fukuoka, southwestern Japan, where the downtown areas are rather compact with shops and hotels all within walking distances of each other, which makes them even better potential hubs for nightlife activity.

In December, a group of lawmakers of the Liberal Democratic Party proposed carrying out test-run experiments to allow trains and buses to operate past midnight and into the early hours of the morning as a way of enhancing convenience for nightlife enjoyment.

Even so, it would be difficult to operate subways around the clock like those in New York City, the Tokyo metropolitan government-run subway operator suggested.

"It wouldn't be easy because we check train tracks and the overhead wires between the last train and the first train in the morning," said an official of the subway operator.

In Fukuoka, Fukuoka D.C., an association of industry, government and academia, is taking the lead in examining ways to stimulate the nighttime economy, and plans to take steps in earnest to that end from fiscal 2018.

"Our town is compact. Food stalls and hotels are all concentrated in the center of the town and this is our advantage that travelers don't have to worry about transportation after staying out late," said Shuhei Ishimaru, director general of the association.

"We want to create an environment where foreign travelers can enjoy their nightlife for many days without worry," he added.