Unbeaten yokozuna Kakuryu is primed to win his fourth makuuchi division championship after capturing an 11th straight victory with a massive effort Wednesday at the Spring Grand Sumo Tournament.

In one of his more challenging bouts of the 15-day competition so far, Kakuryu held fast against hulking komusubi Ichinojo to keep his perfect record and push his fellow Mongolian further down the ranks. 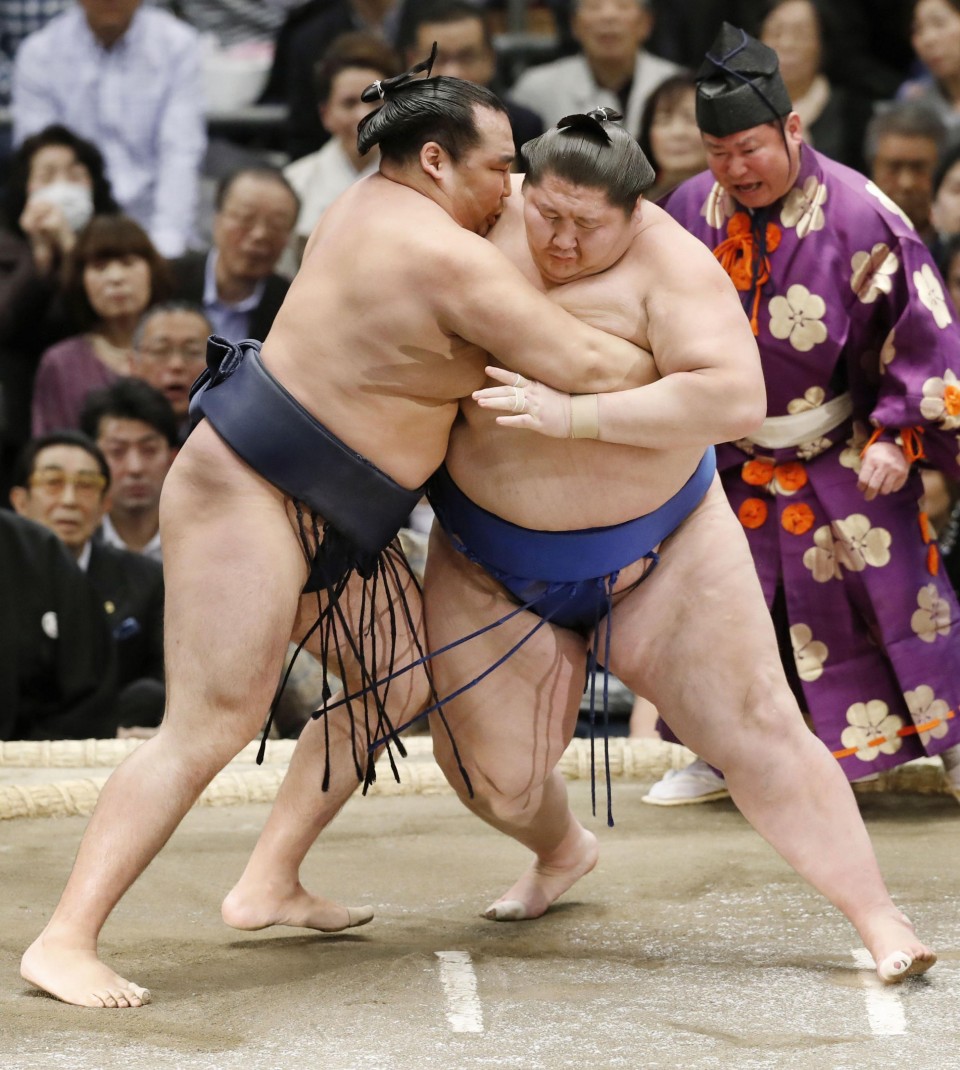 Ichinojo, whose 215-kilogram frame has helped him garner eight victories here, used his bulk to put the 155-kg yokozuna on the back foot as the two wrestlers quickly slumped together into a standstill.

But the lone grand champion at Edion Arena Osaka displayed his Herculean strength, resisting an attempt by Ichinojo to force him from the ring before pushing the colossal komusubi out.

After suffering his first defeat yesterday at the hands of Ichinojo, No. 6 Kaisei caught a lucky break and earned a default victory over Takakeisho (3-8) to stay within one win of Kakuryu.

The No. 3 maegashira, one of four wrestlers here to beat January's champion Tochinoshin, withdrew from the tournament after suffering a right foot injury in his bout with No. 6 Hokutofuji (5-6) on Tuesday.

In other matches, Takayasu escaped defeat at the hands of Tochinoshin (7-4) to earn his ninth victory and become the sole wrestler in third position.

After driving the Georgian to the edge of the ring with a vigorous charge, Takayasu was pulled down by Tochinoshin as the sekiwake leapt out to avoid defeat.

But after a meeting, the judges ruled Tochinoshin to have overstepped the straw bales prior to the ozeki's fall.

Goeido secured a winning record with a quick win against No. 4 Shodai. The Osaka-born ozeki stopped the charging No. 4 maegashira in his tracks and pushed his hopping opponent out for his eighth win.

Mitakeumi (5-6) suffered his fourth straight loss after being plowed out by No. 5 Chiyomaru (5-6). The sekiwake had the 193-kg maegashira on the ropes twice before a 30-second rest gave Chiyomaru enough energy to slide Mitakeumi over the straw.

Chiyotairyu fell to his ninth loss against No. 2 Arawashi (2-9) when the komusubi lost his footing as his slapping charge was deflected by the Mongolian.

Among the rank-and-file wrestlers here, No. 11 Yutakayama, Osaka natives No. 13 Daishomaru and No. 14 Ikioi, and Bulgarian No. 17 Aoiyama are all still in contention after earning their eighth wins.