Telework evolving in Japan on efforts to cover communication drawbacks

Teleworking, a key part of the government's "work style reform" initiative, is slowly evolving in Japan as a result of efforts to make up for the lack of communication among workers.

Use of an "avatar robot" to smooth communication between office and workers at home has drawn attention as one of such efforts. With a number of companies trying to adopt various working styles under the initiative, there is even a company for which all the employees are working remotely. 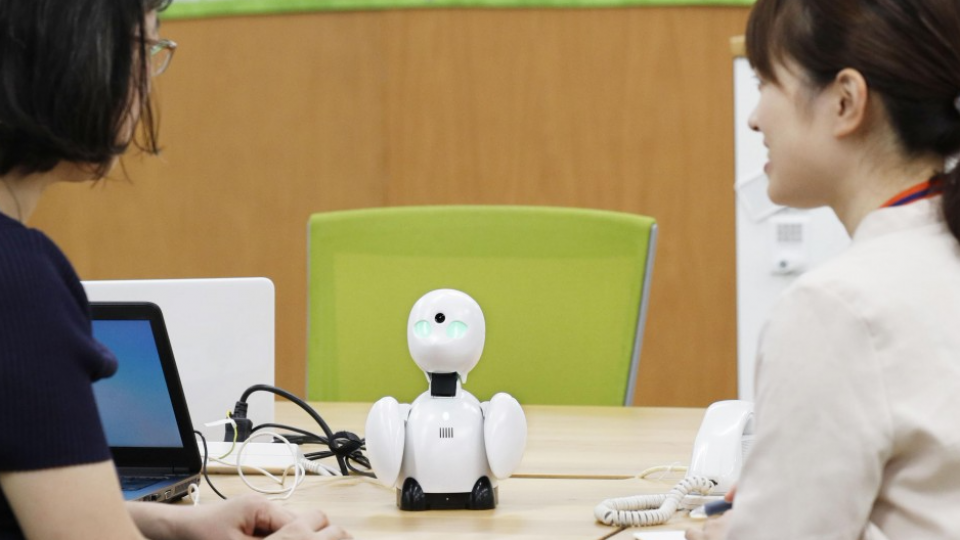 Workers at home can view their office and co-workers via OriHime. The roughly 20-centimeter-tall robot verbally communicates with co-workers and attends meetings on behalf of a remote employee as colleagues can carry the handy avatar when necessary.

"I can feel the atmosphere in the office and it's like I'm there," said a teleworker in his 40s.

The Internal Affairs and Communications Ministry's survey found only 13.3 percent of companies in Japan had introduced teleworking as of the end of September 2016 while another 3.3 percent were planning to do so.

Of the companies without teleworking, 11.3 percent cited communication difficulties as the reason, while an overwhelming 74.2 percent said it is because they have no work that suits teleworking, according to the survey released in June 2017.

The ministry said, however, companies with teleworking were 1.6 times more labor productive than firms not using it.

The government is promoting the work style reform drive to boost Japan's productivity and competitiveness amid rapid aging and population decrease, by curbing long working hours and encouraging more women to work, while trying to push legislation to overhaul Japan's wage system.

The adoption of teleworking is said to be an important tool of the reform because it would relieve workers from commuting and allow them to spend more time with their family.

Unilever Japan K.K. introduced a system in July 2016 allowing employees to choose work places and hours on their own.

The system has allowed employees to avoid taking rush-hour trains. It also helps them avoid living apart from their spouses due to work.

Mie Takao, 29, is one of them. She teleworks for a Tokyo office from the home of her husband in Nagoya, central Japan.

"There's no problem because I can participate in meetings via computer and I have come to work more efficiently," Takao said.

Yuka Shimada, an executive at the Japanese unit of the British-Dutch consumer goods company, said employees say the system has helped them become "more positive toward their work."

"We have changed our mindset to help employees enrich their life," she said.

Tokyo-based software developer SonicGarden Inc., where all the employees are teleworking, has made a virtual office where the workers' images taken by cameras attached to their computers are displayed on the computer screen.

The virtual office gives the workers "a sense of belonging because we feel as if we are in the same workplace," said Yoshihito Kuranuki, president of the company.

Junichi Ito, a 40-year-old SonicGarden employee who works at his home in Nishiwaki, Hyogo Prefecture, said, "I chat with my colleagues on the screen and so feel no disadvantage."

Before moving to SonicGarden, Ito spent two and a half hours a day commuting. He can now spend time with his family and has even become the head of the parents and teachers association for his child's school.

"I unknowingly worked too much but cannot return to the past life," Ito said.

Tetsuji Okazaki, an economic history professor at the University of Tokyo, said, "Except for places like factories, teleworking is likely to increase."

"Before the industrial revolution, even in the manufacturing industry many workers worked at home under the guidance of wholesalers. We are witnessing a move to return to the previous way of working."

Noting that improvement in telecommunication and other systems is indispensable for teleworkers to work under the same conditions as in the office, Okazaki said the cost of the improvement would be an issue for companies planning to adopt teleworking.