2018 has begun. This is the year of the Pyeongchang Winter Olympics and Paralympics, as well as the football World Cup finals in Russia. As is a common custom before major games or challenges in Japan, both athletes and fans alike are heading to sports-related Shinto shrines to say their prayers. Here is an introduction to some of those shrines located in Kyoto.
Martial arts - Hachidai Jinja
Visitors to the shrine are greeted by a bronze statue of the master swordsman Miyamoto Musashi, who is said to have visited the shrine before a series of noted duels against members of the Yoshioka school of swordsmanship.
"Musashi came here because he wanted something to rely on, but he left without offering a prayer and went straight to the place of his duel, saying, 'I revere the gods and buddhas and ask them for nothing'," explained senior priest Masahiro Takeuchi, 42. 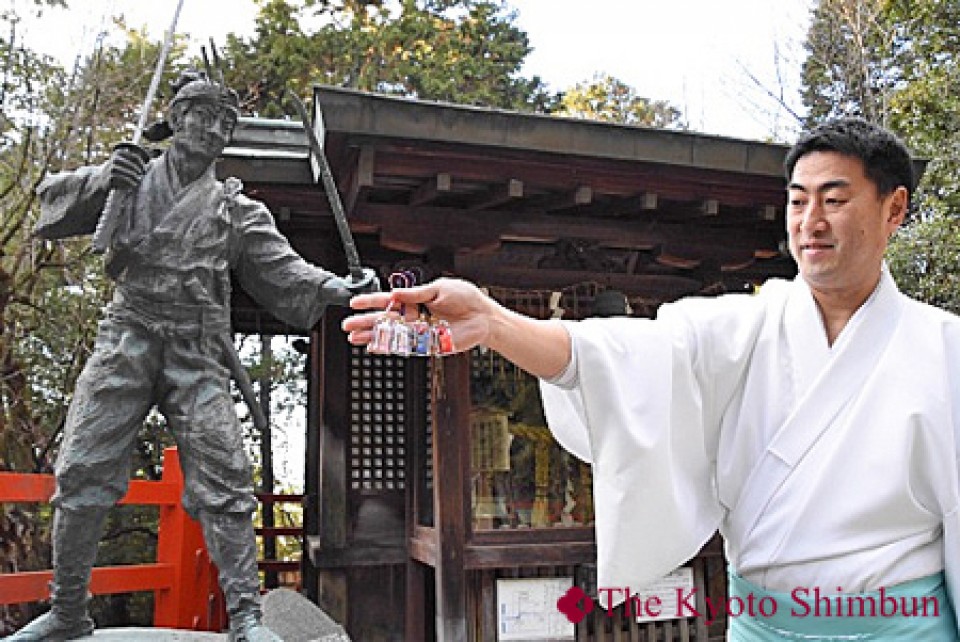 This particular duel took place by a cedar tree about 200 meters west of Hachidai Shrine. Since Musashi's time, five trees have stood there. The earliest was enshrined as a sacred tree within the shrine's grounds. For the past 30 years, small fragments of the tree, called "Kachimamori" (Victory charms), have been given out to parishioners in the belief they will bring victory and good fortune. People involved in all types of sports, not only martial arts, offer prayers at the shrine.
Every year on Jan. 5, elementary and middle school-aged students of a local school of kendo, or Japanese-style fencing, visit the shrine and pray to improve their skills. "I want to become strong like Miyamoto Musashi. I want to do my very best at fencing practice so I can achieve my goal," said Seiya Okuda, 12, a sixth-grade student at Shugakuin Daini Elementary School, of his prayer.
Leg strength - Goou Jinja Shinto Shrine 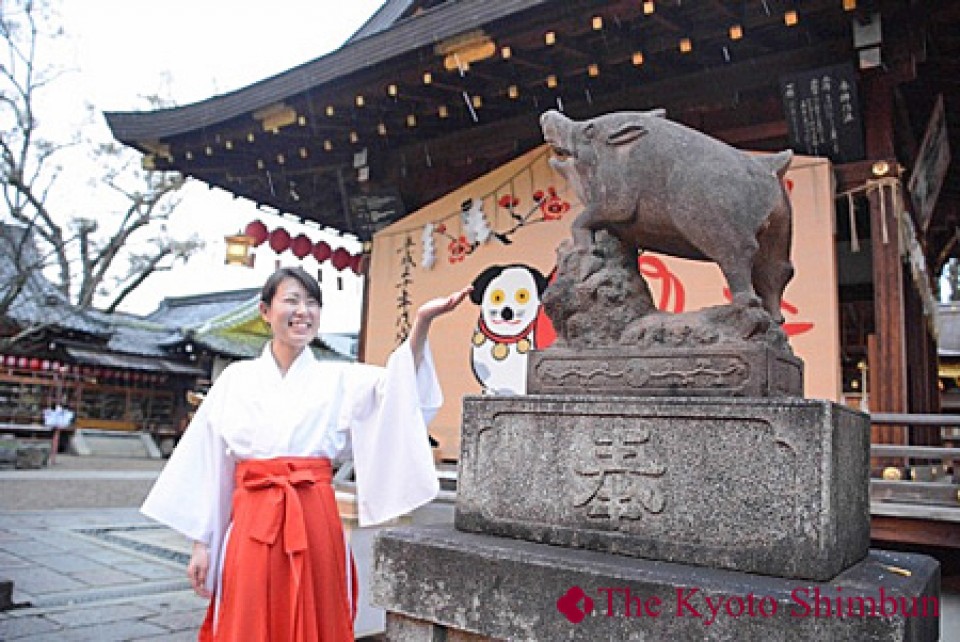 Athletes visit this shrine, said to be home to gods that protect one's legs and lower back, to pray for recovery from lower-body injuries. Wake no Kiyomaro (733-799), a member of a noble family, is said to be enshrined here as a statue of an inoshishi, or Japanese wild boar. Wake no Kiyomaro's legs were injured during a journey but it is said that the inoshishi protected and cured him.
Runners and spectators visited the shrine when the annual high school "ekiden" long-distance relay race began in December in Kyoto. Yukiko Osawa, 53, from Tokyo, visited to pray for her son, who was a substitute runner for Kokugakuin Kugayama High School and had sustained an injury to his leg. "I want to rely on the gods (of this shrine)," she said.
The fans of top Japanese figure skaters Satoko Miyahara, from Kyoto, and Yuzuru Hanyu have also visited the shrine, leaving behind written prayers for success. According to senior priest Takahiro Hongo, 46, the number of visiting fans grew after 2007, which was the zodiac Year of the Boar. Hongo said he senses that word about the shrine "is spreading online."
Horse Racing and Dressage - Fujinomori Jinja
Some knowledge of Japanese is required to appreciate the connection between Fujinomori Shrine and sports, since it comes from a play on words. On May 5, an annual festival is held at the shrine featuring seasonal flowers, including Japanese irises. The Japanese word for "iris" is "shobu," while the word for "battle" or "game" sounds the same despite being spelled with different Chinese kanji characters, leading to the trend of athletes coming to this shrine to pray for victory prior to a big match.
Visits by those involved with horse racing are characteristic of the shrine. Trick riding is performed in Kakeuma shrine rituals before a crowd at the annual Fujinomori Festival. The turning point occurred roughly 40 years ago when a parishioner asked if it was possible to offer a victory prayer for horseracing, and the shrine began handing out votive "ema" pictures of racehorses.
Before the big race at the Kyoto Racecourse, horse riders and owners can be seen making prayers at the shrine. In the fall when many Grade I races take place, the shrine is said to be bustling with horse racing fans.
The number of people involved with dressage who visit the shrine to pray for the safety of the horses has also grown, chief priest Nobumasa Fujimori, 53, said. "For horseback riders, horses are important partners. I believe they think of their horses in the same way they think of themselves," he said.
Ballgames - Shiramine Jinguh
Known for possessing "the ballgame gods," offerings of balls from official soccer teams, professional baseball, sepak takraw or kick volleyball and more abound at the shrine.
What has garnered the respect of those involved in ball-type sports is the shrine's deep connection with "kemari," a type of football played in ancient Japan. Located on the remains of the estate of the Asukai family, the head of which was a prominent figure in kemari and traditional "waka" poetry, it is said that the family's guardian deity seidaimyoujin is enshrined there.
Visitors are expected to increase in number this summer as Japan's team plays in the soccer World Cup in Russia. "It seems like it is becoming a place where athletes can reflect on themselves," said Yuko Kitamura, 30, a priest of the shrine. 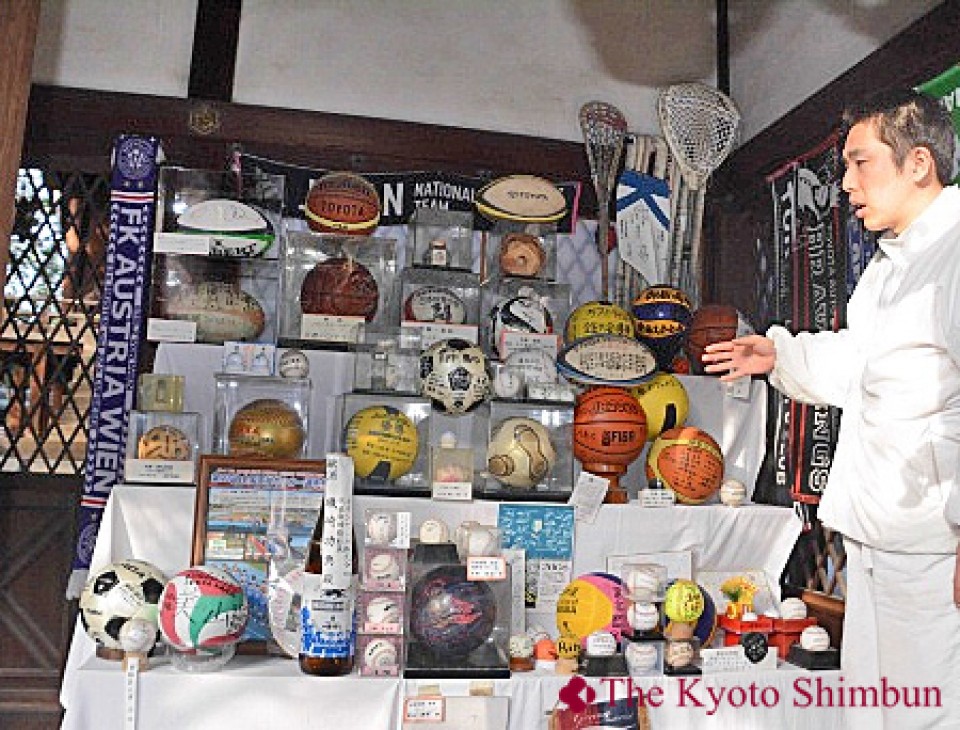 Visitors who are not connected to ball games can be seen praying at the shrine as well. Figure skater Miyahara visited last summer at a time when she was recovering from an injury, and it is said that she prayed for her victory in figure skating. "She prayed that the results of her practice would show," Kitamura said.
Athletics and Soccer- - Kotari Jinja
It is said that Kotari Jinja originated as a small shrine built by Emperor Kanmu after he dreamt that a god's feet landed on the ground in that spot in the 8th or early 9th century.
Because of its association with "the feet of a god," every year regular visitors give lucky charms from the shrine to the Kyoto team in the national women's ekiden race. "This tradition has continued for at least 20 years," senior priest Mitsukazu Yoshino, 70 said.
Tradition and word-of-mouth have garnered attention for the guardian deities said to inhabit the shrine. The number of visitors involved in athletics and soccer is growing, with even the coach of a J-1 League soccer club visiting in February 2017. "It was just by chance," said a modest Yoshino when asked about the club's top ranking last season.
"It is important to make an effort. I would be glad if people visited with the hope of receiving help from the gods in the end," said Yoshino.
The Kyoto Shimbun