Japan has conveyed its concern to the U.S. government that a statement made by Secretary of State Rex Tillerson could contradict an agreement with South Korea over "comfort women," sources close to the matter said Saturday.

Tokyo has told Washington that Tillerson's words could give the impression that the U.S. government has expressed understanding of South Korea's stance. The U.S. side replied that it will take note of Japan's position, the sources said.

"It's one that only they can resolve," Tillerson told reporters this month after a 20-nation ministerial meeting in Vancouver, Canada. "And we know that there's more that needs to be done," he said, referring to the issue between the key U.S. allies of Korean women forced into Japan's wartime military brothels. 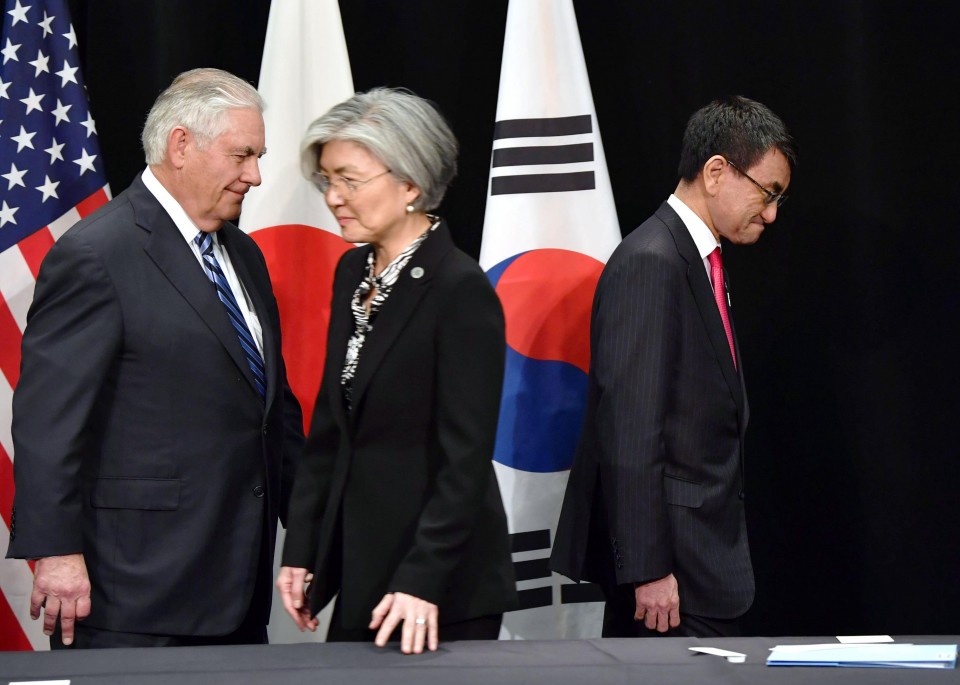 The statement comes as South Korea has recently reignited tension with Japan by requesting that the Japanese government take additional measures for former comfort women despite a 2015 bilateral agreement to "finally and irreversibly" resolve the protracted row. Tokyo has rejected the request.

The U.S. government sees the need for strengthened ties between Japan and South Korea in the face of the rising threat posed by North Korea's development of nuclear weapons and ballistic missiles.

Tokyo has said it will work together with the United States and increase pressure on North Korea to the "maximum level." But Tillerson's statement raises a question of how close Tokyo and Washington are on the history-related issue, clouding Japan-South Korea-U.S. relations to deal with the North.

The Japanese government had viewed that the United States acknowledged the deal was the final solution to the "comfort women" issue after former Secretary of State John Kerry said in a statement following the agreement in 2015 that it clarified the two countries will finally and irreversibly resolve the matter.

Following Tillerson's statement, Chief Cabinet Secretary Yoshihide Suga said at a press conference last week that the United States is "supporting the Japan-South Korean deal with consistency" and that Washington has not changed its view.