Yokozuna duo Hakuho and Kisenosato were both ousted for the second consecutive day, falling to their respective opponents in defeats at the New Year Grand Sumo Tournament on Wednesday.

There were shocks all around as first Kisenosato, the sole Japanese grand champion, was dismissed to a third loss with another weak display at the hands of former ozeki Kotoshogiku, while Hakuho fluffed his lines in the day's final match against upstart Yoshikaze.

Yokozuna Kakuryu, who like Kisenosato has missed the last four meets through injury, leads a group of five wrestlers in the early lead with spotless 4-0 records at Ryogoku Kokugikan.

Hakuho (2-2), who suffered his first defeat by big man Ichinojo on Tuesday, was quickly slapped down by Yoshikaze after losing his footing in the second biggest upset of the tournament. The Oguruma stable wrestler earned his seventh "kinboshi" victory and his third win in 18 matchups against the Mongolian champion after he sent Hakuho flailing over the edge at the 2017 November meet. 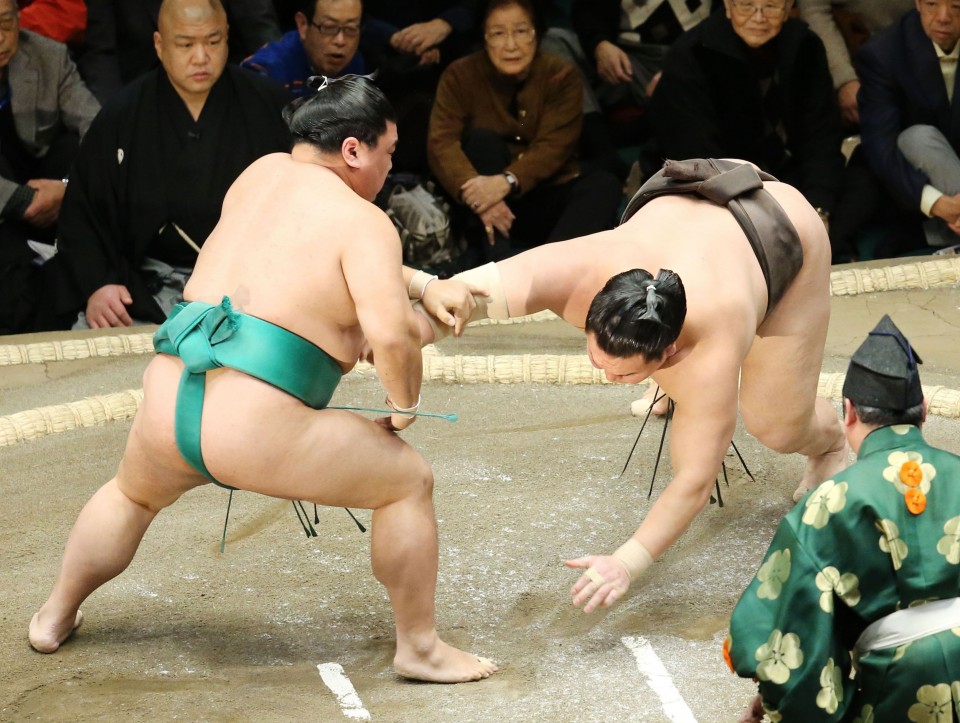 Despite a 60-kilogram weight disadvantage, Kakuryu made quick work of fellow Mongolian and No. 1 maegashira Ichinojo (1-3) with a frontal force out and continued his strong injury comeback.

Struggling yokozuna Kisenosato suffered another defeat when Kotoshogiku, now a No. 2 maegashira, thrust him down over his side for his first win here.

Third-ranked maegashira Tochinoshin (4-0) ended ozeki Takayasu's (3-1) perfect record, after the Georgia-born wrestler relentlessly pushed and slapped his opponents around the ring, finally pulling him back towards the edge and executing a thrust down.

Ozeki Goeido collided with top-ranked maegashira Hokutofuji (1-3) and captured his fourth victory after lifting the Hakkaku stable wrestler up by his belt and sending him crashing into the ringside seats.

Sekiwake Mitakeumi also stayed undefeated after unleashing an onslaught of pushes and slaps to komusubi Takakeisho (2-2) and forcing him to his knees with a pull down.