U.S. Ambassador to the United Nations Nikki Haley said Tuesday her country will never accept a nuclear-armed North Korea just a day after Pyongyang said it could be open to participating in the upcoming Winter Olympics in South Korea.

"The civilized world must remain united and vigilant against the rogue state's development of a nuclear arsenal," she told reporters at her first press conference of 2018. "We will never accept a nuclear North Korea." 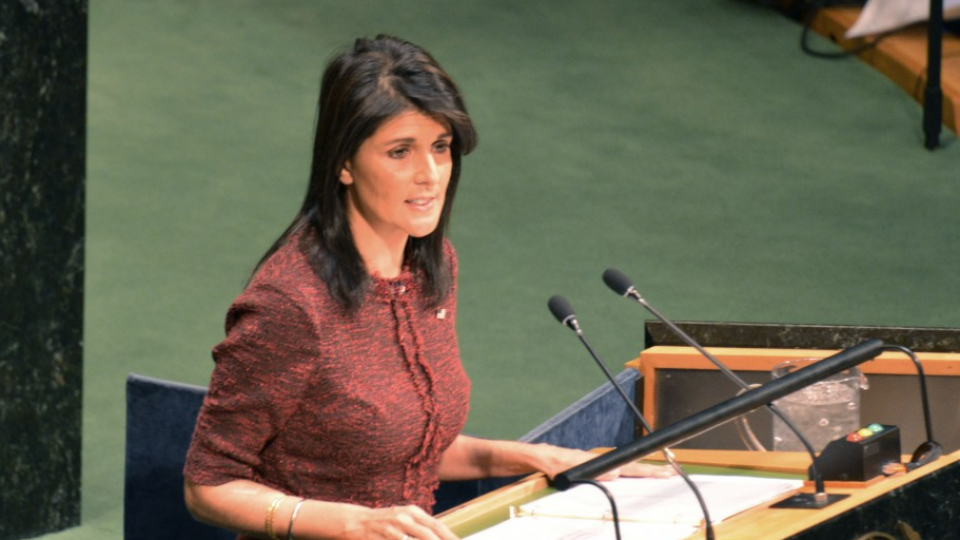 The unstable situation on the Korean Peninsula remains troubling. Over the last year North Korea was subject to three Security Council resolutions imposing sanctions for detonating its sixth and most powerful nuclear test as well as a spate of ballistic missile tests showing signs of advanced technology.

Despite this, North Korean leader Kim Jong Un said Monday his country is open to talks with South Korea about its possible participation in the Pyeongchang Olympics in February, raising some hopes for better relations.

The olive branch, extended in Kim's nationally televised New Year's address, was the first time North Korea had expressed a willingness to take part in the games. They are to be held Feb. 9-25 in the ski resort mountain town and coastal city of Gangneung, not far from the demilitarized zone separating the two Koreas.

That announcement prompted Unification Minister Cho Myoung Gyon to propose that the two sides meet in the heavily fortified truce village of Panmunjeom on Jan. 9.

"North Korea can talk with anyone they want, but the U.S. is not going to recognize it or acknowledge it until they agree to ban the nuclear weapons that they have," Haley said.

Also describing the regime's actions as "reckless" she added that "we need to have them stop nuclear weapons and they need to stop it now."

"We are very skeptical of Kim Jong Un's sincerity in sitting down and having talks," she said at a press briefing.

Nauert said the United States will not oppose possible talks between the two Koreas, but that Kim's overture may be an attempt to "drive a wedge" between Washington and Seoul.

"Kim Jong Un may be trying to drive a wedge of some sort between the two nations," Nauert said. "I can assure you, that that will not happen."

The United States has "a very strong relationship" with South Korea and Japan, its key allies in Asia, she said.

The U.S. policy toward North Korea has not changed, Nauert said, vowing to impose "maximum pressure" on the Kim leadership with other countries so as to compel it to engage in credible talks for denuclearization.

During his annual address, Kim also claimed that his country's nuclear ambitions were complete and that a nuclear launch button is "always on the desk in my office."

Pyongyang has continuously defended its right to maintain its nuclear weapons as a means of protecting itself from the United States. It sees Washington as a threat, and especially objects to the annual military drills that it jointly conducts with South Korea, which typically increase tensions in the region.

Kim and U.S. President Donald Trump have verbally sparred with one another using heated rhetoric that has unsettled many around the globe.