Japan stepped up criticism against the U.S. forces on Wednesday after a third forced landing by a military helicopter in the southern island prefecture of Okinawa this month, with Okinawa Gov. Takeshi Onaga calling the military "crazy" and "out of control."

"Indeed, the whole U.S. military is going crazy," Onaga said, borrowing the words of Lt. Gen. Lawrence Nicholson, the top commander of U.S. military forces in Okinawa, who was quoted by prefectural officials as having called the situation "crazy" after the second incident took place.

Prime Minister Shinzo Abe said in parliament he "takes seriously the feelings of the people in Okinawa" as concerns simmered in the prefecture hosting the bulk of U.S. military facilities in Japan. "Ensuring the safety of locals will be a top priority issue which Japan and the United States will work on," he said.

Defense Minister Itsunori Onodera told reporters in Tokyo he has seen "too many" incidents involving U.S. military aircraft in Okinawa.

He also said he asked the United States to thoroughly inspect all American military aircraft in Japan and suspend flights of AH-1 attack helicopters at U.S. Marine Corps Air Station Futenma, given that the latest incident involved one of them. 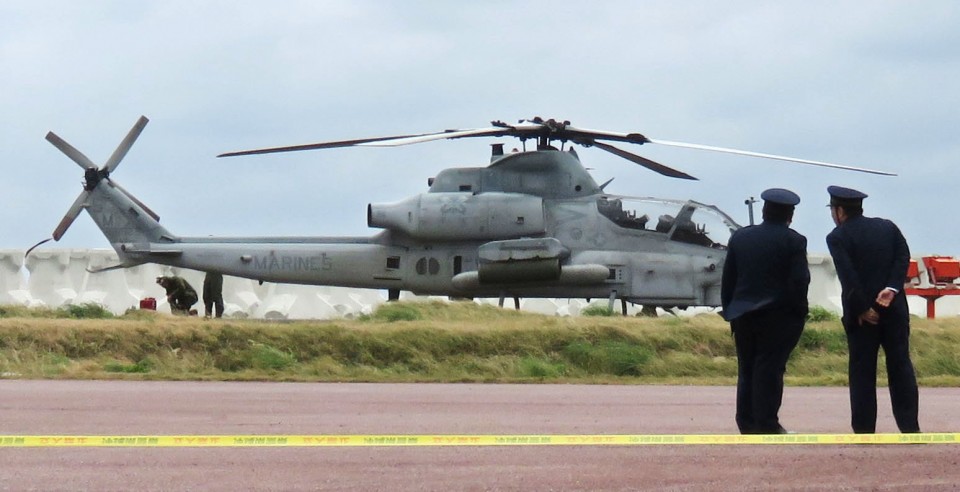 At about 8 p.m. Tuesday, the AH-1 made what the U.S. military called a precautionary landing at a civilian heliport on tiny Tonaki Island west of Okinawa's main island. The aircraft's two crew members were unhurt, according to local police.

Earlier in the month, an AH-1 also belonging to the Futenma base landed at a waste disposal site in the village of Yomitan, just two days after a UH-1 helicopter was grounded on a beach on Ikei Island. The landings were conducted to avoid accidents, the U.S. military told Japanese authorities.

The Okinawa prefectural government has also been frustrated over what it views as insufficient action on the part of the central government to make the United States take effective steps to prevent further incidents from occurring.

The Japanese government has "no ability to act as a party in charge," Onaga said.

Even after the Japanese defense chief asked that all AH-1 helicopters at the Futenma base remain grounded, one of them was seen taking off Wednesday afternoon, according to a central government source.

The AH-1 helicopter involved in the latest incident departed Tonaki Island at around 10:50 a.m. Wednesday and arrived at Kadena Air Base about 30 minutes later.

Ginowan Mayor Atsushi Sakima, representing the municipality hosting the Futenma base, directly lodged a protest with Col. Darin Clarke, who manages the Marines' government and external affairs in the Pacific.

Clark expressed an apology for stirring concerns among local residents and promised to carry out a thorough investigation, according to Sakima.

Foreign Minister Taro Kono told U.S. Ambassador to Japan William Hagerty over the phone that the frequency of incidents is extremely regrettable and requested sweeping action to prevent such issues from recurring, according to the Foreign Ministry.

In December, a window fell from a CH-53E large transport helicopter into the grounds of an elementary school located just outside the Futenma base.