Prime Minister Shinzo Abe said Wednesday he will attend the opening ceremony of the Pyeongchang Winter Olympics in South Korea next month, ending uncertainty over his attendance amid an ongoing bilateral feud over "comfort women" who were forced to work in Japan's wartime military brothels.

Abe also expressed readiness to hold talks with South Korean President Moon Jae In, telling reporters that he would "clearly state Japan's stance" on a bilateral agreement reached in 2015 to settle the comfort women issue.

South Korea's presidential office said it "welcomes" Japan's plan and will closely cooperate to realize a successful visit by Abe.

Abe's announcement that he will attend the Feb. 9 ceremony comes after Moon urged Japan earlier this month to apologize anew to the women and their families, although Tokyo and Seoul had agreed the landmark deal would resolve the issue "finally and irreversibly." 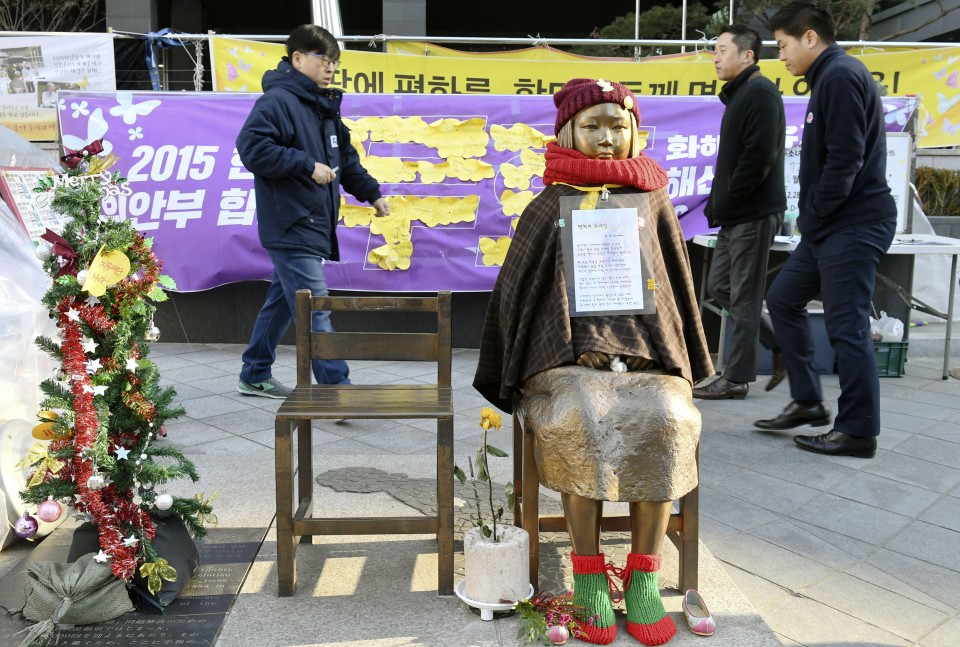 Abe also said he wants to tell Moon of the need to cooperate bilaterally as well as trilaterally with the United States to maintain increased pressure on North Korea over its nuclear weapons and missile development.

Later Wednesday, the prime minister told a Diet session, "I will tell (Moon) in person we should not deviate from the policy to maximize pressure on North Korea."

He will also seek to reaffirm such a stance with U.S. Vice President Mike Pence during their planned meeting in Tokyo. Pence is expected to stop in Japan before heading to Pyeongchang, where he will lead the U.S. delegation.

Chief Cabinet Secretary Yoshihide Suga told a press conference that the prime minister's decision reflected his desire to cooperate for the success of a "festival for peace and sports" that will be held in the same Asian region as Tokyo, which will host the Summer Olympics and Paralympics in 2020.

The comfort women issue has been a longstanding source of diplomatic tension between the two countries, as many of the women forced to serve in Japan's wartime military brothels were from the Korean Peninsula.

In the leaders' meeting that Tokyo is arranging with Seoul, Abe is expected to demand South Korea remove a statue symbolizing the comfort women in front of the Japanese Embassy in the South Korean capital, according to a government source.

Under the 2015 deal, Japan apologized and expressed remorse to the former comfort women for their suffering and provided 1 billion yen ($9 million) to a South Korean foundation to support surviving victims. South Korea in return agreed to "make efforts" to remove the statue.

However, South Korea on Jan. 9 unveiled a new policy on the bilateral accord, struck between the Abe government and the administration of Moon's predecessor Park Geun Hye. Although Seoul said it will not seek to renegotiate the agreement with Japan, it wants Tokyo to do more for the former comfort women.

Signs of easing tension have emerged on the Korean Peninsula after the North decided to join the Olympics. Given the current positive mood for inter-Korean dialogue, Abe plans to tell Moon that the success of the international sports events and security issues should be separated, the source said.

The prime minister will also seek cooperation from Moon to realize a trilateral summit with China at an early date, the source added.

Abe had held off confirming whether he would attend the opening ceremony, saying he would decide after examining the Diet schedule. The 150-day ordinary parliament session convened Monday.

The ruling bloc of Abe's Liberal Democratic Party and its junior coalition partner the Komeito party will prepare for the prime minister's trip by arranging the Diet schedule with opposition parties.

But Abe's decision also sparked an outcry from some LDP lawmakers. "It will be hard to win public support" for the move, said a lawmaker who participated in a party meeting held in the morning.

Another participant said Abe's planned attendance "could send the wrong message that Japan is not sticking to the implementation of the (2015) agreement."