400 passengers stranded on train amid heavy snow in northern Japan

Around 430 passengers were forced to stay the night aboard a local train stranded since Thursday evening amid heavy snowfall in Niigata Prefecture on the Sea of Japan coast.

According to rescue workers, five of the passengers -- a man in his 40s and four women in their teens and 20s -- felt unwell and the man was taken to a hospital. The train resumed service Friday morning about 15 hours after it became stranded, with many passengers exhausted after standing all night in crowded cars.

More than half of the passengers on the four-car train on East Japan Railway Co.'s Shinetsu Line evacuated earlier in the morning with their relatives coming to pick them up by car.

The operator said the interior lighting and heating systems had worked properly and it had distributed water and nutrition bars, but the train only had one toilet requiring people to wait in long queues and the toilet paper ran out, according to passengers. Some said passengers took turns sitting on seats.

"I was standing and looking down the entire time," said a woman who came out of the train around 4:40 a.m. when her family arrived. "I just want to sleep," said a male passenger.

A 50-year-old man who came to pick up his daughter vented his anger against JR East, saying, "Tomorrow, she will sit for university entrance exams so I want her to rest as soon as possible. The operator kept saying the train would start moving, but it was wrong."

The train bound for Nagaoka from Niigata became stranded at around 6:55 p.m. Thursday at a rail crossing between Tokoji and Obiori stations in the city of Sanjo, where snowfall reached 77 centimeters around that time.

Due to delays and cancelations of train services caused by the snow, the train was crowded at the time. JR initially said 600 people were stranded but later lowered the figure. 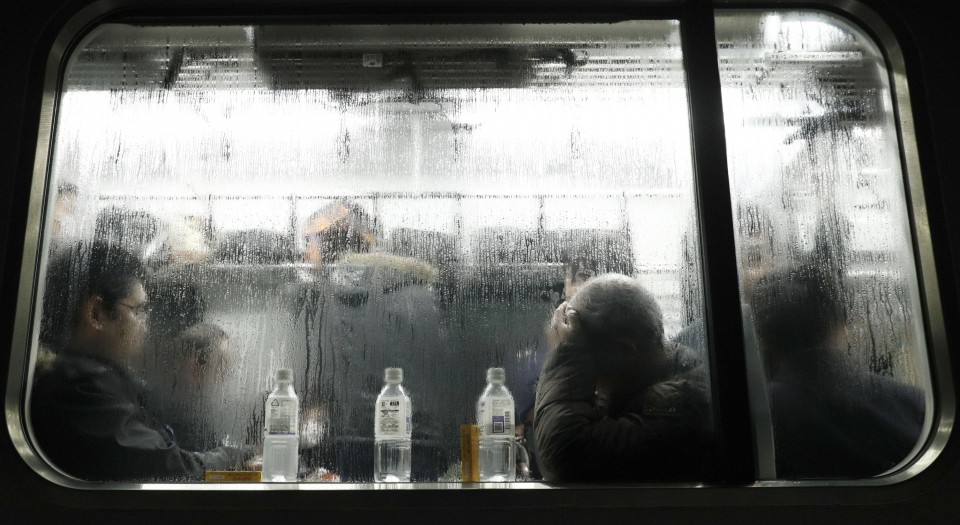 The operator did not let the passengers leave the train overnight, saying it was dangerous to go outside given the heavy snowfall. "We put priority on safety," said a JR East official.

Transport minister Keiichi Ishii said he had instructed the operator to investigate why it took so long to help the passengers and resume the train service.

The company said it considered arranging alternative transportation for the passengers but gave up after bus operators said the snow would likely prevent them from approaching the train. JR East also said it thought using taxis and other vehicles to transport hundreds of passengers would be too time-consuming.

There were no snowplows operating near the site Thursday evening and one snow remover only arrived at the site around 9:30 a.m. Friday.

Heavy snowfall also left around 300 vehicles stranded near two exits on the Banetsu Expressway in the Niigata town of Aga on Thursday evening, but they were all able to leave after about 12 hours following snow removal work.

Another 410 vehicles were temporarily stuck on the Hokuriku Expressway in Toyama and Ishikawa prefectures. There have been no reports of injuries or people falling ill, according to local authorities.