U.S. choppers fly over Okinawa school despite promise to avoid it: Japan

The U.S. Marine Corps flew helicopters above an elementary school next to a U.S. air base in Okinawa on Thursday despite promising Japan it would try to avoid such flights after a window from a CH-53E chopper fell on the school grounds last month, the Japanese Defense Ministry said.

But the allegation was denied by the Marines, saying its helicopters did not fly over the Futenma No. 2 Elementary School. The Japanese ministry, in a bid to prove the credibility of its claim, released video footage it says shows three U.S. helicopters flying over the school that afternoon.

The Defense Ministry lodged a protest with the U.S. military. Shortly before the helicopters' over-flight, students were on the playground taking part in an evacuation drill in response to the falling window incident on Dec. 13.

"It's deplorable that this has happened even though we're strongly demanding that the U.S. side not fly above the school," Chief Cabinet Secretary Yoshihide Suga said at a press conference in Tokyo.

According to the ministry's local bureau, two AH-1 attack helicopters and one UH-1 multipurpose helicopter were noticed by security cameras and bureau officials who have been sent to the school since the December incident to watch for any U.S. military aircraft flying over the school.

Responding to questions by media outlets, however, the U.S. Marine Corps said in a written statement: "Pilots from today's flights were aware of the school's location and avoided it, and Marine Corps Air Station Futenma confirmed using radar tracking data and pilot interviews that no Marine Corps aircraft flew over the school today."

"The Marine Corps is extremely sensitive to local citizens' concerns regarding overflight of" the school, it said. 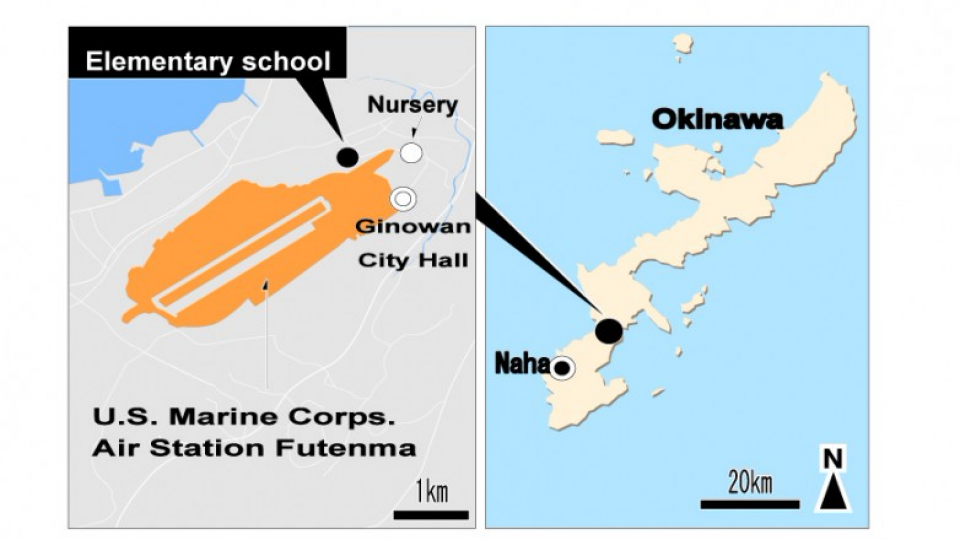 The education board of Ginowan, the city where Air Station Futenma is located, called the situation "outrageous" and demanded the U.S. military "keep its promise" to avoid flying over the school.

Local concerns have been deepening over continuing accidents and mishaps involving U.S. aircraft in the southern Japanese island prefecture, where the bulk of U.S. military forces in Japan are stationed.

Nobody was injured in the December incident involving the CH-53E based at Futenma, but locals were shocked as the window, weighing 7.7 kilograms, landed only a dozen meters from where more than 50 children were taking part in physical education classes.

The U.S. Marine Corps in Okinawa resumed flights of CH-53Es less than a week after the incident. But it said it instructed all crew aboard aircraft taking off and landing at the Futenma air base to avoid flying over schools to the "greatest extent possible," according to the ministry. 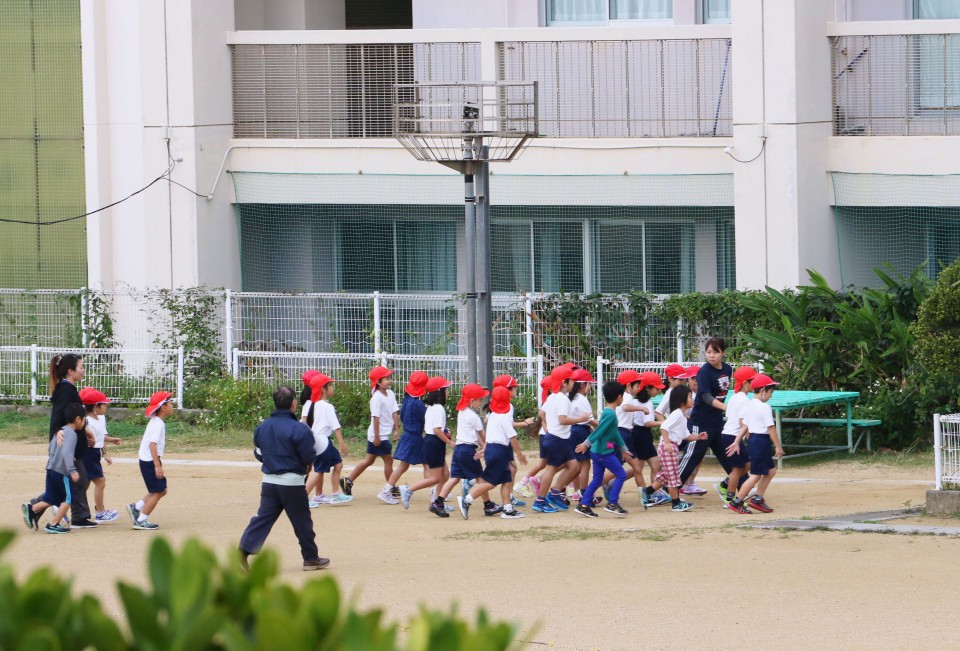 The elementary school has not used the playground for classes since the incident.

During Thursday's drill, students evacuated to school buildings from the playground as directed by teachers and Okinawa Defense Bureau officials.