South Korean President Moon Jae In said Wednesday that Japan needs to sincerely apologize to "comfort women" forced to work in Japanese wartime military brothels if the long-standing bilateral issue is to be resolved.

Moon told a press conference that it is "undeniable" that a deal struck with Japan in 2015 to resolve the comfort women issue "finally and irreversibly" is an official agreement between the two countries.

However, referring to aspects of the agreement he considers seriously flawed, he said, "A knot wrongly tied should be untied."

The president's remarks come a day after the government announced it would not seek to renegotiate the deal, reached under the previous administration of President Park Geun Hye, but that it wants Japan to do more to settle the issue, a call swiftly rejected by Tokyo.

"Japan should accept the truth, apologize with a sincere heart and take (the comfort women issue) as a lesson and work with the international community in such a way that (such things) could not occur again," Moon said.

A real settlement would come if the victims can forgive, after Japan makes a sincere apology and take other actions, Moon said. 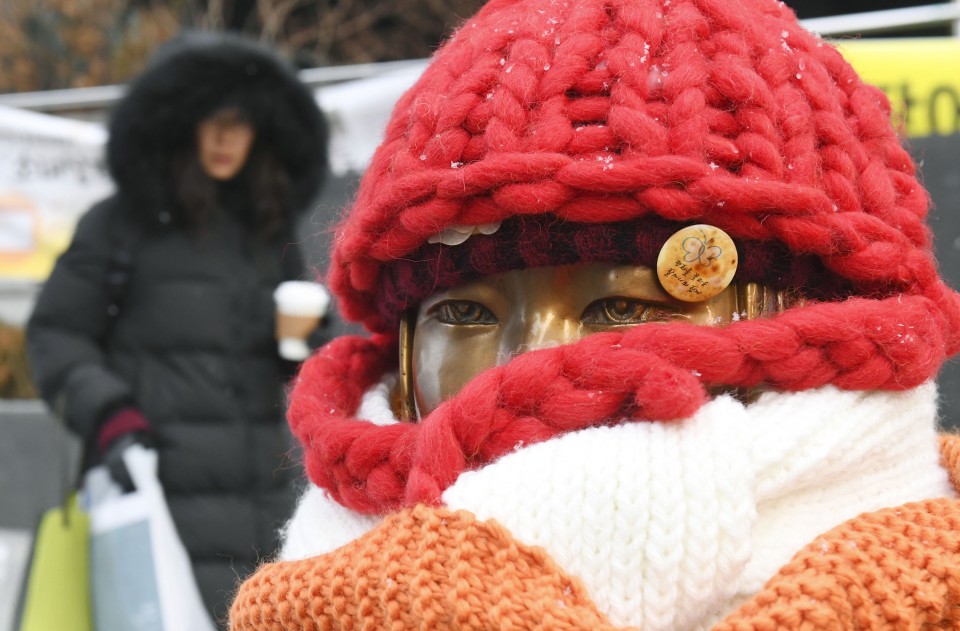 Still, Moon said South Korea will try to separate historical issues from efforts to develop future-oriented cooperation with Tokyo. "It's very important to maintain good relations with Japan," he said.

At the same time, Moon said his government would continue taking measures to heal the psychological wounds of the victims so as to restore their honor and dignity.

The dispute over comfort women -- a euphemism used to refer to women mostly from Asian countries who worked in brothels built to provide sex to Japanese soldiers during World War II -- has been one of the major issues that have strained ties between Tokyo and Seoul for years.

Under the 2015 deal, Japan apologized and expressed remorse to former comfort women for their sufferings and provided 1 billion yen ($8.8 million) to a South Korean foundation to support surviving victims.

South Korea in return agreed to "make efforts" to remove a statue symbolizing comfort women from in front of the Japanese Embassy in Seoul. That bronze, life-size statue, of a girl in traditional Korean dress remains in place.

The deal, however, has proven controversial among the victims and the South Korean public who felt the victims' voices were ignored, and that Japan's fresh apology over the issue was inadequate.

With some of the victims calling for the money to be returned, South Korea said Tuesday it will set up its own fund of an equal amount and negotiate with Tokyo on what to do with the Japanese contribution.

In Wednesday's press conference, Moon said, "If the money could be spent for the good purpose of resolving the comfort women issue, and Japan, the victims and civic organizations agree to it, I think it is desirable."

"I will take a bit more time in conducting talks with Japan, the victims and related organizations," he added.

In Tokyo, Chief Cabinet Secretary Yoshihide Suga rejected Moon's call for Tokyo to do more to settle the comfort women issue, saying Tokyo "cannot accept at all" such a demand by South Korea.

Given that both countries had agreed to settle the issue "finally and irreversibly" in December 2015, Suga said the two countries are supposed to steadily implement that deal.

Later Tokyo lodged a formal protest with Seoul, with a senior Foreign Ministry official phoning a senior official of the South Korean Embassy in Tokyo.