In his policy speech on the first day of the regular session, Abe also expressed a desire to improve bilateral ties with China, while stressing Japan's commitment to standing firm against North Korea's nuclear weapons and missile development ambitions.

Labor reform and free education, both promised by his ruling Liberal Democratic Party during the campaign for the House of Representatives election last October, were also key issues in his address. 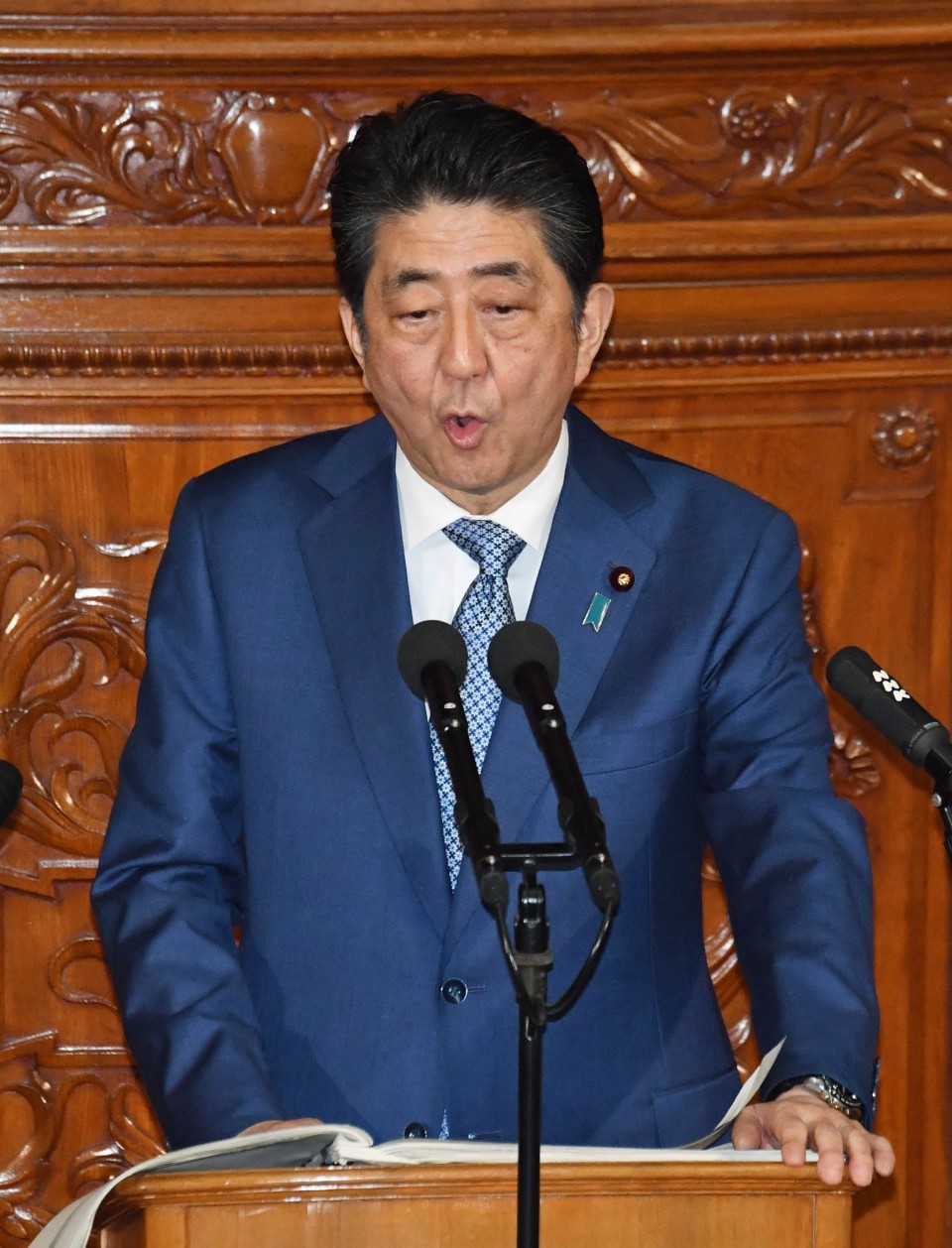 Abe, who doubles as the LDP president, told a party meeting in the morning that constitutional amendment is the party's platform since its establishment in 1955. "It is high time for us to realize it. Let us fulfill our responsibility," he said.

In his Diet address, the prime minister said, "We will be creating our nation, looking ahead 50 years or 100 years. It is the Constitution that narrates the shape and ideal form" of the country.

He urged political parties to put forward concrete plans and advance debate to move toward realizing a first-ever amendment to the Constitution, which took effect in 1947.

LDP Secretary General Toshihiro Nikai said Saturday the party could present its amendment proposal in March at its convention, saying, "It is an option to put it forth in the form of an interim report."

Constitutional amendments require the support of at least two-thirds of lawmakers in both the upper and lower houses and approval by a majority of voters in a national referendum.

As this year marks the 40th anniversary of the signing of a peace and friendship treaty between Japan and China, Abe vowed to realize reciprocal visits by him and Chinese President Xi Jinping "as soon as possible" and to host a trilateral summit also involving South Korea.

Describing the two neighboring Asian countries as "inseparable," Abe said Japan "will seek to meet the expectations of the international community by developing friendly relations (with China) in a stable manner."

On the security front, Abe pledged to bolster Japan's defense capability, including the introduction of the land-based Aegis Ashore missile defense system, and review its defense program guidelines as the country faces the threat of North Korea's nuclear and missile ambitions.

"It is no exaggeration to say that we are facing the severest security environment in the postwar era," Abe said, referring to the North Korean crisis. He vowed to advance "resolute diplomacy" in order to get Pyongyang to change its policies.

Spurred by an increase in defense spending as well as ballooning welfare costs, the draft budget for fiscal 2018 hit a record-high 97.71 trillion yen ($883 billion). The government is seeking early passage of the annual budget and an extra 2.71 trillion yen supplementary budget for this fiscal year through March.

The premier, meanwhile, reiterated Japan's readiness to push ahead with his "Free and Open Indo-Pacific Strategy," which pursues stability and prosperity on the basis of an international rules-based order in the region. The strategy is seen as aimed at addressing China's maritime assertiveness.

Saying he has forged a relationship of personal trust with U.S. President Donald Trump over the past year, Abe said the Japan-U.S. alliance has been and will be the linchpin of Tokyo's foreign and security policy.

The premier said he will aim to deepen cooperative relations with South Korea for a new era, but did not call the country "our most important neighbor," the phrase he used last year.

South Korean President Moon Jae In earlier this month urged Tokyo to make a fresh apology to former "comfort women" forced to work in Japan's wartime military brothels after the two countries agreed in 2015 to settle the issue "finally and irreversibly." The issue has long been a source of bilateral friction.

Turning to domestic issues, Abe promised to carry out labor reforms to boost Japan's workforce and overcome the country's declining birthrate and aging society, which he called a "national crisis."

The government plans to submit a labor reform-related bill including imposing a binding cap on long working hours, eliminating the gap between regular and nonregular employees, and introducing a merit-based pay system for well-paid highly skilled workers.

But opposition parties have criticized the last proposal, which would allow firms to exempt skilled workers with high incomes from work-hour regulations, describing the bill as a "zero overtime pay bill." They say it would result in overwork.

Using revenues from a consumption tax increase planned in October next year, the prime minister also vowed to reform Japan's social security system into one that is oriented to all generations, including effectively free preschool education.

The government plans to submit a total of 64 bills to the session through June 20, including ones to regulate passive smoking and to introduce Japan's proposed casinos to operate as "integrated resorts."