Once in a while, a maverick who is eager to blaze a trail comes along in the entertainment world.

Tokyo- and Chicago-based stand-up comedian Saku Yanagawa considers himself just that -- a world-traveling comic who delivers his unique, biting perspective shaped by life lived in Japan.

In a country where "the nail that sticks out gets hammered down" and political satire and commentary, especially on Japanese TV and in the mainstream media, are often frowned upon, Yanagawa is quick with the quip.

"Did I tell you the one about Prime Minister Shinzo Abe?" he asked in English in a recent interview. "He opened up a fried chicken restaurant in Tokyo, but it only serves right wing."

Hailing from Nara Prefecture, probably better known for stags than gags, the 25-year-old Yanagawa got his start in comedy in 2014 through a TV show about Japanese stand-up Rio Koike, a.k.a. "Jimmy T," who made his own mark on the New York comedy scene.

"I thought, 'Wow, he's cool. I want to do that. So I looked for him on Facebook. I found him, messaged him and went to New York the next day," Yanagawa said of Koike who has now returned to Japan to write a book about how to master English.

As a boy, Yanagawa aspired to be a pro baseball player but damaged his arm playing shortstop. He jokes he did not make it big because his need for Tommy John surgery went undiagnosed.

While studying at Osaka University, where he earned a bachelor's degree in literature specializing in theater and music, Yanagawa went to the Big Apple to meet Koike, his eventual mentor, who spent several years there.

"I went to all the comedy clubs in Manhattan and talked to the owners and told them I want to get a spot. I told them I'll wash dishes and clean the floors (if I have to)."

Since then, Yanagawa has been on a mission to perform regularly, settling into the comedy scene in Chicago, the backdrop for the iconic 1980 film "The Blues Brothers," which became a formative creative influence on him as a teenager.

"When I was 18 years old I watched The Blues Brothers with John Belushi and Dan Aykroyd...That's the reason I went to Chicago actually, and I like the Chicago Cubs," he said. 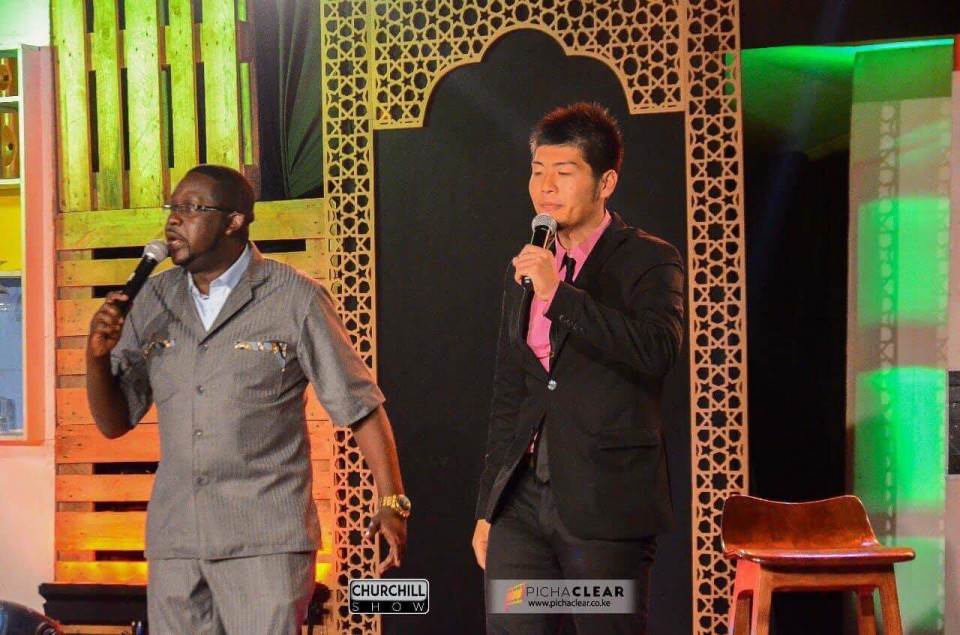 The way sharp wit can be a useful tool in life was apparent to him from an early age, Yanagawa says, drawing him to comedy where wisecracks are weaponized.

"Without using gadgets or props you can make people all over the world laugh. Since I was a kid, I really loved comedy. For example, I fell in love with the "Ace Ventura" movie with Jim Carrey."

Yanagawa said in order to get his shot in Chicago he had to convince club owners to take a chance. He has since had stage-time at famous locales like Laugh Factory, The Second City and Zanies Comedy Club.

"First I had to do open mics...(Club owners) would watch my sets and say, 'Wow you're funny. Where are you from?' I told them I'm from Japan but I came to the States by myself and they started to respect me and would ask me to perform. Every day, they would hold open mics at more than 10 comedy clubs, that's why Chicago is a brilliant city."

In November, Yanagawa took his talents to Africa for two weeks, performing in Kenya, Rwanda, Uganda. He was invited as one of the headliners in the Kigali International Comedy Festival and appeared on Kenya's "Churchill Show," which is broadcast nationally and hosted by comedian Daniel "Churchill" Ndambuki.

He appeared in Rwanda's first ever comedy festival after a Kenyan comedian whom he met in Japan hooked him up with the organizers.

"I really wanted the challenge to see if my comedy would work in Africa," he said, adding that he was also searching for a place to perform outside of the United States and Japan.

The Churchill Show, filmed in Nairobi is considered one of the most high-profile TV programs in East Africa, but even a show of that status was apparently not prepared for a Japanese guest, much to Yanagawa's amusement.

"The (makeup) artist opened like eight different makeup foundations but all of them were really dark. She tried the lightest one but it still looked like blackface (to me)...I said I can't do that, I won't be allowed back to the States. So I went out without any makeup."

In the routine which can be viewed on YouTube, Yanagawa reeled off joke after joke, referring to local customs and culture while also using his self-deprecating shtick.

"The host, Churchill, was called the grandfather of comedy in Africa, and I was really nervous. The director told me, don't use this joke because it's TV or don't use (the f-word), so I had to rewrite all my material."

Foreign audiences are completely different from those in Japan, he said, but that's what keeps Yanagawa on his toes -- sometimes literally -- especially when a joke bombs.

"When I performed in Texas in 2015 I made a joke about George W. Bush and a guy in front threw a Heineken bottle at me. That was scary, but I really wanted to try the joke," he said, adding that "the bottle smashed (on a wall) just like the ones thrown at the Blues Brothers in the movie."

He says the most challenging aspect of doing comedy in a language other than his mother tongue is being able to ad-lib, especially when dealing with often rowdy hecklers.

"We face off mentally. If something unexpected happens you have to take control and say something witty," he said, adding he might tell a heckler to "Speak into my Siri, so I can understand you" or "Text me after the show and I'll text you back."

Yanagawa, who performed 89 shows in 28 cities across five countries in 2017, also does a two-hour stand-up show each month called "Saku's Comedy Night" in Nakano, an edgy suburb of Tokyo. He models the show on sketches he has seen on "Saturday Night Live" -- a program on which he aspires one day to be a regular.

"When you watch Japanese comedy shows on TV you can't find any that include "seiji fushi," or political satire. That's what I want to do, humor that is more profound."

Some experts argue that political satire has been discouraged in Japan since the Edo period (1603-1867) with restrictions levied further after World War II, largely due to pressure from government and the country's conservative elite.

Yanagawa seemingly agrees, saying he thinks Japanese TV is too restrictive for him.

"Even in daily conversation people don't talk about politics in Japan. They think it's taboo. I love Japanese comedy too, but most is based on our daily lives. The comedy is different since Japanese come from a 'murashakai' (village society)" mentality, he said.

Ultimately, Yanagawa wants to perfect jokes about other cultures, giving him a path to his goal of being the first Japanese regular on SNL. He draws perspective from how many Japanese baseball players have made it big in the majors, but says as a comedian he must take a route outside Japan.

"SNL is like the MLB for me. If a Japanese player wants to play in the MLB they have to be famous and successful in Japan first. But in comedy that never happens. You have to go to the States, start playing in the minor leagues and get respect from other players (comedians)...then Double-A, Triple-A, and then MLB (SNL). That's why I have to move to the States soon."