The following are some questions and answers regarding the issues pertaining to Japanese Emperor Akihito's abdication on April 30, 2019, which was agreed upon by a special panel meeting Friday.

Q: Why is the emperor abdicating?

A: In August 2016, the emperor, who will turn 84 on Dec. 23, signaled his desire to abdicate in a rare video message, citing his advanced age and weakening health. As the existing law at the time had no provision on abdication, the government enacted in June a one-off law to allow him to step down.

Q: Who will succeed the emperor after he abdicates?

A: The emperor's eldest son, 57-year-old Crown Prince Naruhito, will succeed the Chrysanthemum throne. The Imperial House Law stipulates that only males born to the male lineage of the imperial family can ascend the throne. 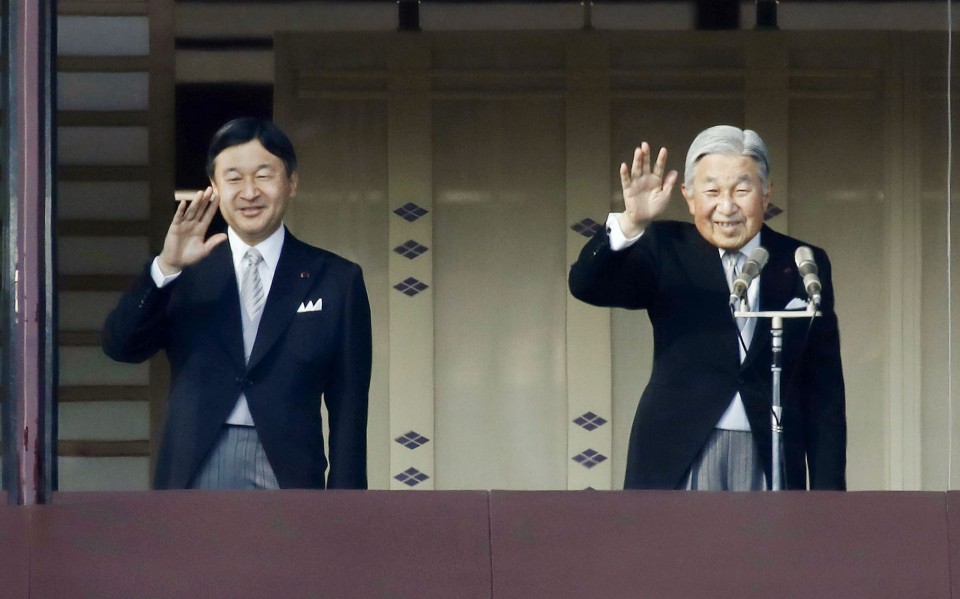 A: The government initially leaned toward setting the date in December 2018 but the proposal met opposition from the Imperial Household Agency as ceremonies to mark the imperial succession would coincide with important year-end and New Year events. An idea of setting the abdication on March 31, 2019, was floated as well, but met obstacles as the timing would overlap with unified local elections held once every four years.

Q: What is the emperor expected to do after abdication?

A: The emperor will be called "joko," a Japanese abbreviation of "daijo tenno" (retired sovereign), a title given in the past to an emperor who abdicated. He is expected to move to the Togu residence in Tokyo's Akasaka Estate. State acts to be performed by the emperor under Japan's Constitution, such as convening the Diet, and other official duties including meetings with foreign heads of state will be carried out by his son. The emperor is expected to have more opportunities to go out and personally meet his acquaintances.

Q: When the next emperor accedes the throne, will it mean the current Heisei era will end?

A: Yes. In modern Japan, an era name is used for the length of an emperor's reign. The Heisei era, meaning "achieving peace," began on Jan. 8, 1989, the day after Emperor Showa, the father of the current emperor, passed away. The government is expected to announce the name of the new era sometime in 2018 to allow preparation, as it is widely used in the country for calendars and other official documents. The new era will start on May 1, 2019, when the crown prince succeeds the throne.

Q: What procedures or ceremonies are expected for the emperor's abdication?

A: Following Friday's Imperial House Council meeting, the abdication is expected to be officially approved at a Cabinet meeting on or around Dec. 8. The Imperial House Law stipulates that when the throne is succeeded, a ceremony of accession shall be held. The last enthronement ceremony, in November 1990, was attended by more than 2,000 guests including foreign heads of state. The Imperial Household Agency is also preparing for an abdication ceremony although there is no legal provision for it.

Q: Is this the first time an emperor is abdicating in Japan?

A: Of the 125 emperors, including ones whose existence is disputed, in the world's oldest hereditary monarchy believed to stretch back more than 2,600 years, about half abdicated. The last to do so was Emperor Kokaku (1771-1840) in 1817 during the late Edo period.

Q: Are there any problems associated with the emperor's abdication?