Sunwolves coach Jamie Joseph announced Monday a squad of 26 players for the 2018 Super Rugby season, adding that the team had set themselves the goal of a top-five finish.

"The slogan 'Top 5 in 2018' reflects our goals and aspirations for next season," said Joseph, who doubles up as both Sunwolves and Japan national team coach.

Japan captain Michael Leitch is one of 12 players new to the franchise, and Joseph said more would be added to the squad in due course, primarily from the Brave Blossoms set-up.

"Because of the unusual contracting model in Japan, some of the players we are trying to approach are company employees. That has led to a delay in naming players. Those named today are predominantly professional rugby players so they are a lot easier to contract." 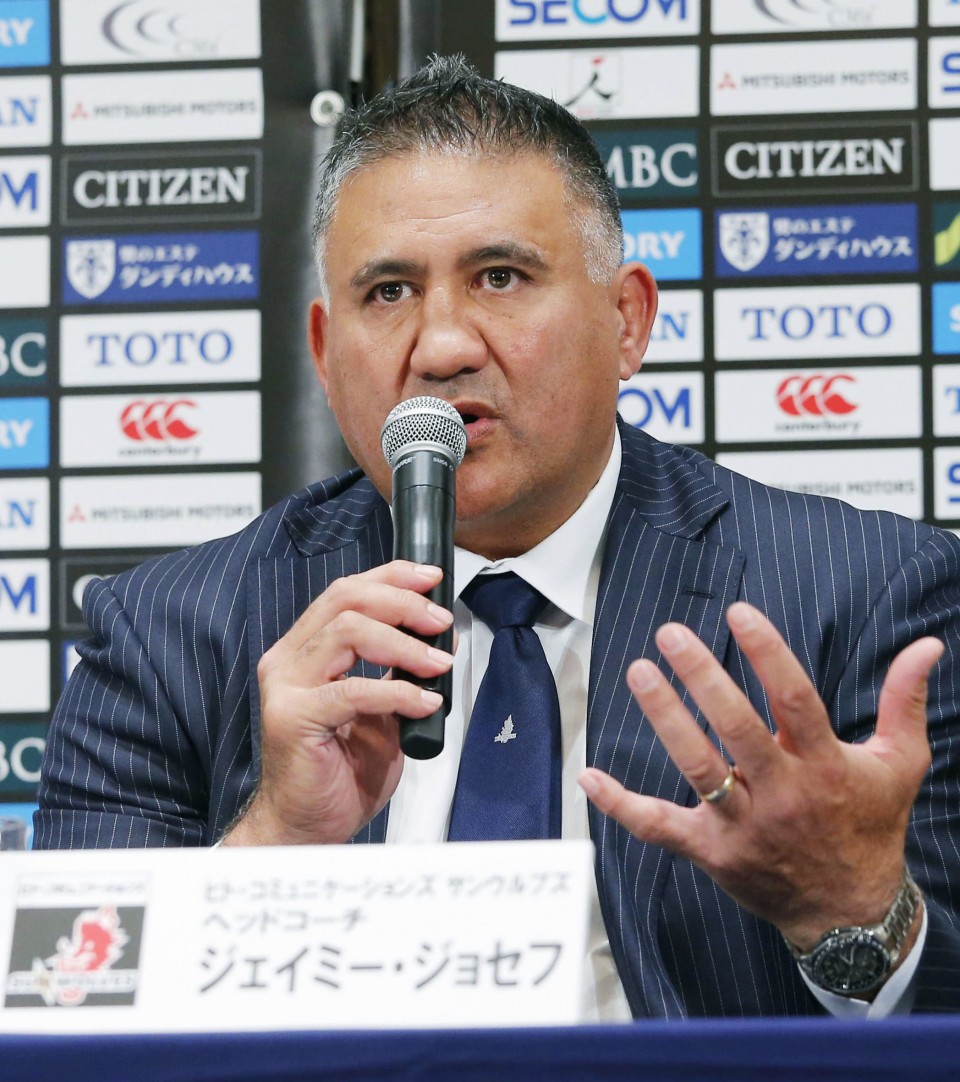 While most of the new players are familiar faces to Top League fans, Georgia hooker Jaba Bregvadze is one of four new front-row forwards.

"One of our biggest work-ons is the set piece so it's great we have the leader of the Georgian scrum and line-out, as we know how strong they are," Joseph said of the 30-year-old Bregvadze, who has played professionally in England and France.

Japan internationals Asaeli Ai Valu, Kazuki Himeno, Wimpie van der Walt and Lomano Lava Lemeki are included in the squad for the first time as Joseph looks to use the franchise to develop the Brave Blossoms ahead of the 2019 Rugby World Cup.

"There will be total consistency in the way Japan and the Sunwolves play," Joseph said. Though he did add, the two teams were different entities in different competitions and as such would have slightly different cultures.

All of the new players will be eligible for Japan at RWC 2019 with the exception of Bregvadze, Millar and Parker.

"One of my dreams is to play at a World Cup for Japan," said South African-born Willie Britz, who returns for a second season. "Playing for the Sunwolves is a big honor and a chance to prove myself, add value to the team and grow toward the goal of playing at the World Cup in 2019."

Joseph's team -- who are now in the five-team Australian Conference, having spent the last two years in the South African Conference with very limited success -- open their season on Feb. 24 against the Canberra-based Brumbies at Prince Chichibu Memorial Rugby Ground, having gathered on Jan. 28 for the start of their preseason.

"It's important the players get a couple of weeks off after the Top League finishes to freshen up as much as they can," said Joseph, who is the Sunwolves' third head coach in as many years.

The team are now scheduled to play five home games in Tokyo, two in Singapore and one at a venue to be arranged. However, informed sources have told Kyodo News that is likely to change with Hong Kong set to host one game and Tokyo likely to get a sixth.

"I am very excited to be head coach and can't wait to get into it," said Joseph, who led the Highlanders to the Super Rugby crown in 2015.