All U.S. service members in Japan have been prohibited from drinking alcohol on or off base in the wake of an alleged drunk-driving accident involving a Marine Corps member in Okinawa, the U.S. forces in Japan said Monday.

The accident on Sunday that killed a 61-year-old Okinawa resident is another in a long list of incidents involving service people on the island prefecture that hosts the bulk of U.S. military facilities in Japan. 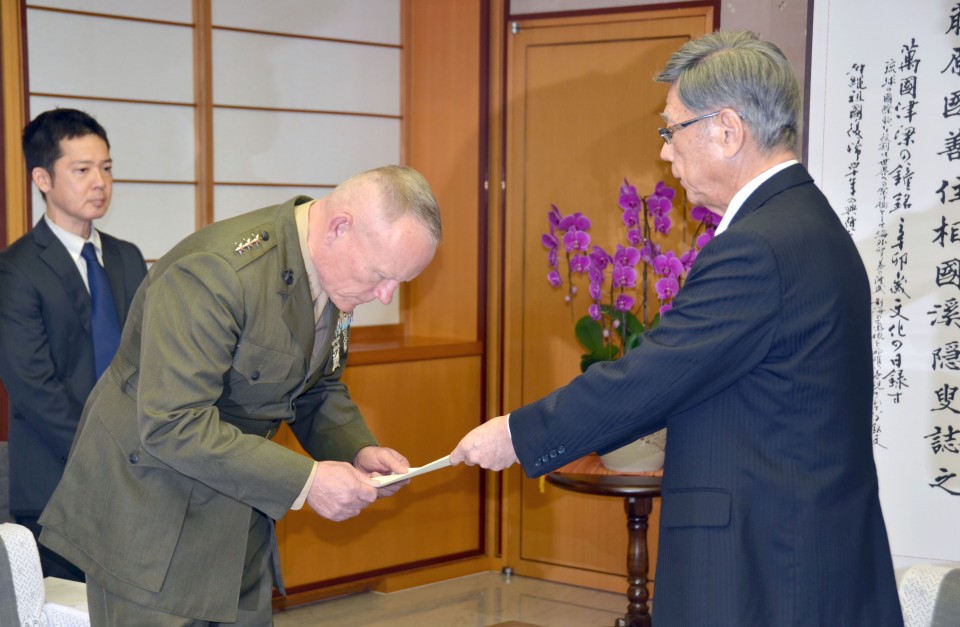 Lt. Gen. Lawrence Nicholson, the top commander of U.S. military forces in Okinawa, offered an apology to the family of the victim during talks with Onaga at the prefectural government office in the afternoon, adding that he "deeply" regrets the incident.

Nicholson also vowed to redouble efforts to reduce such accidents and other incidents. But Onaga said the past efforts to address drunk-driving by U.S. service members have been "extremely insufficient" and that Okinawans are "tired of" promises made by the U.S. military that it will work to prevent a recurrence.

"We don't think you are the 'good neighbors' (the U.S. military aspires to be)," Onaga said.

According to a statement issued by the U.S. forces in Japan, service members in Okinawa have been restricted to their bases and residences. Alcohol consumption has been prohibited in homes and public locations such as bars, clubs and hotels.

Military personnel in mainland Japan have also been prohibited from purchasing or consuming alcohol, the statement said.

The length of the ban is unclear.

The restrictions follow the accident Sunday morning in Okinawa's capital of Naha in which the Okinawan man was killed when his vehicle was struck by a 2-ton truck driven by a 21-year-old U.S. Marine based at the Makiminato Service Area in Urasoe, which is adjacent to Naha.

The U.S. serviceman was arrested by local police on suspicion of negligent driving resulting in death and driving under the influence of alcohol. The man was off duty, but the truck was a military vehicle.

Before he was arrested, the man admitted that he had been drinking beer on a U.S. base, according to the police.

Noting their contribution to the defense of the country, the U.S. forces in Japan said in the statement, "When our service members fail to live up to the high standards we set for them, it damages the bonds between bases and local communities and makes it harder for us to accomplish our mission."