U.S. President Donald Trump and first lady Melania met Japan's Emperor Akihito and Empress Michiko on Monday, during which the 83-year-old emperor looked back on the bilateral relationship.

During their 20-minute sit-down dialogue at the Imperial Palace, the emperor said, "Although the two countries have a history of fighting each other in war, Japan has become what it is now thanks to the friendly relationship afterward as well as support from the United States," according to an Imperial Household Agency official. 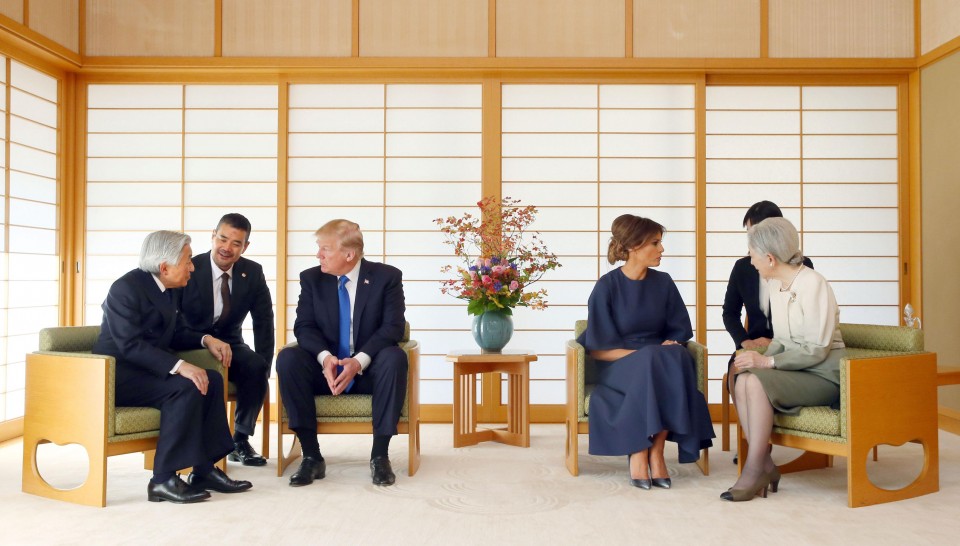 The meeting took place at the emperor's residence on the second day of Trump's first visit to Japan as American leader.

Asked about his visit, Trump said everything is going well and that Japan-U.S. ties have never been better than now, the official said.

Touching on the fatal shooting in Texas the previous day, Emperor Akihito said he sympathized with the president, who must be suffering great distress.

The president praised the emperor's residence and asked whether it was designed by the emperor himself.

It was designed by a Tokyo-based architect office and completed in 1993, according to the agency.

Trump's visit to Japan does not involve a banquet hosted by the emperor and empress as he is paying an official visit, rather than a state visit which typically includes such an event.

Barack Obama, Trump's predecessor, met the imperial couple and had lunch with them in November 2009 during his first visit to Japan as U.S. president.

Obama drew criticism from U.S. conservatives as he was photographed bowing deeply to the emperor.

The emperor is "the symbol of the state and of the unity of the people" of Japan, with no political power under the Constitution.

Trump did not bow as he shook hands with the emperor, who welcomed the U.S. couple in front of his residence.