The Japanese government on Monday began constructing more seawalls needed to make possible the move of a U.S. air base within the southern island prefecture of Okinawa, despite local opposition to the controversial transfer.

Tokyo pushed ahead with the work after the Okinawa prefectural government filed a fresh lawsuit against the central government in July, seeking a halt in construction to relocate U.S. Marine Corps Air Station Futenma. The case is still pending.

"We will continue to fight with full force," Okinawa Gov. Takeshi Onaga said.

The prefecture wants the base moved out of Okinawa altogether. Under the Japan-U.S. plan, the Futenma airfield is set to be relocated from the crowded residential area of Ginowan to the site adjacent to the Marines' Camp Schwab in the less populated Henoko coastal area of Nago.

The Japanese government began constructing seawalls on the northern side of a planned landfill area in April. On Monday, it began seawall construction at two more sites as it aims to accelerate the process in order to start filling in the area inside the seawalls in the summer of 2018. 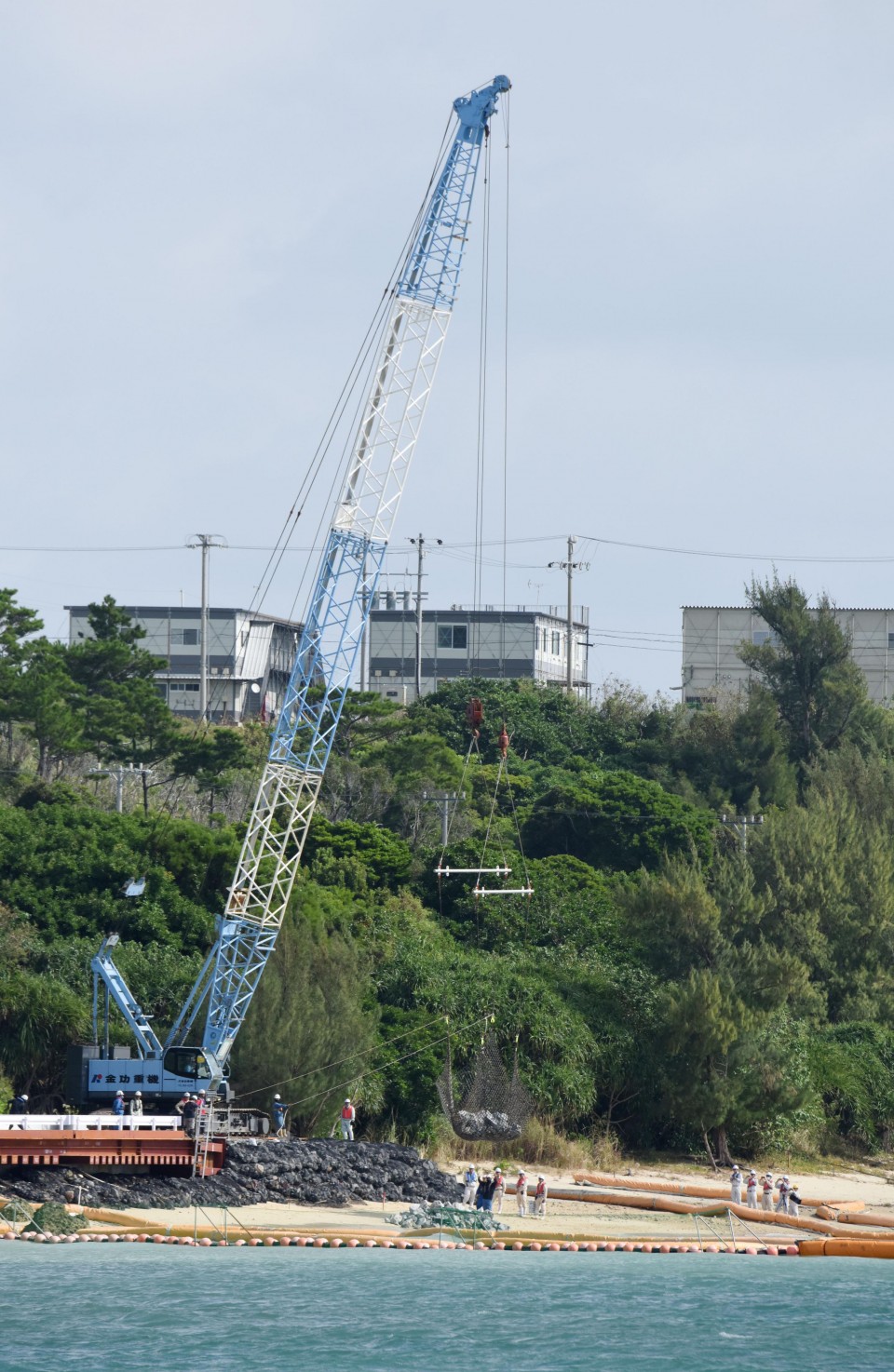 At about 10:30 a.m., cranes lifted bags containing crushed stones and dropped them in the water and around the foreshore.

"We will proceed with construction works by paying sufficient consideration to the surrounding environment. We want to achieve the return of the (land used for the) Futenma air base as soon as possible," Chief Cabinet Secretary Yoshihide Suga told a press conference.

Japan and the United States agreed on the return of the land used for the Futenma base in 1996 and announced in 2006 a road map for realigning the U.S. military presence in Japan, which included transferring the airfield to the Henoko coastal area.

Kazuo Senaga, the 54-year-old secretary general of an organization calling for removal of U.S. bases in Okinawa, said the construction reflects the central government's "uncompromising stance" despite the victory in the Oct. 22 lower house election of candidates opposing the base relocation in three of four constituencies in the prefecture.

"We will not give up until opposing views prevail across the country," he said.

At the seawall construction site, a coral designated as an endangered species has been found and the Defense Ministry's local bureau filed a request with the Okinawa government in October to move the coral for preservation.

The prefectural government is now examining whether to allow the coral to be moved, but a Defense Ministry official said the current location of the coral would not affect seawall construction works for the time being.

The area has also been identified as habitat for a species of dugong, a marine mammal that grazes on seagrass.

The dugong has cultural meaning among Okinawa's indigenous people and is considered critically endangered by the Japanese Environment Ministry and vulnerable by the International Union for Conservation of Nature and Natural Resources.