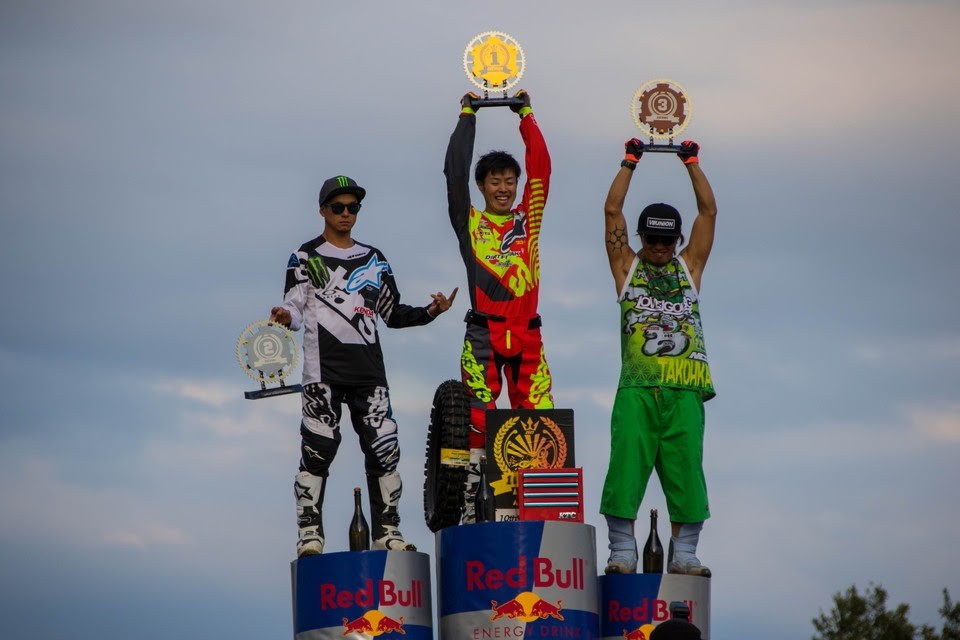 Ahead of Japan’s largest freestyle motocross (FMX) event, FMX pioneer and legend, Sato Eigo, said of the sport that, “There's not enough competition in Japan.  We need to foster more of it.", so setting the mood for what turned out to be a heated contest at Kawagoe's "Off Road Village" in Saitama, during which rider HTC (Takahashi Hitoshi) wrote a new chapter in the history of the sport after he took out incumbent champion DAICE (Suzuki Daisuke) in the semi-final and KOTA (Kugimura Kota) in the final.

The 2017 edition of GOBIG was the event's 10th outing with the previous nine having been dominated by the sport’s "big three" riders - Sato Eigo, Suzuki Daisuke, and Kugimura Kota, until 2017 the only riders to have claimed titles at the championships.

Such a backdrop of dominance didn’t seem to phase an excited HTC who, during the qualification rounds, told press to, "Please look forward to tomorrow (finals day)." The rider quietly brimming with the kind of confidence that comes when you can boast of a “double-grab backflip” among your arsenal of tricks.

Despite recording only a 5th place in qualification HTC came through the early rounds on finals day to set up a kind of “master” vs “apprentice” showdown with DAICE in the semi-final.  The outgoing champion having come through his round one battle after opponent GONTA fell on a landing and was stretchered off in front of a worried crowd. 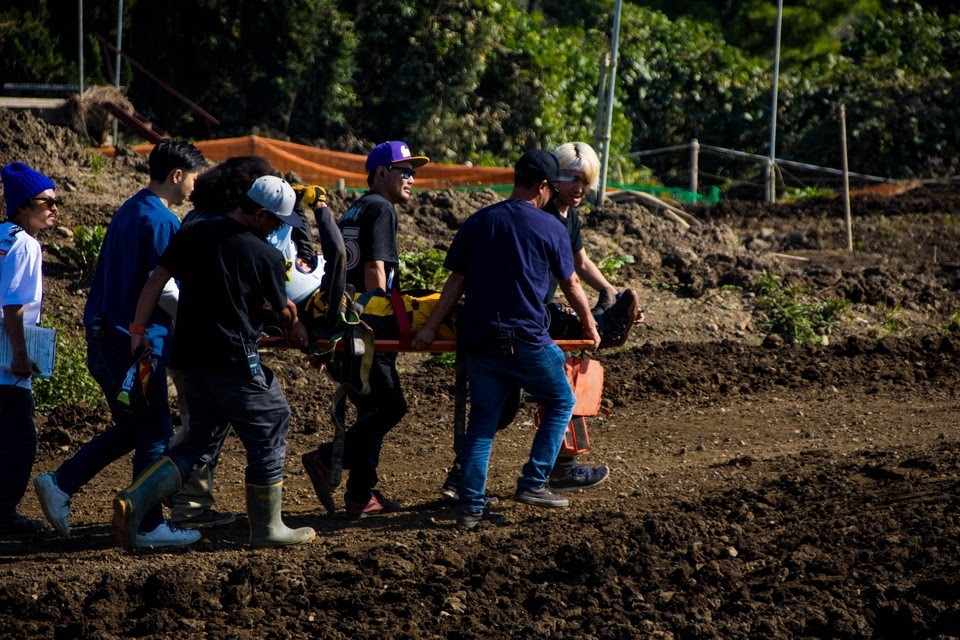 FMX rider GONTA gives the "OK" sign while being strechered off after his first round defeat to DAICE.

Emerging victorious HTC had overcome, in DAICE, arguably the toughest hurdle in his attempts to wrest control of this year's GOBIG from the traditional “big three”, but the rider still had to get past KOTA in the final. 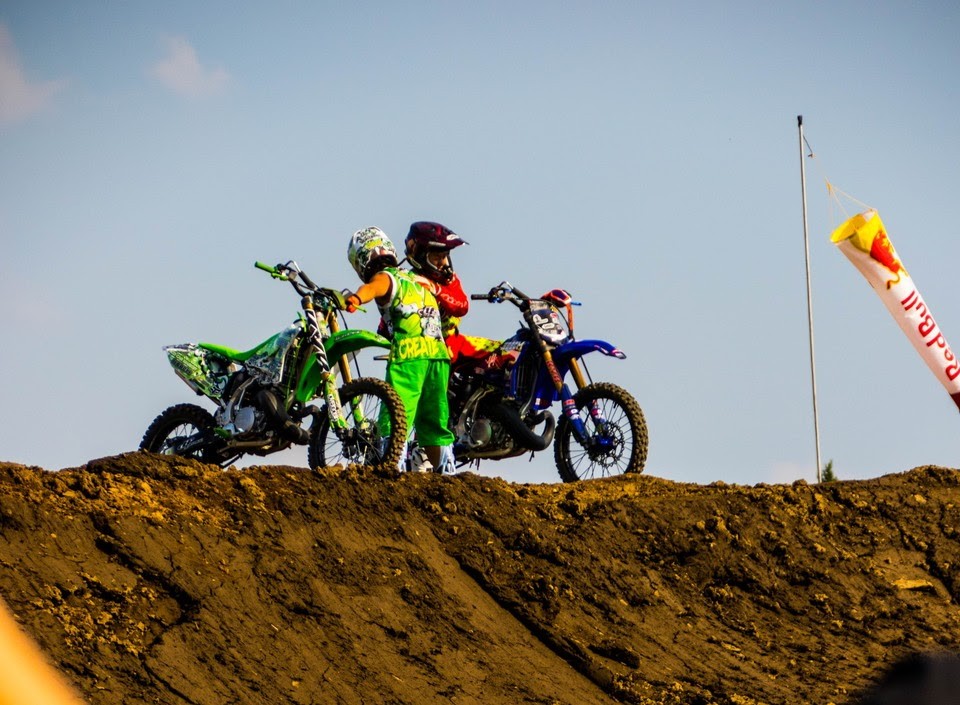 DAICE (left) and HTC (right) embrace after their semi-final.

With the wind picking up just before the final showdown and both finalists free to choose tricks HTC started the first of his three runs with a massive “whip”, following it up with a “KOD indy flip”.  In keeping with the way all the riders had been pushing themselves to the limit during the contest, HTC finished off his runs with a perfectly made “double-grab flip”. 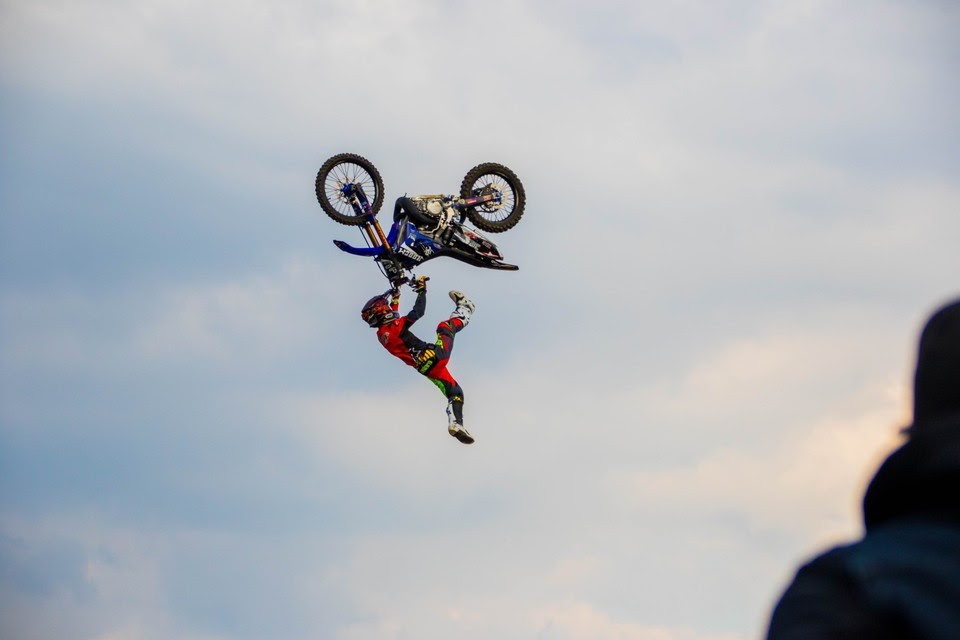 HTC takes to the air during the GOBIG finals.

KOTA followed in similar fashion opening up with a "whip", going on to round off his runs with a “cold bar flip” and “KOD flip” reaching levels of perfection as yet unseen at this year's GOBIG. 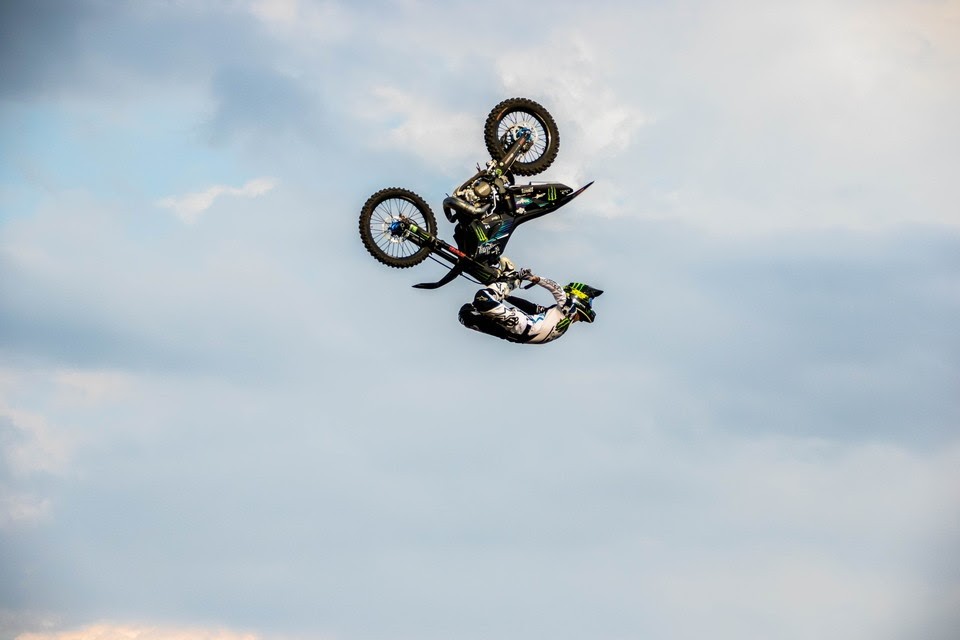 With contest judges favoring riders who pushed the limits however, it was HTC who came out victorious to claim the GOBIG title, on the back of his audacious “double-grab flip” in such windy conditions, a trick completed by only a few riders to date.

Such was the close nature of the final though, a different day and a different set of judges may have turned out a different result.  As it was, HTC brought to an end an era of dominance by FMX Japan’s “big three”.