South Korea invited Tuesday a former "comfort woman," who has spoken widely of her suffering from being forced into sex slavery by the Japanese during World War II, to a state banquet it hosted for U.S. President Donald Trump.

The invitation prompted Japan to lodge what an aide to Prime Minister Shinzo Abe describes as a "protest" to South Korea through diplomatic channels.

South Korean President Moon Jae In's office made the announcement about her participation, just ahead of his talks in Seoul with Trump, who arrived earlier in the day from Tokyo as part of his five-nation Asian tour.

The attendance of the 88-year-old Korean woman, Lee Yong Soo, at the banquet, which was later confirmed, may complicate South Korea's ties with Japan and their joint efforts with the United States to rein in North Korea's nuclear and missile programs. 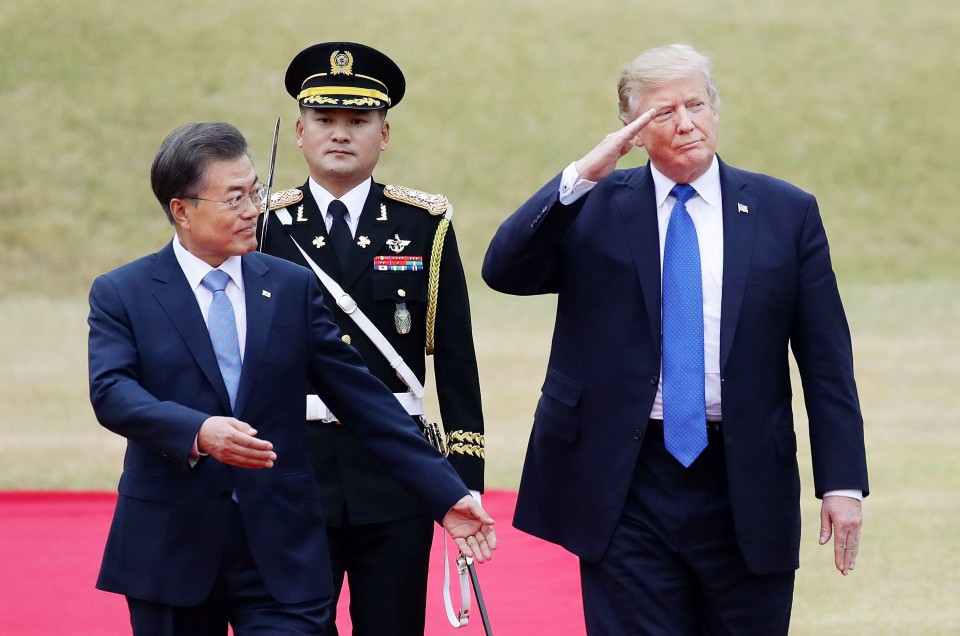 Japan and South Korea reached an agreement aimed at "finally and irreversibly" settling the so-called comfort women issue in 2015.

Japanese officials view the invitation of Lee, one of the most vocal critics of Japan's handling of the issue, to the event as running counter to the spirit of the agreement.

A South Korean official, however, said it merely reflects his government's efforts to ensure a "balanced viewpoint" in the United States regarding to this "historical issue" between Seoul and Tokyo.

Standing next to Moon, Trump hugged Lee and shook hands with her, according to photos released by South Korea's Yonhap News Agency.

The dinner menu also listed a Korean dish using "Dokdo shrimp" which come from waters around a pair of islets that are at the center of a territorial dispute between Japan and South Korea.

The South Korea-controlled, Japan-claimed islets are known as Takeshima in Japan.

Japanese government officials are puzzled over South Korea's decision to raise such thorny political issues during Trump's visit at a time when ties between Tokyo and Seoul have been improving.

"We will continue to take every opportunity to resolutely appeal to South Korea to steadily implement the agreement," Chief Cabinet Secretary Yoshihide Suga told a routine press conference.

"We have explained our position to South Korea through diplomatic channels," Suga said, while noting that the agreement has been praised by the international community.

The spokesman had a stronger response to the choice of using the shrimp, saying, "I wonder about that."

"At a time when stronger coordination between Japan, the United States and South Korea is required to deal with the North Korea issue, and when President Trump has chosen Japan and South Korea as the first stops on his trip, there is a need to avoid making moves that could negatively affect the close coordination between (the three countries)," he said.

Trump is the first sitting U.S. leader in 25 years to come to Seoul in the format of a "state visit."

Lee is one of about 70 guests the South Korean side has invited to the banquet and she will be sitting at the same table with White House Communications Director Hope Hicks and others, according to Moon's office.

In addition to visiting foreign countries to talk about her grim experience, Lee has criticized the Japanese government and South Korea's previous administration for striking the deal on the issue, a protracted sticking point in bilateral relations.

The dispute over "comfort women" -- a euphemism used in referring to those recruited mostly from Asian countries to provide sex to Japanese soldiers during the war -- has been one of the major issues that have frayed Tokyo's ties with Seoul.

Lee and others have slammed the 2015 agreement as not reflecting the feelings of former comfort women.

Japan has asked Moon's administration to uphold the accord, under which Tokyo provided money to a fund to assist the women and Seoul promised it would strive to settle the issue in consultation with civil society organizations at home.