Toshiba Brave Lupus forward Michael Leitch will lead Japan in their upcoming four matches, head coach Jamie Joseph announced Thursday in naming his 34-man squad for the game against a World XV and tests against Australia, Tonga and France.

Leitch had made himself unavailable for national selection following the 2015 Rugby World Cup but returned to the international fold in June and will be the man to lead Japan to the next World Cup, Joseph said.

"He is our best leader," Joseph said. "He has shown in the past the players will follow him. He is comfortable with the role both on and off the field and leads from the front. He is exactly what we want leading into 2019."

Joseph said Leitch's appointment would allow Panasonic Wild Knights hooker Shota Horie -- who led the side last year along with Harumichi Tatekawa in Leitch's absence -- to simply concentrate on his game.

Tatekawa, meanwhile, was named as a co-captain to ensure some of the responsibility of leading the side is shared, but the 27-year-old center is set to miss the games against the World XV and the Wallabies after picking up an injury playing for Kubota Spears last weekend.

Tatekawa's ill fortune means there is a recall for Yamaha Jubilo center Male Sa'u as Joseph looks to balance the youth of players such as Tokai University's Ryuji Noguchi and Kubota Spears rookie Sione Teaupa with some experience.

Teaupa is one of six uncapped players in the squad and the only back yet to play test-match rugby. 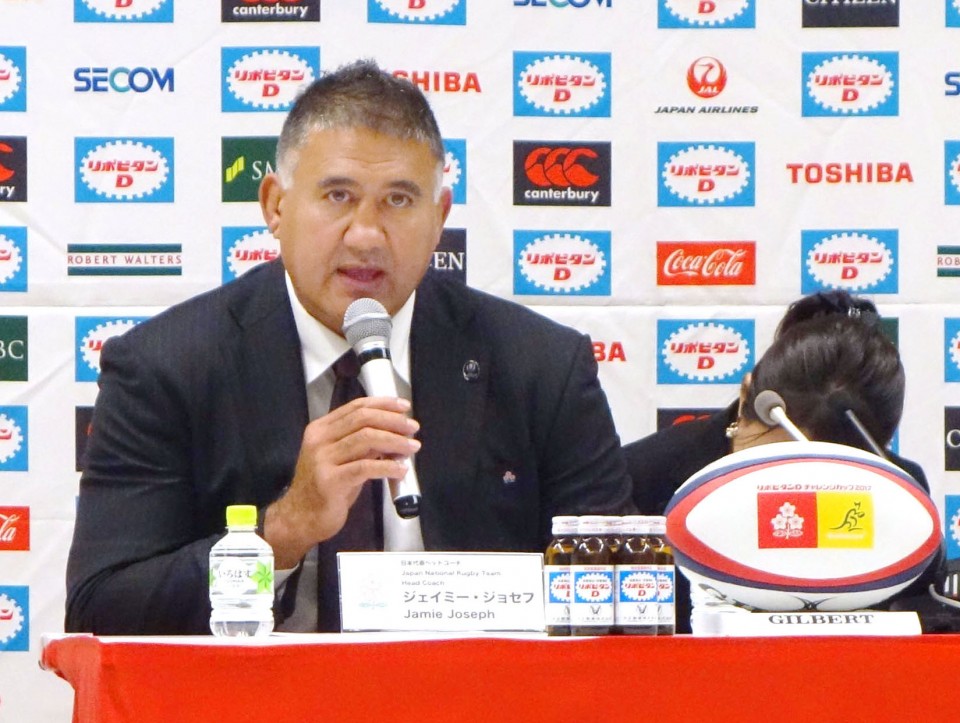 "Himeno has huge potential and can play lock, flanker and No. 8," said Joseph. "He is very physical and can develop into a very good player."

Van der Walt, like Himeno, can cover second and back row and Jospeh said versatility was a key component regarding selection.

"Outside the specialist positions of front row and halfback, I am looking for players who can play a number of positions. In a World Cup you can suffer from injuries so it is a real advantage and I have selected the team with that in mind."

In the backs, Rikiya Matsuda (Panasonic), Ryoto Nakamura (Suntory Sungoliath) and Yu Tamura (Canon Eagles) can all play 10 and 12, with the former a problem position for Joseph.

"Kosei Ono would have been selected but he has had an ongoing neck injury and has decided he does not want to risk it at international level so has withdrawn," Joseph said of the Suntory pivot.

Olympian Lomano Lava Lemeki has fully recovered from the knee injury he picked up against Georgia in 2016 and the Honda Heat wing will be looking to add to the three tries he has scored in two tests, though he faces tough competition for a spot in the starting XV with the Panasonic pair of Kenki Fukuoka and Akihito Yamada in such fine form.

Joseph's squad will gather in Munakata, Fukuoka Prefecture on Sunday to prepare for the matches and meet their new defense coach, John Plumtree.

"We have shown we can score tries against anyone but defense has been a real challenge for Japanese teams against top sides," Joseph said. "John will improve our defensive game immensely."

The Brave Blossoms play the World XV at Fukuoka's Level 5 Stadium on Oct. 28. They then play Australia on Nov. 4 at Yokohama's Nissan Stadium -- the first time the venue for the 2019 Rugby World Cup final will host a test match.

The team then travels to France where they will play Tonga on Nov. 18 at Stade Ernest Wallon in Toulouse and France a week later at the U Arena in Nanterre, on the outskirts of Paris.