Japanese Defense Minister Itsunori Onodera said Friday he expects the U.S. military to suspend flights of its CH-53E transport helicopters in Okinawa for an "indefinite period," after one recently crash-landed, raising safety concerns among local residents.

The view seemingly conflicts with the announcement by the U.S. Marine Corps in Japan the previous day that it directed a "96-hour operational pause" for all CH-53E helicopters stationed in the southern island prefecture to ensure they are safe to operate

But Onodera emphasized that he had agreed with the deputy commander of U.S. Forces Japan during their talks in Tokyo on Thursday that no timeline was set for the operational pause.

"I asked (Maj. Gen. Charles Chiarotti) that the period (of the pause) would be until safety is ensured, and the deputy commander said that's right," Onodera told reporters.

The accident occurred Wednesday afternoon, with a CH-53E catching fire in midair during a training flight and bursting into flames as it made an emergency landing in a field near the U.S. Northern Training Area on the main island of Okinawa.

None of its seven crew members or local residents was hurt, but the latest accident, which follows the crash-landing of a U.S. military Osprey aircraft off the Okinawa main island in December, led the prefectural government to lodge a strong protest.

"One wrong move could have triggered a serious accident involving civilians. This incident adds to concerns of the people in the prefecture who live side by side with U.S. bases," Okinawa Gov. Takeshi Onaga said in a statement addressed to Onodera.

The statement also said locals "cannot help but feel strong doubts over the U.S. military's aircraft maintenance and safety measures" and demanded that CH-53Es be grounded until the cause of the accident is identified and "effective" preventive steps are taken.

Receiving the document from a senior Okinawa government official, Parliamentary Vice Defense Minister Tatsuo Fukuda said he is aware of the frequency of incidents involving U.S. military aircraft and acknowledged the importance of reassuring the Okinawa people over the safety of U.S. forces' activities.

Many Okinawans have long been frustrated with noise, crimes and accidents connected to U.S. bases, with the prefecture hosting the bulk of U.S. military facilities in Japan.

Over the past several months, Ospreys based at U.S. Marine Corps Air Station Futenma in Okinawa made a series of emergency landings. One crashed off the eastern coast of Australia in August, leaving three U.S. Marines dead.

The helicopter that crash-landed Wednesday also belongs to the Futenma base. The CH-53E is a large transport helicopter used by U.S. Marines, which can carry up to 55 personnel in addition to seven crew members.

On Friday morning, four Japanese Self-Defense Force members with expertise on helicopters visited the accident site in the village of Higashi to gather information on the incident.

Guided by U.S. military personnel, the SDF members walked around the wrecked aircraft to check the situation themselves.

But it remains unknown to what degree Japan can get involved in probing the cause, as Japanese authorities do not have the power to search or seize U.S. military assets without consent under the Japan-U.S. status of forces agreement.

Onodera told reporters the SDF experts are dealing with the issue so the investigation into the incident will not be a mere formality. 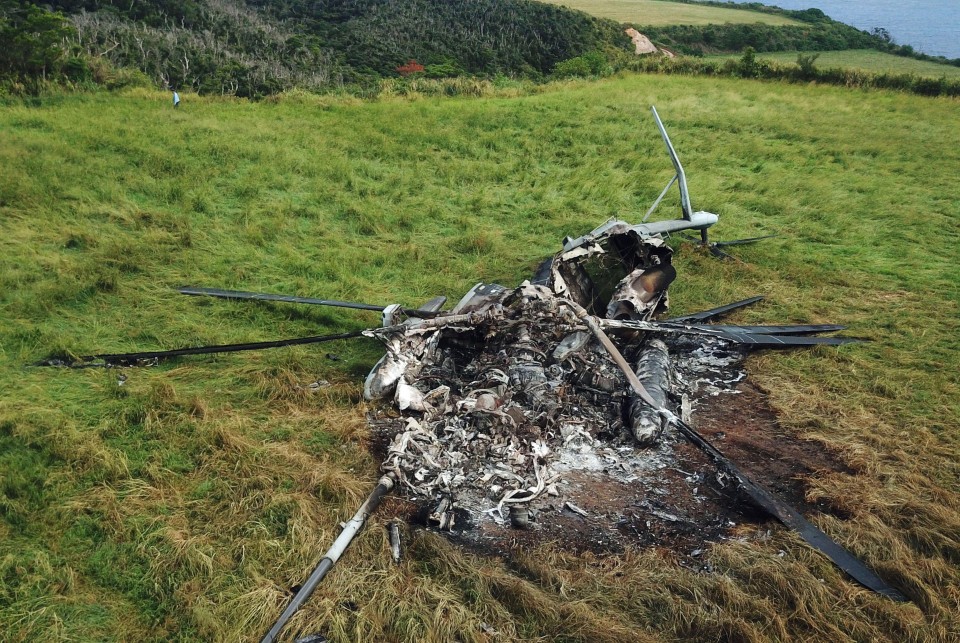