Katsura Sunshine has come quite a way from his days listening to Japanese "rakugo" comic tales at a local yakitori skewered chicken restaurant where he was introduced to the ancient traditional art form almost 20 years ago.

One might never guess that the 47-year-old Canadian from Toronto is poised to introduce Americans to Japanese culture by performing the craft at an off-Broadway theater in New York City in mid-November, as the first foreign rakugo storyteller in post-war Japan. 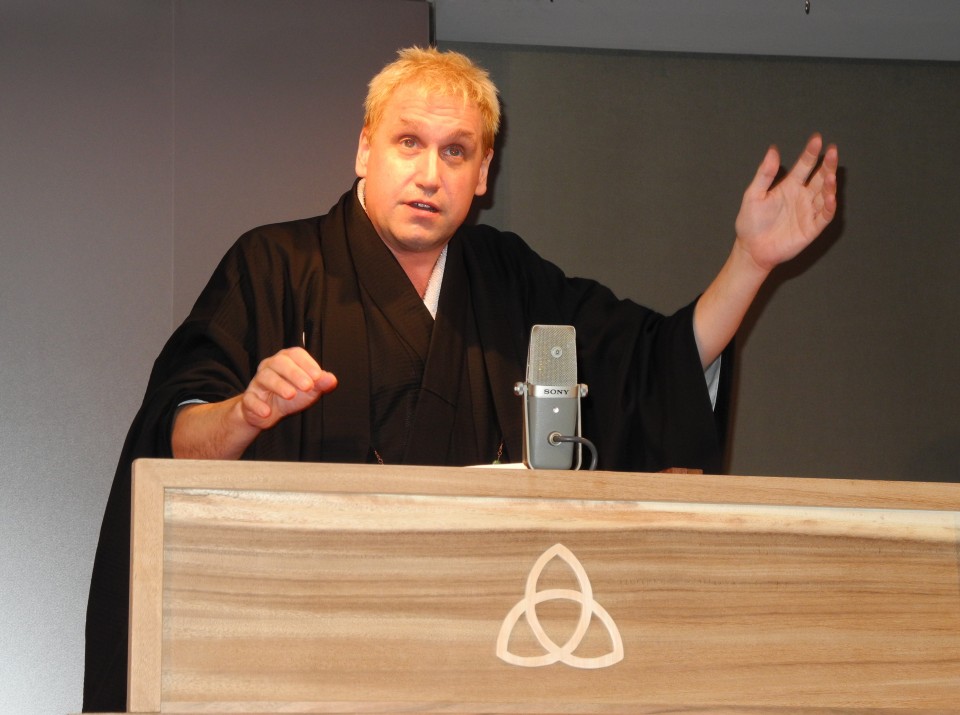 Sunshine himself, whose real name is Gregory Robic, never imagined he would live the life he leads now, devoted to mastering a 400-year-old art form in the East while taking on the challenge to convey it to the West, and raising the necessary funds for the production through mainly Japanese investors.

But you could say he was destined for the life from the start.

"I decided to stay for the rest of my life in Japan only three days after my arrival (in 1999)," Sunshine recalled, describing his fascination with the country, its people and culture.

Rakugo, in its essence, incorporates everything he learned through the study of ancient Greek comedies -- something he discovered during his rakugo apprenticeship, he explained at a presentation for around 50 potential investors and sponsors in Tokyo in early September.

He initially planned a six-month visit to appreciate Japan's traditional theater arts Noh and Kabuki after reading text from a scholar about a commonality that exists in traditional Japanese art forms with the old European dramas of more than 2,000 years ago.

Sunshine first encountered rakugo in a small tatami room on the second floor of a yakitori restaurant in his neighborhood near Yokohama Station, where he used to dine out "eight times a week." Performances at his local haunt, which as is customary in rakugo featured a lone storyteller who sits on stage telling long and winding comical stories, instantly grabbed him.

Robic was given the name Katsura Sunshine during his three-year apprenticeship through 2011 under shisho (master) Katsura Sanshi, now Katsura Bunshi VI, a renowned rakugo artist and Japanese TV personality. The stage name "Katsura" has been passed down through the generations and only bestowed upon the most venerable rakugoka, literally "person of the fallen word."

According to Sunshine, Bunshi has composed at least 270 original rakugo stories. Those stories, which inspired him further, are the basis for his comedy today.

"When I first saw his performance, I knew I wanted to be his apprentice and do his stories abroad," Sunshine said in an interview with Kyodo News.

About two years ago, Sunshine set a fundraising target of $750,000 for his planned performances in New York City, a mecca of music, theater, and performing arts in the West.

Through dinners with prospective investors and sponsors almost every day over the past year, he has raised about 80 percent of the targeted funds for the project.

A 45-year-old Japanese man, who works for an investment management company in Tokyo, has decided to help Sunshine reach his milestone, offering 1.5 million yen (about $13,350) out of pocket.

The man said he was impressed by Sunshine's passion and rakugo performance, and the way in which he skillfully handles both English and Japanese to make audiences laugh.

"I could easily imagine how hard it is to overcome cultural barriers and convey our culture to foreigners through foreign language," said the man, who grew up overseas and now sells Japanese stocks to investors in the Middle East and Europe.

"I truly respect his efforts and his talent that goes far beyond our level to reach foreigners. I also feel thankful that he could spread our culture abroad in our stead," he added. 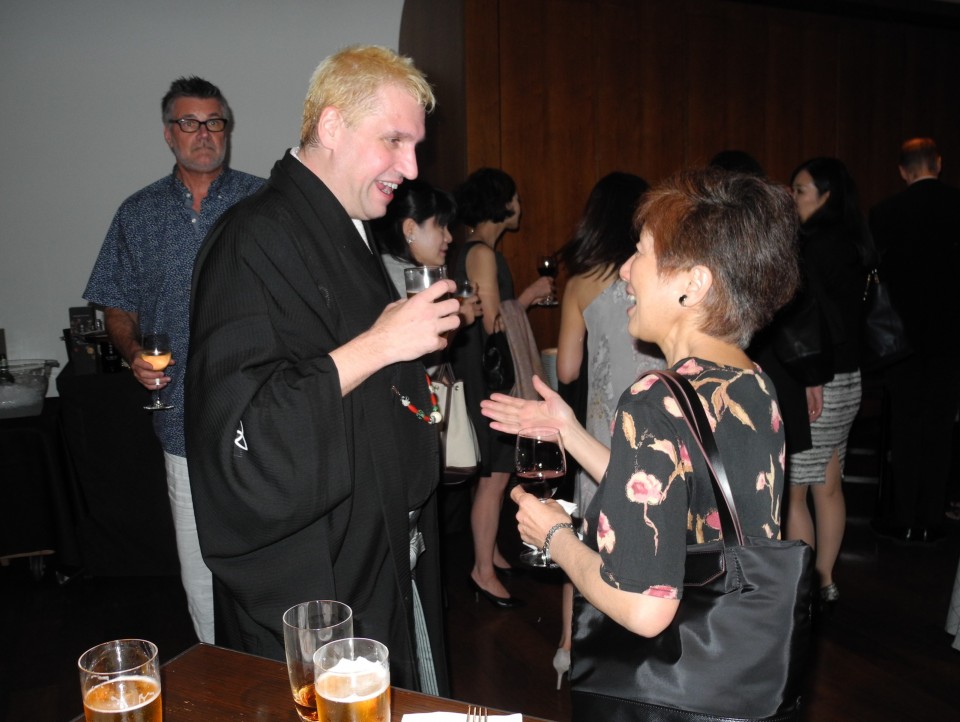 According to Marie Fukuda, the manager for fundraising and stage management, 20 to 30 people of various ages have agreed to support Sunshine, with one wealthy individual investor pledging several tens of millions of yen for the highest amount so far.

Most of the investors come from the Japanese business sector and have experienced both success and failure through various challenges in their life, Sunshine said.

To meet the costly expenses associated with a theater production, a show's creator usually will put on one or more "backers' auditions," or minimal shows, including a general audience, to spark investor interests.

Sunshine's "hugely significant" backers' audition will be shown at SoHo Playhouse on Vandam Street in New York City in November. The shows are planned to run for at least three months. Given the proper backing, Sunshine intends to continue his performances in the city.

"It is like time travel. I want to deliver this to New Yorkers." If successful, he is planning a tour of Europe.

He wrote musicals and theater when he was young and dreamed of performing on Broadway one day. Ironically, he never thought rakugo would help him restore that dream, since he believed that he would only perform in Japan for the rest of his life.

"I thought when I became a rakugoka that I was giving up my dreams of Broadway or London. I did not think that rakugo would bring me to off-Broadway. This is a big surprise for me. I got back to my original dream," he said.