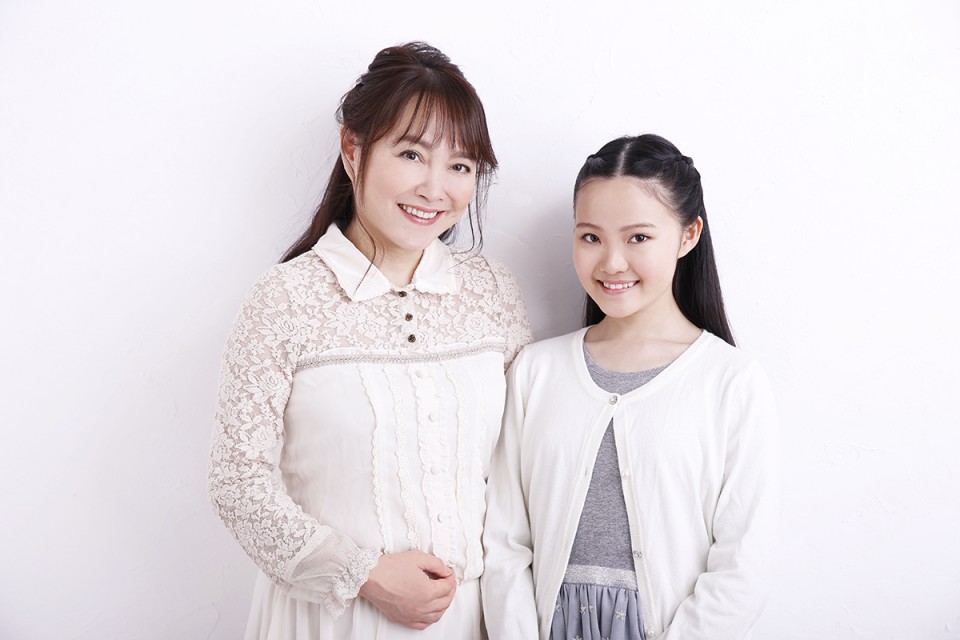 Ahead of their scheduled appearance at this year’s J-POP SUMMIT in San Francisco, California KKS had chance to interview Japanese singers Azumi Inoue and daughter Yuyu. Inoue is best known for her work on features from Studio Ghibli and can list vocals on songs from Laputa: Castle In The Sky and My Neighbor Totoro among her singing credits. Inoue’s daughter, Yuyu, made her singing debut on NHK’s Minna No Uta, at the age of seven.  The pair have since gone on to perform as a duet on the long-running show.

We started our interview with some questions for Azumi ..

Can you tell us how you began singing the songs on the works of director, Hayao Miyazaki?

Azumi: I took the audition of “Kimi wo Nosete [Carrying You]” which was in Laputa: Castle In The Sky. Three years after I debuted as an idol, I hadn’t gained much popularity, and the contract with my record company / affiliated office expired.  I was wondering what to do.

What was your first impression of Miyazaki?

Azumi: I thought that he was a warm person, like a principal of a rural school.

Please tell us the most challenging songs of Miyazaki's work so far.

Azumi: I haven’t had that much difficulty because every song fitted me perfectly.  If I dare say, “Meguru Kisetsu-Changing Season”, that is the insert song of “Kiki’s Delivery Service”, was originally played with the violin, pizzicato. I thought it was difficult because the song could be sung in various ways.

You have a career spanning over 30 years, please tell us the secret to keeping a beautiful singing voice for such a long time.

Azumi: First of all, I keep handwashing and gargle so as not to catch a cold. Also, even in summer I take a bath, stretch and jump rope every day and do 30 sit-ups every morning. I am doing a lot.

You are playing live concerts in many parts of the world.  Where has been the most impressive place?

Azumi: I had so many happy, and awful, experiences from my shows, it is tough for me to choose the most impressive place. [Laughs].  But, it was around 20 years ago, I was performing shows in concert halls mostly, and I wasn’t performing at the free events. At that time I had a chance to play at a local shopping center. One mother, carrying a baby on her back and holding a kid around the age of four to five years old, came to the autograph session and she said to me, "I have been too busy raising children to go to concerts. But I have loved your songs for a long time. I can’t believe that I could listen to you live in my neighborhood. Thank you so much for coming!" She shook hands with me and was crying. Then I thought that I have to sing in more places. It was a very moving experience.

As for overseas concerts, there were 3,000 visitors gathered at the JAPAN EXPO in Paris, France (2015) and it was here that I started full-scale international performances and after that I had ten shows throughout China in two weeks. They were really impressive shows.

You go to concerts and musicals many times a year. Who is your favorite artist?

You were singing the theme song of Takashi Murakami's animation "Kaikai Kiki". Can you tell us which song?

Azumi: You researched very well.  [Laughs] The song title is the same as Kaikai Kiki. The song was used in the solo exhibition; I think that it did not get released.  I recorded the song in just one day after my daughter was diagnosed with leukemia.

What do you do when you are not doing anything that is related to music.

Azumi: Watching movies on Apple TV, reading comics, or sleeping. [Laughs] Of course, my daughter is still in junior high school, so I am also doing the role as her mother properly.

Now, Japanese animation, Anisong, voice actors are very popular all over the world, what do you think about that?

Azumi: I am thankful to the predecessors who have been creating the anime scene for a long time. Even when I was singing Laputa: Castle In The Sky and Totoro songs, it was still not a boom.

In 2003 you sang on rock band Janne Da Arc's album as part of a chorus. Would you like to sing other genres of songs aside from anime and children's songs?

Here at KawaiiKakkoiiSugoi we are introducing Japanese cute, cool, and amazing things to the world, please tell us what is cute, cool and amazing for you.

Azumi: I think that people who are expressing themselves as freely as they like or in whatever way suits them best are cute, cool, and amazing.

What are you looking forward to the most at the J-POP SUMMIT?

Yuyu: This my first time to come to America, I could be wrong but American people seem to be cheerful and excitable, so I look forward to doing my performance the most so I can see how excited the audience get.

You have been recording since you were three years old.  When you were singing in front of people, did you not get nervous?

Yuyu: I think that I was probably nervous, but I don’t remember much about the first time, and I’ve since become someone who doesn’t get so nervous.

"6-year-old Ballad" is a great song, did you feel like the lyrics of that song describe, when you were six years old?

Yuyu: The song was written after the songwriter interviewed me and asked me, "What is your favorite food?" or " Do you have the favorite boy?".  So the lyrics mostly reflect the real me at that time.

You are playing live concerts with your mother Azumi, do you have any ways that you think you are similar to your mom?

Yuyu: People are telling my smile is becoming like my mother’s, a lot.

Do you fight with your mom?

What genre of music do you want to perform?  Do you have any artists that you aspire to?

Yuyu: I want to do a musical. I do not have any particular goals, but I would like to be a singer who can sing like a magical flute, perfectly.

Please tell us your about your favorite anime?

Yuyu: Himouto! Umaru-chan, The Royal Tutor, Black Butler, … .  Although it’s not an anime, I like the manga called “W Juliet” the best!

Who is your favorite artist?

What is your favorite thing other than music?

Yuyu: Kawaii (cute) is a stuffed animal, Kakkoii (cool) is a 2D (idol), and the Sugoi (amazing) is the music and creativity of classical music (Bach or Mozart ...) that is timeless even now after hundreds of years have passed.

Our thanks to both Azumi and Yuyu.

J-POP SUMMIT, one of the largest celebrations of Japanese pop culture in the world, will be held over September 9 and 10 at San Francisco’s Fort Mason Center For Arts and Culture’s Festival Pavilion.