Shinji Okazaki struck minutes after kickoff but Leicester City went down 4-3 at the hands of Arsenal as the new Premier League season got under way on Friday.

Okazaki equalized for the visitors in the fifth minute at the Emirates to cancel out the opening goal for Arsenal's summer signing Alexandre Lacazette, who netted after just two minutes. 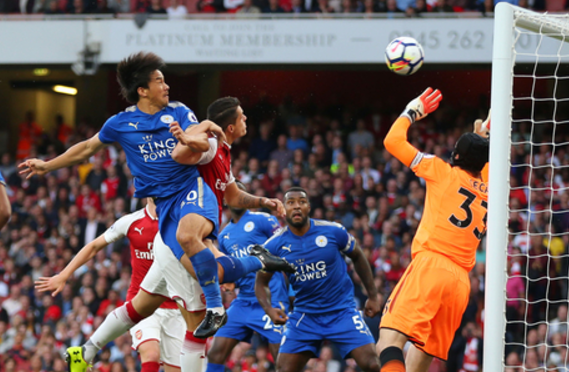 Leicester moved in front through Jamie Vardy just before the half-hour, but the Gunners made it 2-2 going into the break with Danny Welbeck opening his season account in injury time.

Vardy scored again on the other side of halftime after 56 minutes to put Leicester ahead once more. Arsene Wenger's men, though, would have the last laugh as Aaron Ramsey leveled seven minutes to time before substitute Olivier Giroud won it in the 85th.

Okazaki, who headed home by the far post from a short corner, was pleased he scored on opening night but was not about to get carried away.

Arsenal staged their fightback after Okazaki came off in the 72nd minute.

"It never hurts to get your first goal early on in the season," said Okazaki, whose side host Brighton next weekend in their home opener.

"But I haven't been able to score on a consistent basis, which is something I need to be able to do."